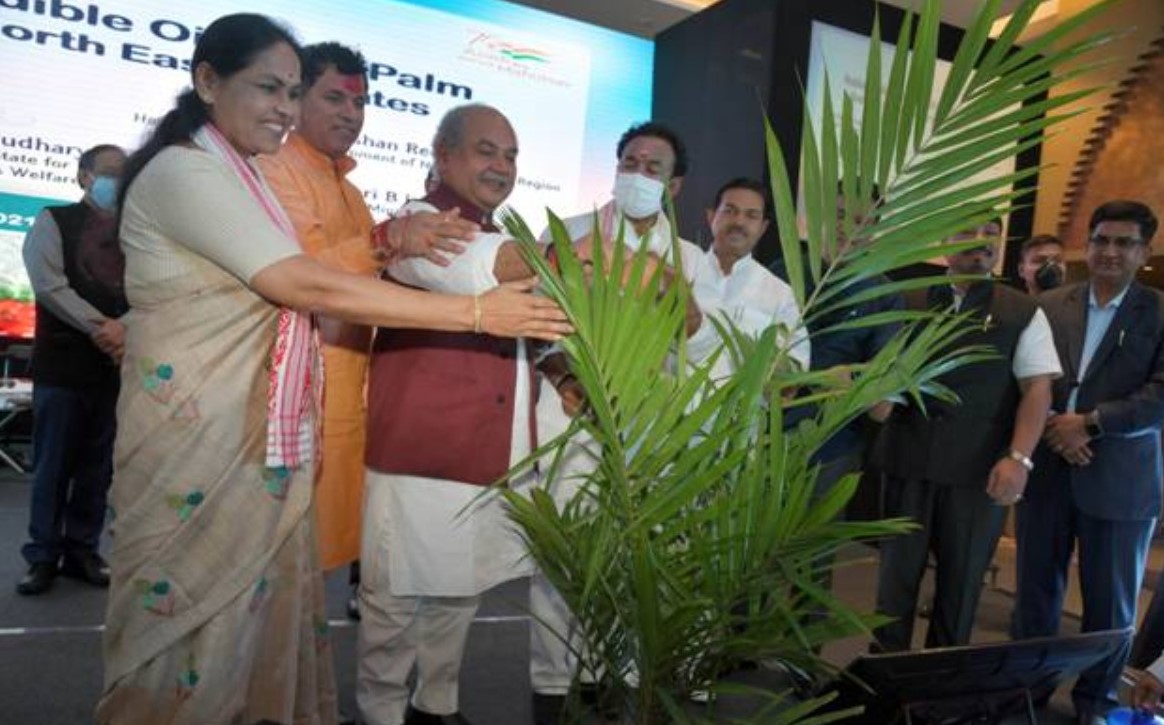 New Delhi: National Mission on Edible Oil- Oil Palm Business Summit for North Eastern States was held at Guwahati Today. Keeping in view the vision of the Prime minister for holistic and balanced progress of North East, the conference began under the chairmanship of the Union Agriculture Minister Shri Narendra Singh Tomar with the watering of the oil palm plant and showcasing of a film on oil palm plantation.

The Union Minister of Agriculture & Farmers Welfare Shri Narendra Singh Tomar asserted that the Government’s decision for making major intervention in North Eastern states for oil palm promotionwill turnNE states into oil palm hub of the country. Shri Tomaremphasized on playing an equal role for the development of the crop and assured to make major investments for seed nursery, drip irrigation, technical back up, setting of mills, purchase centers and training of farmers.Special package and assistance for NE states will change the socio-economic status of the farmers and will open employment opportunities in the established oil palm mills along with infrastructure development, said the Union Agriculture Minister.

The Union Minister also informed that the business summit has been aimed to explore the target of area expansion, seedling requirement fixed for different states through processors, details of viability gap payment,interventions and assistance under the mission.

Shri Tomar informed that the Mission with a total outlay of Rs 11040 crore will bring additional area of 6.5 lakh hectors under Oil Palm plantation with 3.28 lakh hectors in North Eastern states and 3.22 in Rest of India in next 5 years.

The Union Agriculture Minister thanked the government of Assam for providing logistical support and mentioned that the new scheme will definitely pave the way towards self-sufficiency in edible oils and put India on a road of Aatmarnirbharta. He stated that the Government is committed to protect the oil palm farmers through the price assurance and was happy to see the huge turnout for the summit. He expressed happiness with the format and mentioned that this type of exchange helps to speed up the implementation of NMEO-Oil Palm. Shri Tomar assured that under the Mission, oil palm farmers will be provided all needed assistance.

Shri G Kishan Reddy, Union Minister, DoNERappreciated the vision of the Government of India for coming up with the very well planned Edible Palm Oil scheme which is a win-win for the farmers and as well as for development of the region. The DoNER Minister said that the Narendra Modi Government is committed for the development of the oil palm sector and requested investors and industrialists to invest in North Eastern region which have immense potentials for agricultural sector, especially palm oil.

Secretary AgricultureShri Sanjay Agarwal set the tone for the summit by outlining the vision of the government and Secretary DAREDr. T. Mohapatra explained in detail the role of R&D for success of the mission. Smt Shubha Thakur, Joint Secretary gave a presentation on the outline of the mission. She explained in detail regarding the viability gap funding and assured price to the farmers.

Certificates for FPOs formed by NABARD were distributed and an MOU was signed with ABPRL andNumaligarh Refinery to establish the first-of-its-kind bio refinery in India to produce renewable green fuel bio ethanol.In the Summit, books titled “Glimpses of NMEO-Oil Palm in NE States” by Oilseeds Division, DA&FW and “Improved Management Practices of the Oil Palm Cultivation in NE States” by ICAR-IIOPR and Assessment Report were released.

Chief Minister of Arunachal Pradesh Pema Khandu, in his speech, said that it was time for investors to come and invest in NE in a big way to develop the agriculture sector, taking advantage of fertile lands and climate. Palm oil holds special significance as its cultivation can open up untapped avenues of earning for farmers in North East, he said.

Agriculture Minister, Govt. of Assam AtulBora informed that presentlyfarmers in two districts of Assam -Goalparaand Kamrup– are engaged in oil palm cultivation whilethere is a plan of bringing 1500 hector of lands in another 17 districtsunderpalm oil cultivation.