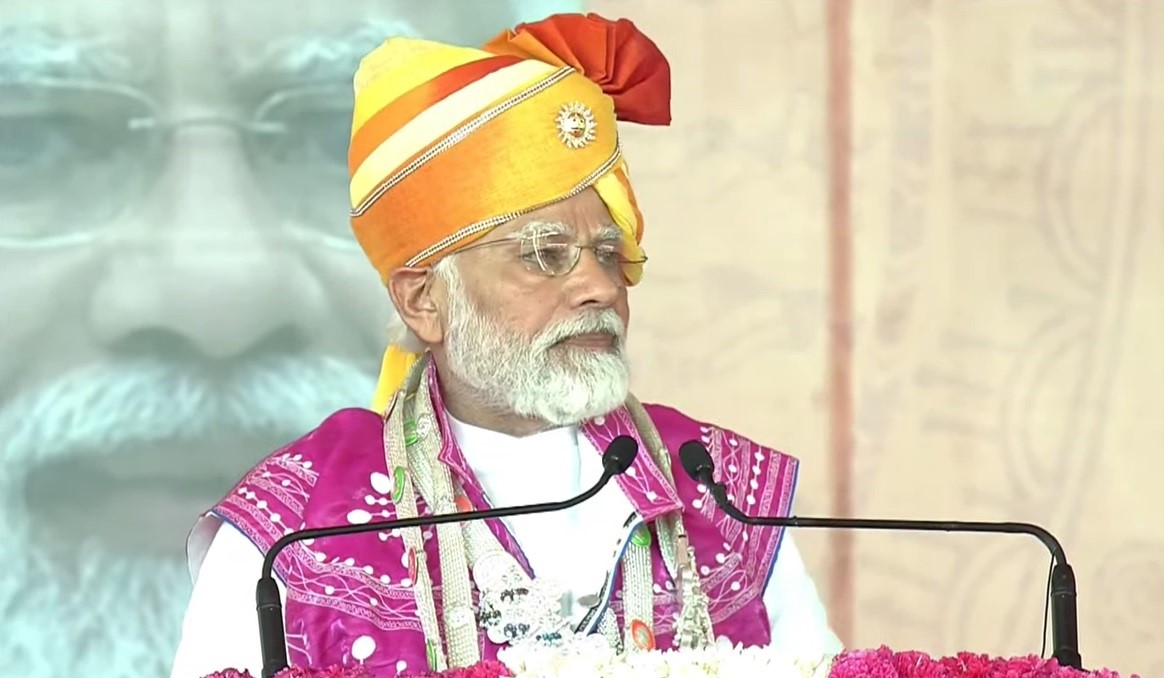 New Delhi: The Prime Minister, Narendra Modi attended the Adijati Maha Sammelan in Dahod today where he inaugurated and laid the foundation stone of various development projects worth around Rs 22,000 crore.

Prime Minister also laid the foundation stone for manufacturing of 9000 HP Electric Locomotives at the Production Unit in Dahod. The cost of the project is around Rs. 20,000 crore. Dahod workshop, established in 1926 for periodic overhaul of steam locomotives, will be upgraded to electric locomotive manufacturing unit with infrastructural improvements.

It will provide direct and indirect employment to over 10,000 people. Prime Minister also laid the foundation stone of various projects of the State government worth around Rs 550 crore. This includes water supply related projects worth about Rs. 300 crore, Dahod Smart City projects worth around Rs. 175 crores, works related to Dudhimati river project, GETCO Substation at Ghodia, among others. Union Ministers Shri Ashwini Vaishnaw, Smt Darshana Jardosh, Chief Minister of Gujarat Shri Bhupendrabhai Patel and many Ministers from the Gujarat Government were among those present on the occasion.

Speaking on the occasion, the Prime Minister, Shri Narendra Modi recalled his long association with the local tribal community and credited their blessings for inspiring him to undertake service of the nation. He also credited their support and blessing for a scenario where all the problems of tribal communities and specially those of women are being addressed by the double engine government at centre and the state.

Among the projects that have been inaugurated today, one is a scheme related to drinking water and the other is a project related to making Dahod a smart city, he said. This will bring ease of life for the mothers and daughters of the region. He said Dahod will contribute to Make in India campaign as Rs 20 thousand crore worth of 9000 HP Electric Locomotives is coming up at the Production Unit in Dahod. He recalled how the railway area of Dahod was dying when he used to visit the servant quarters in the area long ago.

He took pledge to revive the railway set up of the area and expressed happiness today when that dream is being realized. He said that this huge investment will provide new opportunities to the youth of area. Railway, he noted, is getting upgraded in all aspects and manufacturing of such advanced locomotive is indication of India’s prowess. “The demand for electric locomotives is increasing in foreign countries. Dahod will play a big role in meeting this demand. India is now one of the few countries in the world that makes powerful loco of 9 thousand horsepower”, he added.

Shifting to Gujarati, the Prime Minister said that we should ensure that in the journey of progress our mothers and daughters are not left behind. That is why, the Prime Minister said, women’s ease of life and empowerment is at the centre of all the schemes of the government. He gave example of water scarcity that affects the women first, that is why, the government is committed to provide tap water to every household. 6 crore households got the facility of tap water in last few years.

In Gujarat 5 lakh tribal families have received the facility of tap water. This campaign is being accelerated in the coming days. He said in the difficult period of the pandemic and wars, government ensured the welfare of vulnerable communities like ST, SCs, OBCs and migrant labourers. It was ensured that no poor family sleep hungry and free ration is being provided to more than 80 crore people for more than two years. He reiterated his pledge that every tribal household should have pucca house with toilet, gas connection, electricity, water connection.

In his village there should be health and wellness centre, education, ambulance and roads. To achieve this, central and state governments are working tirelessly. He expressed his immense happiness on seeing the beneficiaries venturing into projects of nation’s service such as natural farming. The government has also addressed the issue of sickle cell disease.

In the context of Azadi ka Amrit Mahotsav, the Prime Minister said that that many actual freedom fighter did not get their due recognition. He told about the recognition given to venerable fighters like Bhagwan Birsa Munda. He asked the local teachers to teach about the massacre in Dahod which was like Jallianwala Bagh massacre so that new generation knows about these incidents.

He also talked about the progress in the region as compared to days when there were not evena single science school. Now medical and nursing colleges are coming up, youth is going abroad for studies and Eklavya model schools are being established. Number of tribal research institutes have gone up significantly. He recalled how injection for snake bite is being provided under 108 facility.

In conclusion, he reiterated his request for 75 sarovars in the year of Azadi ka Amrit Mahotsav to be constructed in the district.