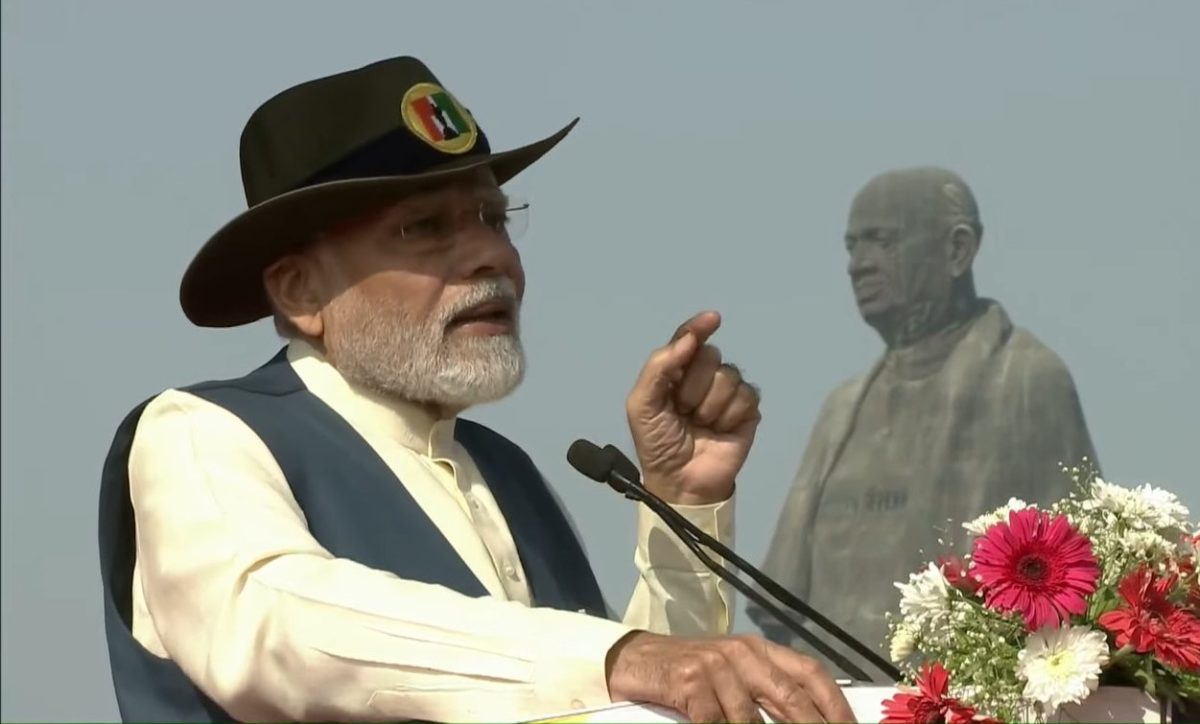 At the outset, the Prime Minister expressed his deep anguish for the victims of the mishap in Morbi yesterday. He said that even though he is in Kevadia, his heart remains connected to the victims of the mishap in Morbi. “On one hand, there is a heart laden with grief, while on the other there is the path of Karma and Kartavya, he said. He underlined that it is the path of duty and responsibility that has led him here at the Rashtriya Ekta Diwas.

The Prime Minister paid deep condolences to all those who lost their lives in yesterday’s mishap and assured that the government is standing shoulder to shoulder with the families of the victims. The state government has been engaging in rescue work and the central government is providing every possible assistance. The Prime Minister informed that NDRF teams have been deployed in rescue operations other than teams from the army and air force while assistance is also being provided to hospitals that are treating the injured.

He also noted that the Chief Minister of Gujarat reached the Morbi to take the lead in executing rescue operations and formed a committee to investigate the occurrences. The Prime Minister assured the people of the country that there will be no shortcomings when it comes to rescue operations. The cultural programme segment of the event was cancelled in light of the tragedy.

The Prime Minister underlined the significance of Ekta Diwas in 2022 as “it is the year when we completed 75 years of our Independence and we are moving ahead with new resolutions.” The Prime Minister said that unity is essential at every stage, be it family, society or nation.

This feeling is manifested, he said, all over the country in the form of 75,000 Ekta Runs everywhere. “Entire country is drawing inspiration from the resolute determination of Sardar Patel. Every citizen is taking a pledge for the unity of the country and to evoke ‘Panch Pran’”, he said.

This impossible task was completed by Sardar Patel”, he added. “Sardar Patel’s Jayanti and Ekta Diwas are not merely dates on the calendar for us, they are grand celebrations of India’s cultural strength. For India, Unity was never a compulsion, it was always a feature of our country. Unity has been our uniqueness”, the Prime Minister emphasised. He said in a calamity like the one that happened in Morbi yesterday, the entire country comes forward as one and people offer prayer and assistance from every part of the country. During the time of the pandemic, this unity was on full display in the emotional unison of ‘tali-thali’ to cooperation in medicine, ration and vaccine. T

he same emotions are witnessed during sporting successes, and festivals and when our borders are threatened and our soldiers protect them. All this, said the Prime Minister, symbolises the depth of India’s unity. This unity, he continued, was a thorn in the sides of invaders over the centuries and they tried to dilute it by sowing division, however, their designs were foiled by the nectar of unity that was a live stream in our consciousness.

He asked everyone to remain vigilant as powers envious of India’s growth and progress are still active and efforts are on to foment division on the basis of caste, region, language and history too is presented in a divisive way. He also warned against the slave mentality, selfishness, appeasement, nepotism, greed and corruption that can divide and weaken the country. “We have to counter the poison of divisiveness with the Amrit of Unity”, he added.

He stated that government policies are reaching every person in the country without any discrimination. Giving examples, the Prime Minister highlighted that free vaccines are made available to the people of Siang in Arunachal Pradesh as easily as the people in Surat, Gujarat. Medical institutions like AIIMS can now be found not just in Gorakhpur but also in Bilaspur, Darbhanga, Guwahati, Rajkot and other parts of the country as well.

He informed that the development work of defence corridors is in full swing not just in Tamil Nadu but also in Uttar Pradesh. The Prime Minister noted that even though different languages are spoken in different areas, the government schemes are reaching every part of India while connecting the last person in the queue.

Throwing light on how millions of people in our country waited for decades to avail basic needs, the Prime Minister said, “The smaller the gap between the infrastructure, the stronger the unity” He noted that India is working on the principle of saturation with the objective that the benefit of every scheme should reach every beneficiary.

The Prime Minister highlighted that the basic necessities of life are becoming a medium for the common man’s faith in the country and the Constitution and are also acting as a medium for the confidence of the common man. Remarking on this is the vision of Sardar Patel’s India, the Prime Minister said, “Every Indian will have equal opportunities, and there will be a sense of equality. Today the country is witnessing that vision come true.”

The Prime Minister urged the countrymen to know the history of Mangarh Dham and Jambughoda and said that freedom was achieved in the face of many massacres carried out by foreign invaders. He added, “Only then will we be able to understand the value of freedom and the value of solidarity.”

The Prime Minister remarked that Ekta Nagar is developing as a model city of India which will be unprecedented not only in the country but in the whole world. He underlined that it is the unity of the people and the city that is developing with the power of public participation while giving it not just a grand but a divine standpoint. “The inspiration for the world\’s largest statue in the form of the Statue of Unity is among us”, Shri Modi added.

Throwing light on the development model of Ekta Nagar, the Prime Minister said that city will be discussed when people will talk about an environment-friendly model, an electricity-saving model with LEDs illuminating the country, a model of clean transport system running on solar power, and a model of conservation of different species of animals and birds.

The Prime Minister recalled yesterday when he got the opportunity to inaugurate the Miyawaki Forest and Maze Garden here. He underlined that the Ekta Mall, Ekta Nursery, World Forest showing Unity in Diversity, Ekta Ferry, Ekta Railway Station and all these initiatives are an inspiration to strengthen national unity.

This contribution has been neglected for decades after independence. “Now a museum dedicated to the sacrifice of those royal families will be built in Ekta Nagar. This will pass on the tradition of sacrifice for the unity of the country to the new generations”, the Prime Minister concluded.