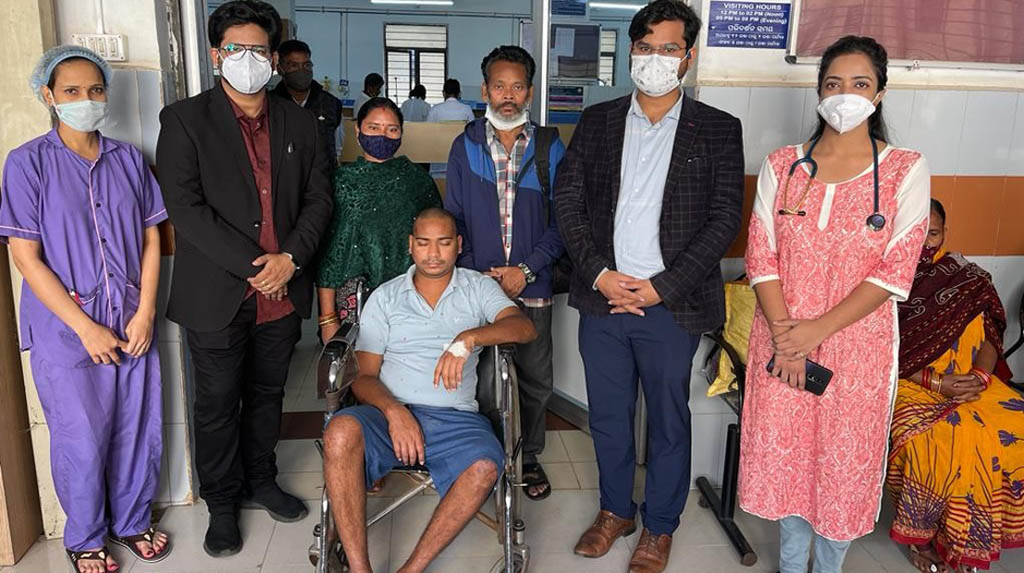 Bhubaneswar: In a rare case, claimed to be the first in India and seventh in the world, doctors at the Institute of Medical Sciences and SUM Hospital, faculty of medicine of Siksha ‘O’ Anusandhan (SOA) here, have successfully conducted an extremely complicated case of Brainstem Cavernoma and Myoclonic Epilepsy recently.

The patient, Anil Mahanandia (28) from Jharsuguda, who was suffering from the serious illness for the last 22 years, has recovered well after the surgery and discharged from the hospital on Friday.

This has added a new feather to IMS and SUM Hospital’s cap which has already become the first hospital in Odisha to conduct Bone Marrow transplantation and live donor liver transplantation.

“This is a rare disease and we have conducted this rare surgery on the patient successfully. If the surgery was not done, it could have led to brain haemorrhage,”

Prof. (Dr.) Ashok Kumar Mahapatra, Vice-Chancellor of SOA and eminent neurosurgeon, told newsmen. IMS and SUM Hospital, which has been registering footfalls of 3500 to 4000 patients daily, has been providing rare medical treatment to address a variety of rare ailments, he said adding patients who had lost all hope of a cure were getting their ailment treated successfully in this hospital.

Prof. (Dr.) Mahapatra said the patient was experiencing frequent hiccups and trembling besides abnormal body movements affecting his face, tongue, abdomen and thigh with the frequency of more than 30 per minute. He was unable to eat, sleep or stand. He could not get any relief after being treated in several hospitals within the state and outside.

When he came to IMS and SUM Hospital, the case was immediately diagnosed to be a case of Myoclonic Epilepsy by Senior Neurologist Dr. Surjyaprakash S. Choudhury and treatment was started. Further investigation revealed that Mahanandia had a tumour deep inside the brain (Brainstem Cavernoma) which was a rare condition and it required surgery which was too complicated and risky.

However, a team led by Neurosurgeon Dr. Atmaranjan Das conducted the seven hour long surgery on November 26 to successfully remove the tumour, he said.

According to research publications, this surgery was the seventh such case in the world and first in India. Surgery was not attempted anywhere in the country for addressing such cases before, Dr. Das said.
“It was a surgeon’s intuition that led me to take up the surgery. It was extremely challenging but our team was willing to take the risk,” he said adding “we opted for brain mapping—3D modeling technique used to visually represent nerve tracts using data collected by diffusion MRI and it worked.”

Just a day after surgery, the patient was absolutely free from hiccups and was able to walk which could be said to be a miracle in medical science. “He not only got a new life, but was able to eat and sleep properly. In fact, he walked out of the hospital when discharged,” Dr. Das said.

This has demonstrated that Odisha is not behind the rest of the world in taking up such difficult surgeries and IMS and SUM Hospital now matches international standards where all advanced equipment and technology is available, Dr. Choudhury said.

This case would now be published in various national and international medical journals. The expensive surgery was conducted free of any cost as the patient was covered under the state government’s Biju Swasthya Kalyan Yojana scheme. Dr. Srikanta Kumar Sahu, Head of the department of Neurology, was present at the press conference.