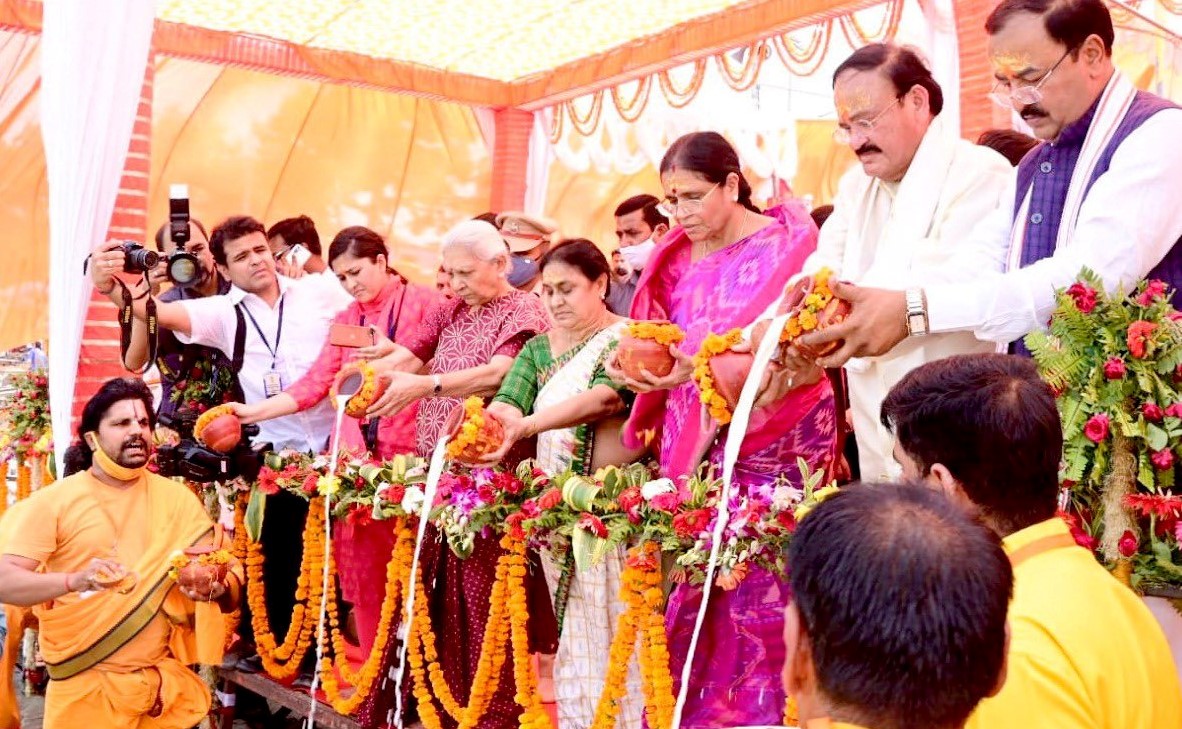 Shri Naidu who arrived in the city by a special train in the morning was welcomed by the Governor of Uttar Pradesh, Smt. Anandiben Patel, Deputy Chief Minister, Shri Keshav Prasad Maurya and other dignitaries at Ayodhya Railway Station.

Soon after, the Vice President and his wife visited Ram Janmabhoomi Sthal where the members of Ram Janmabhoomi Teerth Trust made a detailed presentation through a short film showcasing the 3-D model of the upcoming Ram temple . Subsequently, Shri Naidu performed puja at the Garbha Griha site of the under construction Ram Temple, and also offered prayers to the Ram Lalla. In the visitors book at Ram Janmabhoomi, he wrote –

“Blessed to have visited Ram Janmabhoomi today. Lord Rama is a symbol of our culture, our values and our glorious history. The life of Maryada Purushottam has always inspired the people of India and shown them the righteous path. The reconstruction of the grand Ram temple in Ayodhya is a moment of spiritual renaissance in India. I am sure that this Temple will continue to inspire the coming generations to respect our rich cultural heritage and show them the path of truth, justice and brotherhood.”

Later, Shri Naidu and his spouse offered prayers at the famous Hanuman Garhi temple in the city. It is believed that Lord Hanuman guarded the city of Ayodhya from this place after Shri Rama\’s return from Lanka.

The Vice President and his spouse, accompanied by other dignitaries, later proceeded to the holy Sarayu river and offered prayers to the ancient river which is closely associated with Lord Rama\’s life.

In the evening today, Shri Naidu and his spouse will also take part in Ganga Aarti in Varanasi.

On his return from Ayodhya, the Vice President wrote a facebook post sharing his deep emotional and spiritual experience at Ram Nagari.