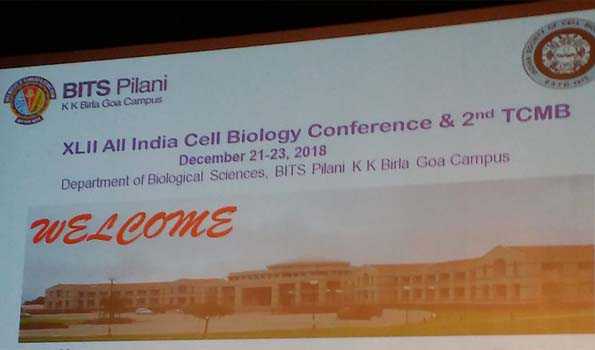 The prestigious conference, scheduled from December 21 to 23, 2018, is being held for the first time in Goa and is organised by Department of Biological Sciences of BITS Pilani Goa Campus.

The conference is attended by around 300 scientists and researchers from across the country. Around 50 lectures will be delivered by prominent scientists of different biological sciences field and almost 200 posters based on latest research will be presented across the three days.

This conference aims to provide opportunities and bring together acclaimed cell biologists, biochemists, molecular biologists and computational biologists to a common platform to present their exciting and new findings; also to establish research and to find global partners for future collaboration. The goal of this conference is to push the frontiers of cellular response to various stresses, cytotoxicity, molecular revolution in cancer management and approach to computational system biology. Cutting-edge technical developments and new paradigms in eukaryotic cells will be discussed with a view to fostering interactions between graduate students, post-doctoral fellows and established investigators across the world.

Cancer is still one of the most challenging diseases across the world and in this conference a special session is contributed to understand the upcoming development in this field, nationally and internationally. ‘Nanotechnology’ has also gained much importance in today’s treatment of some important diseases. In this conference the discussion will not only be related to how this technology is beneficial but also understand its drawbacks. ‘Toxicity’, which is one of the major health concerns, is whether due to an environmental stresses or due to unknowingly exposure to some toxic substances needs to be re-looked in depth. This conference will provide an opportunity for researchers across the globe to understand and showcase their data related to ‘Toxicity’. Immunology and computational and systems biology are other major areas which are evolving and need to be integrated with modern cell biology as a whole to understand and predict the things much better, the statement said. (UNI)