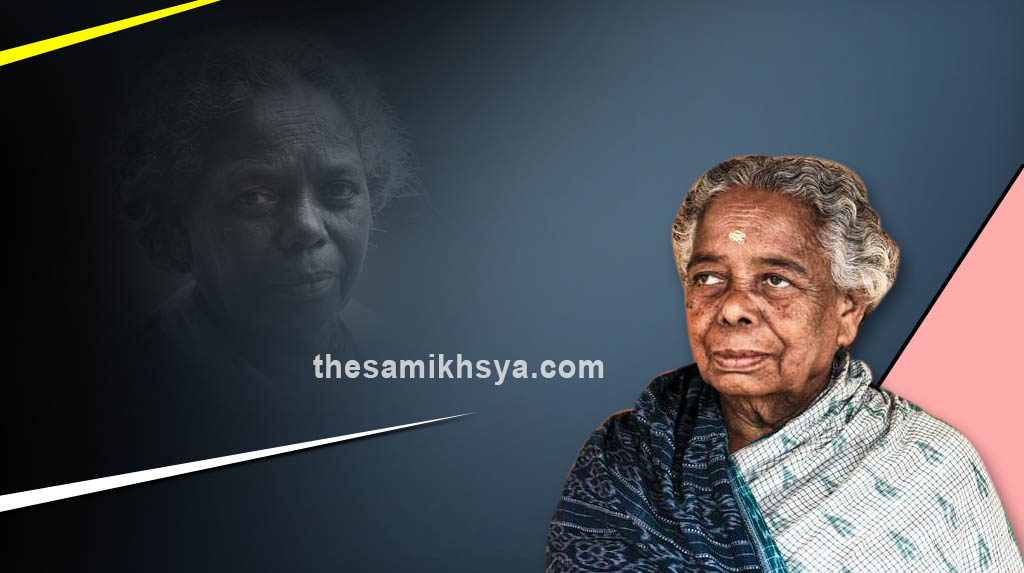 It was an arduous journey those days, negotiating the 70 kms long road ,undulated to the most by the freight carriers, to reach the place called Sarenda village in Keonjhar district of Odisha. It was summer and we were tightly enclosed inside an Ambassador car and blistering through, once looked bit too hard, if the purpose was not served.

Once there at Serenda, an elderly lady, clad with a khadi saree, was seen seated on a cot. She got up with her hands pressed on the knees, an usual prognosis of old age slowly dawning upon. She was Tulsi Munda, in her late sixties then.

A stoic exterior, made more poised by the black beady eyes, Tulsi asked us to come in. We were right inside the school or Ashram built by Munda in 1964, bit by bit, ultimately to become a place to reckon with for the substance it prides of.

A self-tutored lady, subsequently influenced by Vinoba Bhave, Tulsi had taken the headlong plunge into Bhoodan Andolan for some time, later to be back in Serenda, when Bhave advised her to go back and serve the downtrodden through spread of literacy .

A gigantic task that Tulsi found incomprehensible with no material handle to latch on to. But she did not give up.

Suddenly getting into that pressure-cooker bound sentiments of a social worker and turn to become a mother,  a teacher for hundreds of children, for whom education had never been in their dreams even, she felt herself, as if, ensnared by a situation with no escape from the moral boundaries.

She did not stop and kept moving impressively across that psychic terrain which was born out of maternal love, fear of one’s own conscience and of course, the fear of failures.

Tulsi started in low-key note. But what became difficult was the motivation part. To convince the people, mostly tribal, engaged in mining sector as daily wagers, to allow the children to join the school.

Whereas the normal practice is, the parents prefer their children to join them in work or stay at home.

Tulsi’s perseverance paid off and kids started trickling in slowly. It did take few years only when Tulsi’s compelling situations transformed and she became the mother for the   children of the area and ‘apaa’ (elder sister) for the locals who got inspired by her intensity of the vision.

For Tulsi the daunting track soon transformed into a love story and till date, now at 72, her zeal to serve got spiralled out of the local confines making her an epitome of motherhood.

She still remembers the days when she worked as a daily wager, often inflicted by fragmented urges to read, but  those  got blurred by circumstances.

Her grit and gumption led her through and today her school gets about 1000 to 1200 children enrolled where he gives   education up to class 10th in the Adivashi Vikas Samiti school with a monthly fee of only Rs.200.

Under her care, as of, there are over 2000 children once she opened a few more schools in the area, although smaller ones.

She was conferred with the Padma Shri award by government of India in 2001 for her efforts at spreading literacy.

Award may have come from a government but Tulsi stands out for not taking any financial assistance from any government . However, she doesn’t mind taking some financial help from few corporates.

She cannot fit into anything she is forced into nor can she submit before any official favours. Tulsi had once turned down the offer from the state government to head the State Commission for Women.

That way she is unyielding and as it appears, she has made herself what she is. A mother to many and a sister for an untold number .

A Samaritan of  Serenda,  Tulsi Munda,is  today has become a huge tree but it is difficult to think that, she has any saplings.

Her footfalls echo through the dense woods of Serenda . Tulsi is uncompromising as regards her place among the untold number of children and their parents.

She joyfully shares it that, she had no history and was just a child then who had dreams that now she loves to see being real through her children.

“Keeping children, mainly girls, away from education is like reducing them into insects encased , where they can never  grow and when out, they just creep to finish” that is Tulsi’s philosophy.