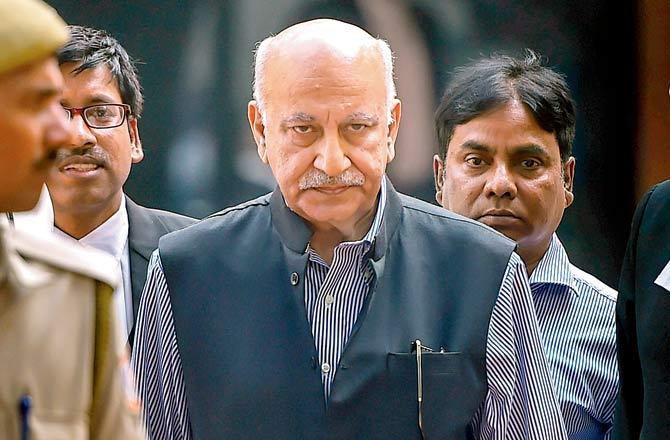 Facing allegations of sexual misconduct from ex-colleagues, journalist turned politician M.J. Akbar has resigned as the minister of state for external affairs. However, the allegations of he being a predator has yet to stop.

The latest allegations are from Pallavi Gogoi, who now works as the chief business editor of National Public Radio, a popular American media organisation based in Washington. Gogoi accuses Akbar of raping her when she worked in The Asian Age 23 years back. Akbar was the editor in chief of the paper.

Writing an opinion piece on November 1 titled, “As a young journalist in India, I was raped by M.J. Akbar. Here is my story,” Gogoi recounts her painful memories of working under Akbar and how he allegedly preyed on her.

Gogoi writes that she was just 22 when she joined The Asian Age, where the newsroom comprised mostly women. Akbar, who had made a great name for himself in the field of journalism after launching two successful publications – Sunday and The Telegraph – writing two highly appreciated political books, was sort of a star for Gogoi and others who had been barely out of college. They shuddered as he marked their copies with his “red-ink-filled Mont Blanc pen and shouted at them at the top of his voice. “I was mesmerised by his use of language, his turns of phrase, wishing that I could write like he did. So I took all the verbal abuse. After all, I was learning from the best. Or so I thought,” she writes.

Gogoi claims that she was first sexually assaulted by Akbar after she became the editor of the op-ed page of the paper at the age of 23. He allegedly tried to kiss her when she went to show him the page she had created. The second time she was assaulted few months later when he summoned her to Bombay (now Mumbai) to help him launch a magazine. Again, when he tried to kiss her in his hotel room, she pushed him away and ran out of the room, she says.

The next time, she writes, she was not lucky enough to get away. She had gone on an assignment to a remote village in Rajasthan. When she returned to her hotel in Jaipur, she found that Akbar too had come to the city. He called her to his room on the pretext of discussing the story and raped her, she alleged. Akbar allegedly kept sexually harassing her till she left The Asian Age.

Gogoi, who is now a US citizen says that she is writing her painful memories now to support other women who have come out with their stories of how they suffered due to Akbar. “I am writing this for my teenage daughter and son. So they know to fight back when anyone victimises them. So they know never to victimise anyone. So they know that 23 years after what happened to me, I have risen from those dark times, refusing to let them define me, and I will continue to move forward,” she writes.

Akbar and his wife Mallika Akbar refuted the allegations by Gogoi as false. Mallika, who reacted to allegations for the first time since #Metoo hit Akbar, termed Gogoi’s allegations to be a “lie”. Akbar also admitted that Gogoi and he were in a consensual relationship.

Mallika said in a statement: “I learnt of her (Gogoi) and my husband’s involvement through her calls and public display of affection in my presence. In her flaunting the relationship, she caused anguish and hurt to my entire family.”

Last month, Akbar resigned as Union minister after over a dozen of women accused him of sexually harassing and molesting them. But he is still a Rajya Sabha member of BJP. He has responded to all allegations saying that the incidents and allegations cited by the women are false and malicious. He has also filed a defamation suit against senior journalist Priya Ramani, who first accused of sexual misconduct.