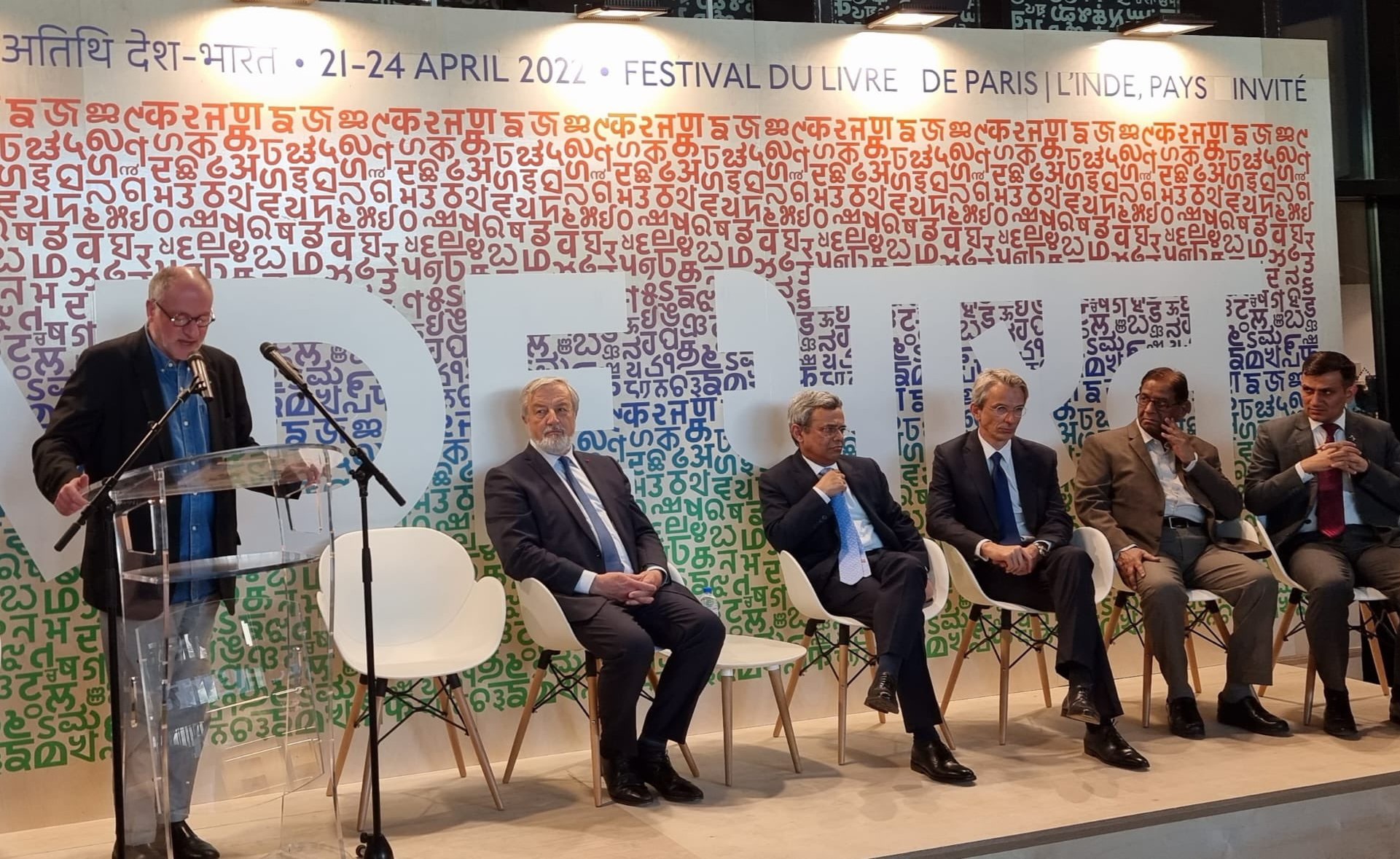 In the second session of the day, panellists Smt Sudha Murty, Shri E.N. Nandakumar, Shri Chamu Krishna Shastri, Mr Daniel Negers discussed the multi-lingual and multi-cultural dynamic that the Indian society offers to a writer. The session was moderated by Shri Sudeep Nagarkar.

Next session focused on Women Writers and their Creative Sphere in which Ms. Alka Saraogi, Ms. Kumud Sharma and Ms. Kathleen Scarboro talked about thecreative work being done by and issues concerning women writers.

The two epics, Ramayana and Mahabharata, are the two pillars of Indian civilisation and have always given the audience a new insight and understanding about human life. In the session on “Interpreting Indian Epics for the Contemporary Readers/Audience”, Shri Anand Neelakanthan, Shri Vikram Sampath and Acharya Balkrishnan discussed the various characters of these epics and their relevance today. Shri Jitendra Kumar Soni moderated the session.

Session on ‘Mahatma Gandhi and Romain Rolland: A 21st Century Perspective’ with two distinguished panellists Shri Vijay Singh and Ms. Christine Jordis who have spent their life in being cultural and literary bridges between India and France, took up some of the ideas exchanged between Gandhi and Rolland and how they impinge upon the contemporary reader. It was moderated by Shri Birad Yajnik, a noted Gandhi scholar and curator of Gandhi Museums in India and abroad.

The next session was a brief presentation on the theme ‘Indian Influences on Art and Architecture of Europe’ by Ms Nupur Tron, art conservator and promoter based in Brussels, followed by an interaction with Ms Tanishka Kachru, art historian and Senior Faculty of NID, Ahmedabad. It was moderated by Shri Jonak Das, Senior Faculty, Exhibition Designs, NID.

The day ended with two cultural programmes, namely, ‘Ethereal to Eternal’ a Mohiniattam performance by Ms. Brigitte Chatiginer; and From the Pages of Naatyashastra a Bharatnatyam solo by Ms. Mallika Thalak.

In the second session of the day, panellists Shri Devendra Mewari, Ms Priyanka Agarwal Mehta, Shri Birad Yajnik discussed climate change and how it has been addressed by contemporary writers in their books. The session was moderated by Shri Jitendra Kumar Soni.

Celebrating 75 glorious years of India’s Independence, the next session [email protected] and Vision of New India talked about the achievements of India as a modern independent nation, and the vision of New India. The tone of the session was set by the Key-Note by the Hon\’ble Ambassador of India Shri Jawed Ashraf. Tradition of debate, pluralism and diversity in views, thought and speech has been the defining principle of Indian ethos and our democratic values. India remains resilient and stronger, he said. The session was chaired by Prof. Govind Prasad Sharma, Chairman, NBT.

Next was a conversation between Acharya Balkrishna and Shri Chamu Krishna Shastri where they discussed the opulence, practicality and accessibility of Sanskrit and its role in modern times. It was followed by a panel discussion on India’s Linguistic Traditions with panellists Shri Rajesh Vyas, Shri Sudeep Nagarkar, Shri E.N. Nandkumar and Shri Gourahari Das.

In context of NEP 2020 and on occasion of World Book & Copyright Day, a discussion on Internationalisation of Education and Role of Books was held in which Shri Yuvraj Malik, Director NBT withProf. Govind Prasad Sharma, Chairman NBT talked about possibilities of an international curriculum to train students and young readers as true global citizens to reach their optimal potential and the role of books in achieving this goal. Ms Shreerupa Mitra delivered the Key-Note address.

Launch of the Book Chandarnagor: A Burg of the Moon written and Illustrated by Suddhasatwa Basu followed by a discussion on Legacy of French Culture in India with panellists Shri Yuvraj Malik, Director NBT, Shri Suddhasattwa Basu, Shri Anand Neelakanthan, and Ms Laurent Goldstein. The session was moderated By Shri Kumar Vikram.

The day ended with three cultural programmes, namely, ‘The Temple footsteps’, an Odissi dance performance by Ms Mahina Khanum; \’Once Upon a Time,’ a Puppet show by Ms Sabrina Arusam; and a Bharatnatyam classical dance concert.

Day 3 began with a Kathak dance performance by Ms Sharmila Sharma. It was followed by a session on Sri Aurobindo and his philosophy in contemporary times with panellists Shri Anand Neelakanthan, Shri Kiran Vyas and Mr Olivier Pironneau. The session was moderated by Shri Vikram Sampath.

In a discussion on ‘Rivers as Carriers of Cultures’,panellists Acharya Balkrishnan and Mr Olivier Germain Thomas discussed the role of Ganga as an important agent of culture.

A session revolving around the importance of writing on, and about history, ‘Past is Always Present’ wasorganised with Shri Vikram Sampath, Shri Siddhartha Shankar Gautam and Mr Douglas Gressieux, moderated by Shri Binay Kumar Singh.

The India Pavilion which has been designed by National Institute of Design, Ahmedabad (NID), the Design Partners of NBT-India for the event, is representing the works of 65 Indian publishers with more than 15 digital and physical exhibitions displaying over 400 books published in various Indian languages.

The Physical Exhibitions at the India Pavilion included Collective Exhibit of Books from India, Exhibit of Indian Children’s Books Translated into French, Exhibition of Books under [email protected] Series, National Heroes of India: A Representative Exhibition, Exhibit of Books of Authors visiting as part of the official India Delegation, Exhibit of UNESCO Documents on India, Exhibition of Special Edition of ‘Chandernagor: A Burg of the Moon’ Written and Illustrated by Suddhasattwa Basu on French Legacy in India, Digital Exhibitions on the Sidelines, Gandhi and Rolland: Exchanging Letters and Ideas, Reading Spaces in India: A Representative Chronology, This Earth of Ours: Looking at Biodiversity, Environment and Climate Change in Children’s Literature in India, PM-YUVA Mentorship Scheme for Young Authors, National Education Policy 2020, and Snippets from French Books on Indian Art, Culture, Painting, Literature, etc.