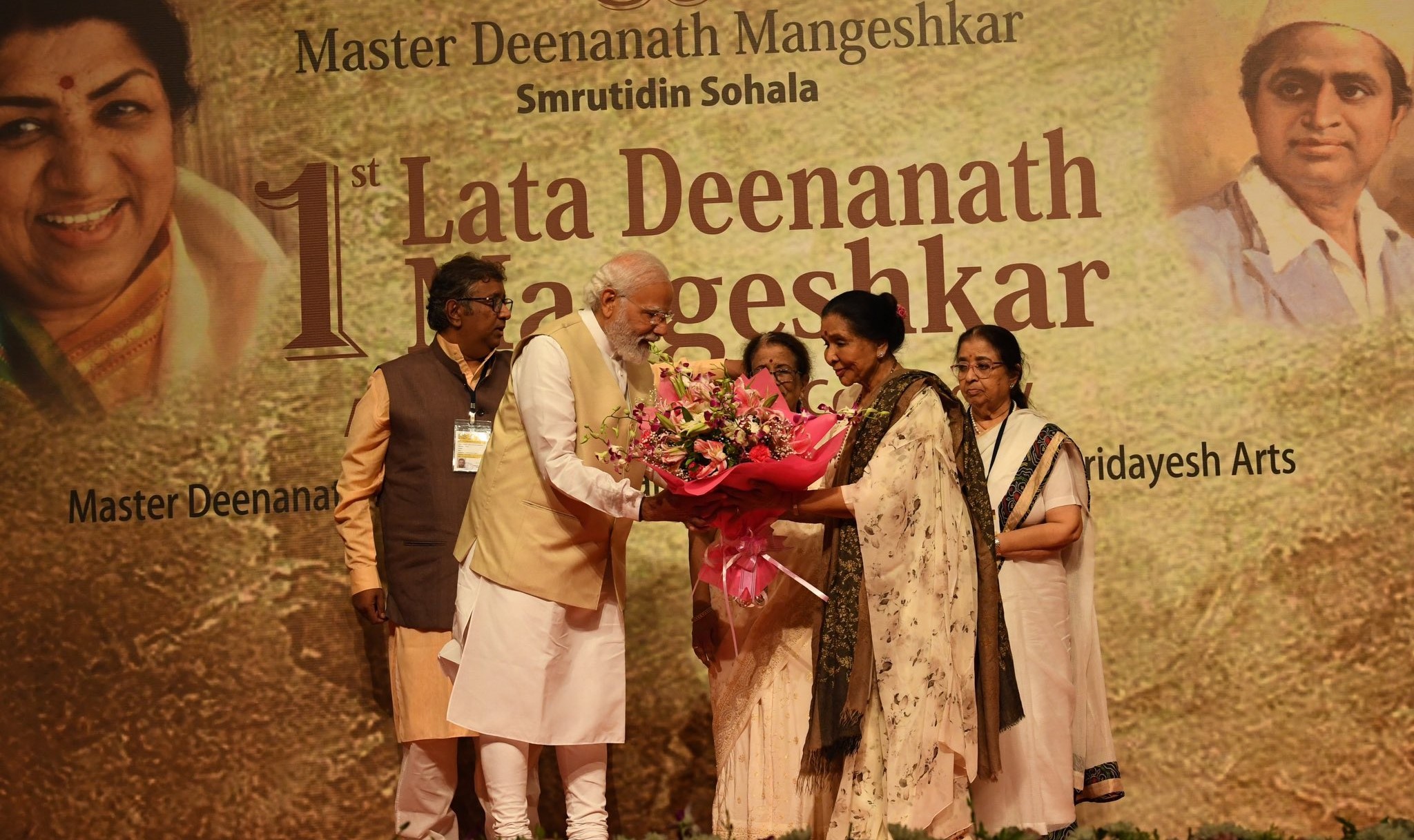 Mumbai: The Prime Minister, Shri Narendra Modi attended the Master Deenanath Mangeshkar Awards Ceremony in Mumbai today. On this occasion, Prime Minister was conferred 1st Lata Deenanath Mangeshkar Award. This award, which has been instituted in memory of Bharat Ratna Lata Mangeshkar, will be given every year exclusively to one individual for exemplary contribution towards nation building. Governor of Maharashtra Shri Bhagat Singh Koshyari, Members of Mangeshkar Family were among those present on the occasion.

The Prime Minister started by saying that though he does not have too deep a knowledge of music but by cultural appreciation, it is felt that sangeet is both a ‘sadhna’ and an emotion. He continued and said “the one that expresses the unexpressed is word. One that fills the expressed with energy and consciousness is ‘naad’. And the one that fills conscious with emotions and feelings and takes it to the extreme of creation and sensitivity is ‘sangeet’. Music can fill you with valour, motherly affection. It can take one to the pinnacle of patriotism and sense of duty. “We are fortunate to have seen this capability and strength of music, in the form of Lata Didi”, he said. On a personal note, Shri Modi said “For me, Lata Didi was the ‘Sur Samragyi’ as well as my elder sister. What can be a greater privilege than to have received the love of a sister from Lata Didi, who has given the gift of love and emotion to generations”, he said.

Prime Minister said that he is generally not very comfortable with receiving awards but when the Mangeshkar Family calls with an award that carries the name of an elder sister like Lata Didi, then it becomes a symbol of her affection and love. “It is not simply possible for me to say no to this. I dedicate this award to all the countrymen. As Lata Didi belonged to people, this award given to me in her name also belongs to people”, the Prime Minister said. The Prime Minister narrated many personal anecdotes and elaborated upon the immense contribution of Lata Didi to the cultural world. “Lata ji\’s physical journey was completed at a time when our country is celebrating Amrit Mahotsav of its freedom. She gave voice to India before independence, and the country\’s journey of these 75 years was also associated with her voice”, said the Prime Minister.

The Prime Minister talked about the strand of patriotism in the Mangeshkar family. He said “Along with the song, the consciousness of patriotism that was within Lata Didi, her father was the source of it’. Shri Modi narrated the incident when a song written by Veer Savarkar was sung by Dinanath ji in a program of the British Viceroy in Shimla during the freedom struggle. The song was written by Veer Savarkar challenging the British rule. This feeling of patriotism was given in inheritance to his family by Deenanath ji, said the Prime Minister. Lata ji made music her worship but patriotism and national service also got inspiration through her songs.

Referring to the illustrious career of Lata Didi, the Prime Minister said “Lata ji was like a melodious manifestation of ‘Ek Bharat Shreshth Bharat’. She sang thousands of songs in more than 30 languages. Whether it was Hindi, Marathi, Sanskrit or other Indian language, her sur was equally at home everywhere”. Shri Modi continued “From culture to faith, from east to west, from north to south, Lata ji\’s notes worked to unite the whole country. Globally too, she was India\’s cultural ambassador.” She is ingrained in the minds of people in every state, in every region. She showed how music can be immortal with Indianness, said the Prime Minister. Prime Minister also touched upon the philanthropic works of the family.

The Prime Minister said for India, development means Sabka Saath, Sabka Vikas , Sabka Vishwas and Sabka Prayas. This project also encompasses the philosophy of ‘Vasudhaiv Kutumbakam’ welfare of all. The Prime Minister explained that such a notion of development cannot be achieved by just material capabilities. For this spiritual consciousness is critically important. That is why, India is providing leadership in areas like yoga, Ayurveda and environment. “I believe, our Indian music is also an important part of this contribution of India. Let us keep this heritage alive with the same values and carry it forward, and make it a medium of world peace”, concluded the Prime Minister.