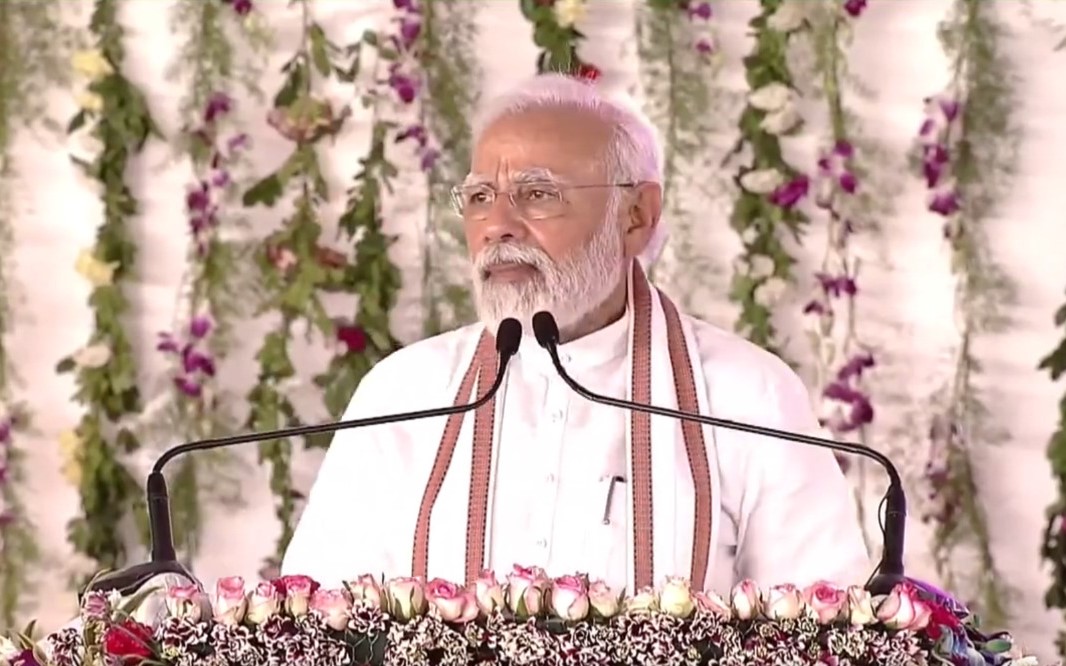 New Delhi: The Prime Minister Narendra Modi visited Palli Gram Panchayat under Samba District in Jammu and Kashmir to participate in the celebration of National Panchayati Raj Day today and addressed all the Gram Sabhas across the country, from there. The Prime Minister inaugurated and laid the foundation stone of multiple development initiatives worth around Rs 20,000 crore. He also launched the Amrit Sarovar initiative. Lt Governor Jammu and Kashmir Shri Manoj Sinha, Union Ministers Shri Giriraj Singh, Dr. Jitendra Singh and Shri Kapil Moreshwar Patil were among those present on the occasion.

The Prime Minister handed over SVAMITVA cards to beneficiaries. He also transferred award money of Rs.44.70 crore to Panchayats which are winners of National Panchayat Awards given across different categories on National Panchayati Raj Day for their achievements. Prior to reaching the dais, the Prime Minister interacted with Sarpanch and Panch(s) of Palli Gram Panchayat under Samba District in Jammu and Kashmir where Panchayat Report was presented by Shri Randhir Sharma, Sarpanch of Palli Gram Panchayat. The Prime Minister visited different thematic stalls at the Exhibition Ground. The Prime Minister also visited the INTACH photo gallery which depicts the rural heritage of the region, and Nokia Smartpur, a rural entrepreneurship-based model designed to create ideal smart villages in India.

Speaking on the occasion, the Prime Minister said that today is a landmark day in the development journey of Jammu and Kashmir. He thanked the people of Jammu and Kashmir for their enthusiasm. The Prime Minister said, due to his long association with the State, he understands the issues involved and expressed happiness about the focus on connectivity in the projects inaugurated and for which foundation stone was laid today.

“Projects worth 20 thousand crore rupees related to connectivity and electricity have been inaugurated and the foundation stone has been laid here. To give a new impetus to the development of Jammu and Kashmir, work is going on at a fast pace. These efforts will provide employment to a large number of youths of Jammu and Kashmir”, he said. Today many families have also got property cards of their houses in villages. These ownership cards will inspire new possibilities in the villages.100 Jan Aushadhi Kendras will become a medium to provide affordable medicines and surgical items to the poor and middle class families of Jammu and Kashmir, he said.

He said all houses of Palli Gram Panchayat getting solar power is a perfect example of Gram Urja Swaraj and the changed way of working will take Jammu and Kashmir to new heights. Shri Modi referred to India’s leadership on international environmental and climate change platforms and expressed pride in the strides that Palli Gram Panchayat is making towards becoming first carbon neutral Panchayat. “Palli Gram Panchayat is moving towards becoming the first Carbon Neutral Panchayat in the country. Today, I have also got an opportunity to interact with the people’s representatives of the villages of the country, in the village of Palli. Many congratulations to Jammu and Kashmir for this big achievement and development works”, he said.

Referring to his vision of ‘Ek Bharat Shresht Bharat’, the Prime Minister explained that the vision focuses on connectivity and elimination of distances. “Distances, whether of hearts, languages, customs or of resources, their elimination is our very big priority today”, he added.

The Prime Minister dwelled on the role of Panchayats in the development of the country and said “This ‘Amrit Kaal’ of Independence is going to be the golden period of India. This resolve is going to be realized by Sabka Prayas. In this, the role of the Gram Panchayat, the most grassroots unit of democracy and all of you colleagues is very important”, he said. It is the effort of the government, he stressed, that the role of Panchayat should deepen in planning and implementation of every project related to the development of the village. “With this, Panchayat will emerge as an important link in the achievement of national resolutions”, he added.

With a view to ensure rejuvenation of water bodies, the Prime Minister also launched a new initiative named Amrit Sarovar. It is aimed at developing and rejuvenating 75 water bodies in each district of the country as a part of celebration of Azadi ka Amrit Mahotsav. The Prime Minister said that 75 Sarovars will come up in every district by 15 August in 2023. He urged that these Sarovars should be lined with trees named after the martyrs and freedom fighters.

Shri Modi also elaborated upon the push for transparency and empowerment of Gram Panchayats. Measures like e-Gram Swaraj are linking processes from planning to payment. Panchayats will be audited online and a system of citizen charter for all the Gram Sabha is encouraging the Sabhas for taking up many roles. He also highlighted the role of women in these institutions and village governance especially water governance.

Reiterating his push for natural farming the Prime Minister said that it is critical to free mother earth of chemicals as it is harming the land and groundwater. He said if our villages move towards natural farming that will benefit entire humanity. He asked to explore how natural farming can be promoted at the level of Gram Panchayats, for these collective efforts are needed. Similarly, Gram Panchayats will play a major role in combating malnutrition with the help of ‘Sabka Prayas’. “People on the ground have to be made aware about the initiative taken by the central government to save the country from malnutrition and anaemia. Now the rice being given under the government schemes is being fortified”, he informed.

Since the introduction of constitutional reforms with regards to J&K in August 2019, the government has been focussed on bringing about wide ranging reforms to substantially improve governance and enhance ease of living for the people of the region at an unprecedented pace. The projects inaugurated and whose foundation stone was laid will go a long way in facilitating provision of basic amenities, ensuring ease of mobility and development of infrastructure in the region.

Prime Minister inaugurated the Banihal Qazigund Road Tunnel, built at a cost of over Rs 3100 crore. The 8.45 Km long tunnel would reduce the road distance between Banihal and Qazigund by 16 km, and reduce journey time by around one and a half hour. It is a twin tube tunnel – one for each direction of travel – with the twin tubes being interconnected by a cross passage every 500m, for maintenance and emergency evacuation. The tunnel would help establish an all-weather connection between Jammu and Kashmir, and bring the two regions closer.

Prime Minister laid the foundation stone of three road packages of Delhi-Amritsar-Katra Expressway, being built at a cost of over Rs. 7500 crore. They are for the construction of 4/6 lane access controlled Delhi-Katra-Amritsar Expressway from: Balsua on NH-44 to GurhaBaildaran, Hiranagar; GurhaBaildaran, Hiranagar to Jakh, Vijaypur; and Jakh, Vijaypur to Kunjwani, Jammu with spur connectivity to Jammu Airport.

In order to further expand the network of Jan Aushadi Kendras in J&K and to make good quality generic medicines at affordable prices available, 100 Kendras have been made functional and dedicated to the nation by the Prime Minister. These Kendras are located in the remote corners of the UT. He will also inaugurate a 500 KW solar power plant at Palli, which will make it the country’s first Panchayat to become carbon neutral.

Addressing the Panchayats and Gram Sabha from Palli Gram Panchayat in Jammu and Kashmir, Union Minister of Rural Development and Panchayati Raj, Shri Giriraj Singh called upon the Panchayats to ensure public welfare through empowerment, public participation, transparency and use of technology, and reiterated the resolve that together we will make it a reality.

Regarding boosting the economic activity in rural areas and efforts being made towards making women self-reliant, the Union Minister of Rural Development and Panchayati Raj said that the target of Mission 1 lakh has been set by connecting 10 crore women with Self-Help Groups and economic activities are being accelerated through schemes like SVAMITVA and Digital India Land Records Modernization Program (DILRMP). India’s economy can be made stronger by making villages capable and self-reliant.

Emphasizing on the need to prepare Master Plan of Panchayats like Town Planning to make Vibrant Panchayats, Union Minister of Panchayati Raj, Shri Giriraj Singh suggested the development process like Social Infrastructure, Economic Activity, Road and Transport Network etc. will get a new direction through Revised RADPFI Guidelines. He called upon the Panchayats to develop the concept of holistic and inclusive development and ensure public participation in the development process. Public participation has enhanced the quality of Panchayat Development Plan formulation and the significance of People\’s Plan campaign is evident in different parts of the country.

In his address, Shri Giriraj Singh requested the States and Union Territories to utilise the forum of Gram Sabha, use of e-Gram Swaraj application and training and capacity building of Panchayat representatives and functionaries through Rashtriya Gram Swaraj Abhiyan to ensuring efficiency, accountability and transparency in functioning of Panchayats and facilitating Ease of Living in rural areas.

Underlining the need of green energy in rural areas, Union Panchayati Raj Minister Shri Giriraj Singh said that Panchayats have an important role in fulfilling the Prime Minister’s dream of 500 GW (giga watt) renewable energy (RE) capacity by 2030 and for this suggested to move forward in the direction of Gram Urja Swaraj Abhiyan.

Regarding the positive change in rural India after the implementation of SVAMITVA Scheme, Union Minister of Panchayati Raj Shri Giriraj Singh said that drone survey has been done in about 1.3 lakh villages and 15 lakh parcels have been digitised. Expressing commitment to realize Prime Minister Shri Narendra Modi’s statement ‘Leaving No Citizen Behind’, Shri Giriraj Singh said that we want to create a rural India in which facilities like cities are available and people do not move to cities for jobs and there will be widespread prosperity and equal opportunities for everyone.

Shri Manoj Sinha, Lt. Governor and Shri (Dr.) Jitendra Singh, Union Minister of State (I/c) also spoke on the occasion and put forth their views, insights and future roadmap with regard to progress and prosperity in Jammu and Kashmir. Both the dignitaries congratulated the Panchayat representatives and functionaries on the occasion of National Panchaati Raj Day.

Special Gram Sabhas were organised across the country to celebrate National Panchayati Raj Day and special arrangements were made for watching the live telecast / webcast of the Prime Minister’s address to Gram Sabhas and Panchayats across the country. Award Distribution Ceremonies were also organised at State and District Headquarters level to felicitate and confer the National Panchayat Awards to the concerned awardee Panchayats.