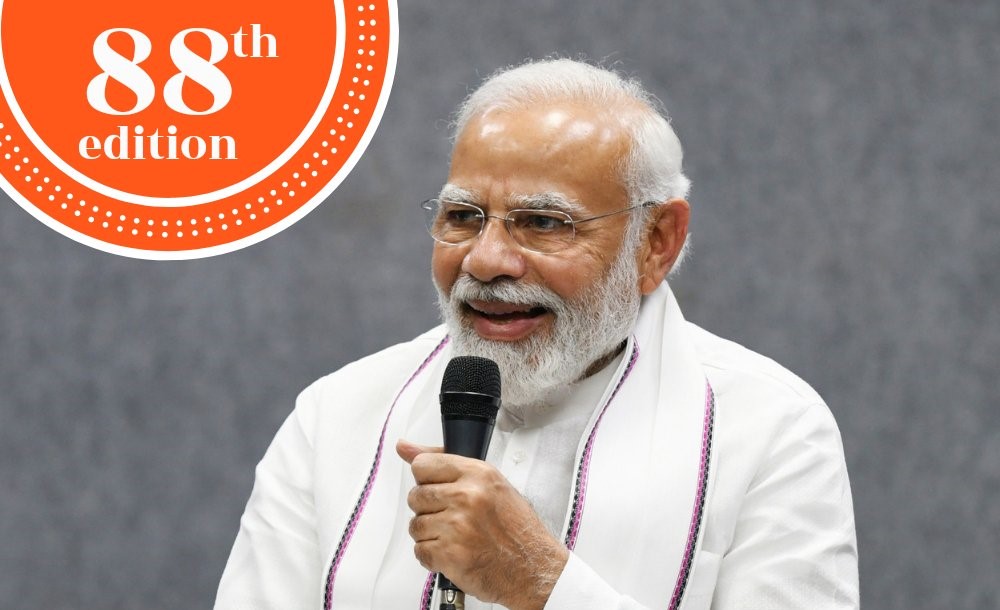 New Delhi: Prime Minister Narendra Modi today expressed satisfaction that the culture of digital payments is growing in India. Addressing the nation in his Mann Ki Baat programme on All India Radio, Modi said UPI has rapidly become part of the country’s economy as people are transacting through UPI even in remote villages and small towns. He stated that digital transactions worth 20 thousand crore rupees are being done in the country every day. In March, UPI transactions reached around 10 lakh crore rupees.

The Prime Minister pointed out that many new start-ups related to Fin-tech are also coming up in the country. Modi gave the example of Sagarika and Preksha, who experimented with Cashless Day Out in Delhi. Both of them used digital payments for their expenses for the entire day. He said the girls were able to pay via online transactions even at roadside stalls. He also mentioned Anandita Tripathi from Ghaziabad who wrote to him saying that she journeyed across Northeast and was able to avail the benefit of digital transactions even in remote areas.

The Prime Minister stated that technology is changing the lives of ordinary people. He said that technology has made lives easier for Divyang people and enabled them to reach new heights. He said the government is constantly making efforts to make resources and infrastructure accessible to the differently-abled. Mr Modi said there are many start-ups and organizations which are doing inspirational work in this direction. He mentioned one such organization – Voice of Specially Abled People, which is promoting new opportunities in the field of assistive technology. Voice of Specially Abled People has prepared a digital art gallery of paintings of Divyang artists.

Touching the topic of water conservation, the Prime Minister said the country is moving forward with the resolve to conserve water in the Azadi Ka Amrit Mahotsav. During the Amrit Mahotsav, 75 Amrit Sarovars will be built in every district of the country. He praised Gram Panchayat Patwai of Rampur in Uttar Pradesh where local people have helped transform a dirty pond.

Mr Modi said availability or scarcity of water determine the progress and speed of any country. He quoted from the scriptures and said water is the basis of life of every living being and water is also the biggest resource. He added that saving water and building ponds have been termed as social and spiritual duty in the Vedas and Puranas. In Valmiki Ramayana, special emphasis has been laid on water conservation, and connecting water sources. Mr Modi said that even during the Indus-Saraswati and Harappan civilizations, an interconnected system of water sources existed.

Prime Minister Modi cited the example, of Maldhari, tribe of Rann of Kutch who use a method called Vridas for water conservation. Under this, small wells are built and trees are planted nearby to protect it. Similarly, he said, the Bhil tribe of Madhya Pradesh use their tradition – Halma for water conservation. Under this, the people gather at one place to find solutions to the problems related to water. Mr Modi asked people to pledge to conserve water in the Azadi Ka Amrit Mahotsav.

The Prime Minister said the country’s new Pradhanmantri Sangrahalaya has generated a lot of curiosity among the people. The Pradhanmantri Sangrahalaya was dedicated to the nation on the 14th of April, the birth anniversary of Babasaheb Ambedkar. He mentioned Sarthak from Gurugram who wrote to him saying that he came across many new and previously unknown facts about the lives of leaders like Lal Bahadur Shastri and Morarji Desai in the Museum. Mr Modi said there can be no better time to remember the contribution of the Prime Ministers of the country than the Azadi ka Amrit Mahotsav. He exuded pride that the Azadi Ka Amrit Mahotsav is taking the form of a mass movement.

The Prime Minister also quizzed listeners on their general knowledge regarding the country’s museums. He asked listeners to share the answers on NaMo App or social media with #MuseumQuiz. He expressed happiness that many people are coming forward and donating to the museums.

Many people are donating their old collections, as well as historical artefacts, to museums. Mr Modi appreciated all such individual efforts. International Museum Day will be celebrated all over the world on 18th May. The Prime Minister urged people to visit a local museum and share their experience with #MuseumMemories.

The Prime Minister also discussed mathematics in this edition of Mann Ki Baat. He said people of India have given the most research and contribution in the field of mathematics. He gave the example of the discovery of zero and its importance. From Calculus to Computers – all scientific inventions are based on Zero.

Modi stressed that every principle of science is expressed through a mathematical formula, be it Newton’s laws, or Einstein’s famous equation. He said that scientists are now discussing the Theory of Everything whereas Indian sages have always imagined such an expansion of scientific understanding with the help of mathematics.

Modi said the CEO of Intel company had given him a painting recently where an Indian method of calculation or measurement was depicted through Vamana avatar. Modi added that sages like Acharya Pingala postulated the binary system and mathematicians like Aryabhatta and Ramanujan worked on principles of mathematics.

Modi assuaged students who find Maths a tough subject, saying Mathematics has never been a difficult subject for Indians. He said a big reason for this is Vedic Mathematics. He said the credit of Vedic mathematics in modern times goes to Bharati Krishna Tirtha Maharaj who revived the ancient methods of calculation and named it Vedic Mathematics.

The Prime Minister spoke to Gaurav Tekriwal of Kolkata who has been taking the Vedic Mathematics movement forward in the last two-and-a-half decades. Mr Gaurav explained how Vedic maths can transform mathematics from complex to fun. Modi urged all parents to teach Vedic maths to their children.

The Prime Minister greeted people in advance for Eid, Akshaya Tritiya, birth anniversary of Bhagwan Parashuram and Vaishakh Budh Purnima. He said all these festivals lay stress on restraint, purity, charity and harmony. He urged people to follow all the COVID protocols like wearing masks and washing hands.