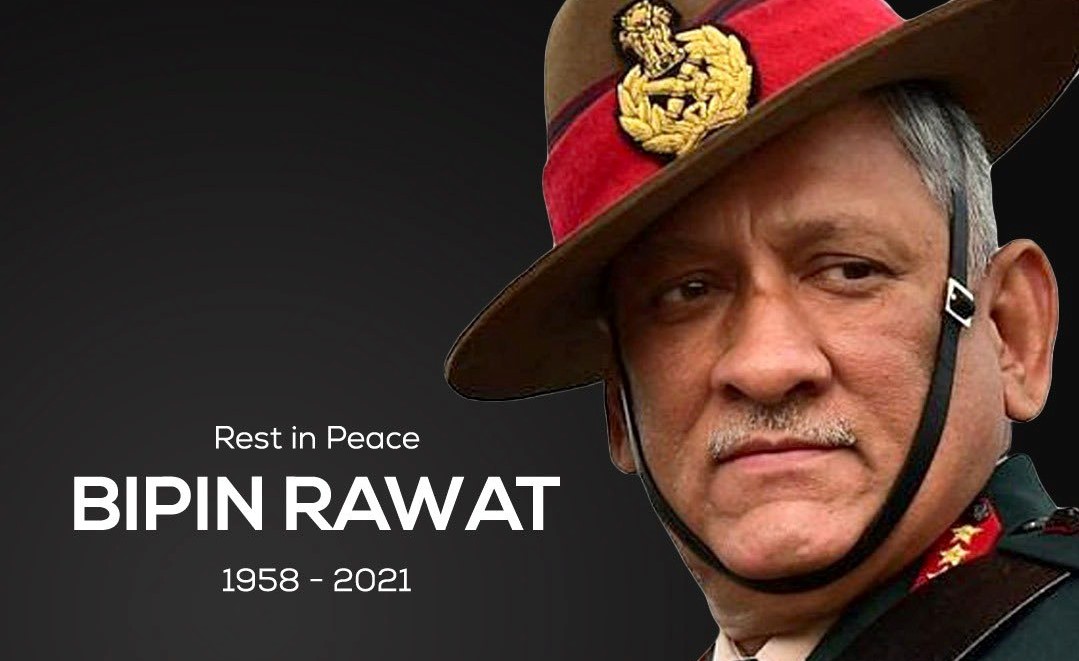 New Delhi: Condolences poured in from across the world over the untimely death of General Bipin Rawat, his wife and 11 others in a helicopter crash in Tamil Nadu.

Sri Lankan Prime Minister Mahinda Rajapaksa said he was shocked and saddened to hear the tragic news of the untimely death of CDS General Rawat and the others.

Bhutan Prime Minister Lotay Tshering said, heartaching to learn of helicopter crash in India, claiming 13 precious lives, including the Chief of Defense Staff Gen Bipin Rawat and his wife. People of Bhutan and he offer prayers for India and the bereaved families and may you find strength to see through the tragedy, the Bhutanese Prime Minister added.

President of Maldives Ibrahim Mohamed Solih said, saddened to hear of the tragic passing of India’s Chief of Defense Staff General Rawat. Expressing condolences to his family and the Indian nation for their loss, the President of Maldives said, he had the honor of meeting him in 2019, a true soldier who put service to his nation above all else.

Israeli Defence Minister Benny Gantz said, he would like to extend condolences on behalf of Israel’s defence establishment and to express his personal grief to the people of India and to the Indian defence establishment on the loss of Chief of Defence Staff Bipin Rawat, his wife and others.

The Taiwan Foreign Ministry also extended the heartfelt condolences over the tragic incident.

Expressing deep condolences on the untimely demise of General Rawat, Russian Ambassador Nikolay Kudashev said Gen. Rawat was a true friend of Russia and he chose Russia as the first country to visit as CDS. Taking to Twitter, the Russian envoy, said General Rawat played a big role in the promotion of India and Russia bilateral special and privileged strategic partnership. India has lost its great patriot and dedicated hero, Kudashev added.

British high commissioner Alex W Ellis said General Rawat was a wise man, a brave soldier and a pioneer. We mourn his death and that of his wife, and all killed in this terrible accident, Ellis tweeted.

Japan’s ambassador to India Satoshi Suzuki has expressed condolences over the demise of General Rawat. Expressing grief over the tragic incident, Satoshi Suzuki said,  he extends his deepest condolences to the bereaved family members of the people killed in the accident.

Polish ambassador to India, Adam Burakowski has also extended his deepest condolences on the demise of Gen Rawat, his wife and to the families of those who died in the tragic crash.

The French ambassador in India Emmanuel Lenain also expressed his condolences. The Australian High Commissioner Barry O’ Farrell tweeted that he was deeply saddened to hear the terrible news of the helicopter accident.

German ambassador to India Walter J. Lindner said, what tragic news! Our deepest condolences to General Rawat’s family and all relatives of those who perished in the tragic helicopter crash.

The Chinese ambassador to India Sun Weidong also expressed his condolences. The Singapore mission in India said Gen.Rawat’s vision, candour and warmth will be missed.