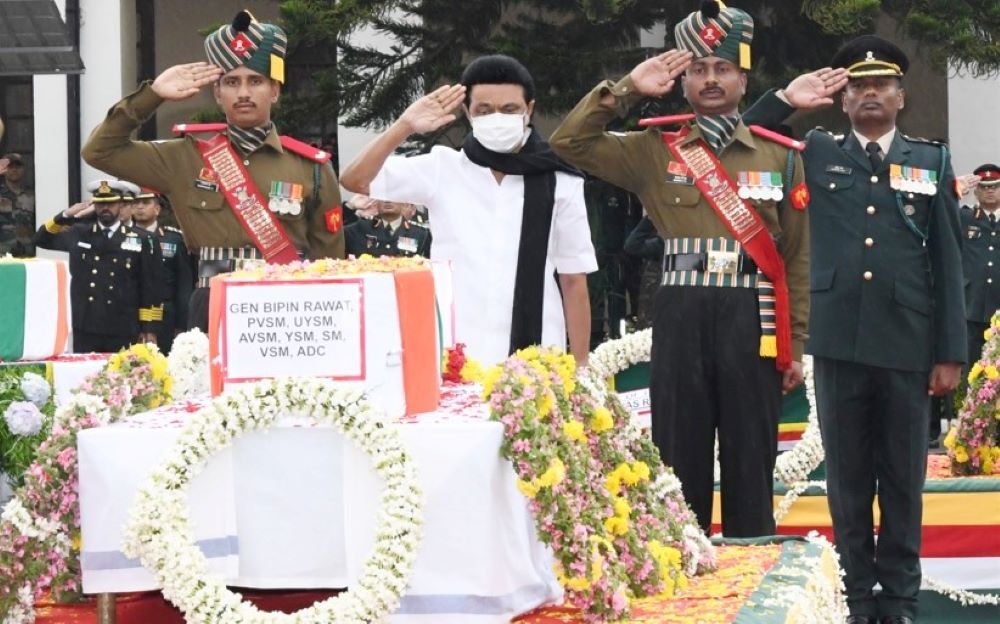 New Delhi: The last rites of Chief of Defence Staff General Bipin Rawat and his wife Madhulika Rawat will be performed tomorrow in Delhi Cantonment. Their mortal remains are expected to arrive in the National Capital in a military plane by this evening. Before that a wreath-laying ceremony will take place at the Madras Regimental Centre in Wellington today. Chief of Army staff General MM Naravane, IAF Chief Air Chief Marshal VR Chaudhury and Chief of Naval Staff, Admiral R Hari Kumar will reach Wellington this morning to attend the wreath-laying ceremony.

General Bipin Rawat, his wife Madhulika Rawat and 11 others died in a tragic chopper crash in Tamil Nadu yesterday. The mishap took place when the Mi-17V5 helicopter carrying Rawat and 13 others crashed shortly after it took off from an IAF base in Sulur near Coimbatore in Tamil Nadu. The Indian Air Force has already ordered an inquiry into the chopper crash that led to Rawat’s untimely death. Lone survivor in the crash, Group Captain Varun Singh is under treatment at a military hospital in Wellington.

According to AIR correspondent, the mortal remains of the Chief of Defence staff General Bipin Rawat and eleven others will be taken to the Madras Regimental Centre at Wellington at around eleven am. The autopsy formalities are expected to be completed before being shifted. All arrangements have been made at the Madras regimental Centre Grounds to pay respects to the mortal remains of General Rawat and the others before being taken to Delhi.

Chief of Army staff General Mukund Narawane, Air Chief Marshal V. R. Chaudhury and Naval Chief Admiral Hari Kumar are expected to pay their respects to the departed. Tamilnadu Chief Minister M.K Stalin who is presently in Conoor will also pay the last respects at the Wellington Centre. Military vehicles decorated with flowers are seen reaching the venue today morning to carry the remains to the Sulur Air Field today afternoon. The accident site has been cordoned off to clear the burnt debris of the helicopter. Little is known about the condition of the Group Captain Varun who is undergoing treatment for 80 percent injuries at the Military Hospital.

Uttarakhand government has declared a three-day state mourning in the state. Chief Minister Pushkar Singh Dhami said that Uttarakhand will always be proud of its son. He said, Gen Rawat has made great contribution to the country’s security and the nation will always remember his courageous decisions. General Rawat belonged to Saina Village in Pauri Garhwal district of the state.