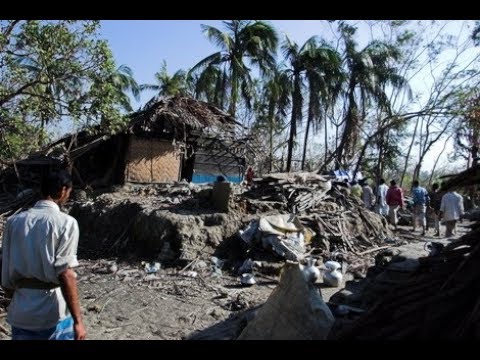 The year was 1999. The date was October 29 and the time post noon, when suddenly the sky appeared pale and hell broke loose within minutes followed by a stormy gale turning to a Super Cyclone . The blitzkrieg lasted around 36 hours with the wind velocity touching over 260 kilometre per hour. Then it was all over.

On the tranquil bosom of Erasama and adjoining areas in Jagatsinghpur a graveyard was created and an unending stretch of  carpet of corpse kept the survivors stunned. The tides from the sea went up to 25 to 30 metre propelled by a cataclysmic cyclone that was so ruthless, claiming over 10,000 human lives and lakhs of livestock . There was a sort of sobbing epidemic everywhere subsequently benumbed by trauma.

Erasama, Padampur, Naghori, Kujang and many other hamlets were reduced to spongy blankets of dead human and animal bodies. But one cannot forget the horror in a hamlet called Dahibara, where every trace of life was wiped out  except the bodies of two infants lying on their faces. The scary footprints of an apocalyptic rage of nature that did not spare even a single house nor anything worthy of nostalgia.

Thirty six hours of the fury of nature had left the survivors so shaken that till the third day of the cyclone they could not recover from the terror of abandonment and transience. Because they had seen death from so close, from the shattered shelters and from the tree branches from where they had seen their family members slowly collapsing by the incessant rain and freezing cold and then falling down like ripe fruits on the ground

When this reporter reached Paradeep, the port town looked almost tonsured with thousands of trees being uprooted. However, the most disturbing sight was at the town’s exhibition ground where over a hundred bodies were lined up for the mass cremation. Suddenly, we noticed an old man in his 80s, walking at the site taking close look at each body. When asked what was he searching for, his reply was “my son has been missing for last three days”. His fatigued eyes were, as if, burning in a stove of despair.

An all pervasive air of pensive sadness coupled with a tranquility that was so disturbing . The cluster of villages pulverized by the Super Cyclone remained rather melancholic for over a fortnight. This day may help a throwback to the horror of 19 years back. Nature always restores itself and we must keep that in mind.