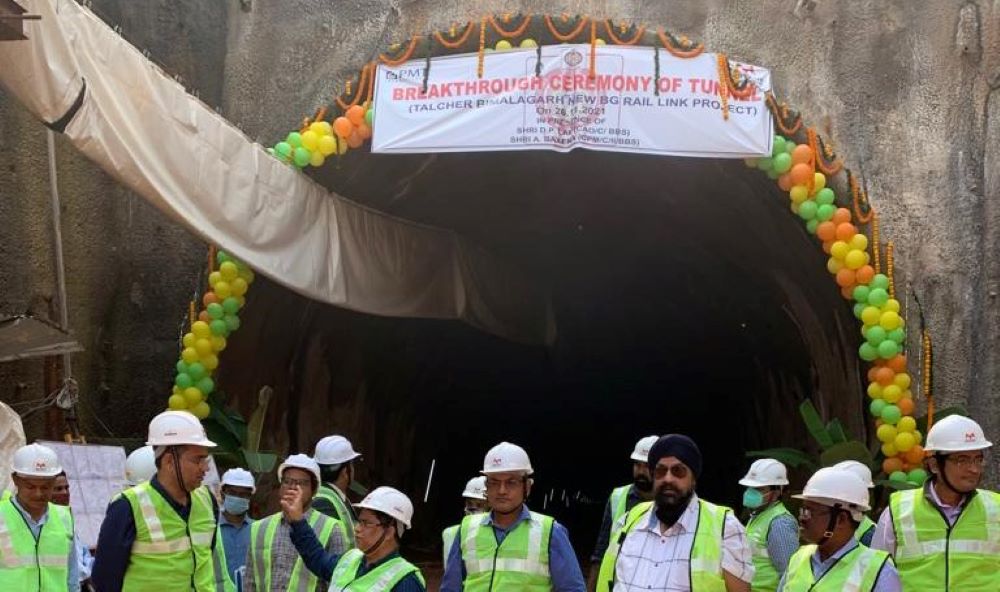 Bhubaneswar: Ministry of Railways has given priority for early completion of ongoing Railway projects in this region. During his last visit to Odisha, Union Minister of Railways advised officials to take necessary action and to coordinate with other agencies, so that the long pending sanctioned work will be completed at the earliest.

In view of the above, the Talcher-Bimlagarh new BG Rail Link Project (149.78Km) sanctioned in the year 2003-04 achieved a major milestone as Engineering Team of ECoR Construction wing conducted final detonation to force the Breakthrough in the 840 M long Tunnel in Baruan Hill between Sunakhani and Samal Stations of the ongoing project.

The project has faced major roadblocks due to slow progress of land Acquisition in Deogarh and Sundergarh Districts. ECoR administration is in constant touch with State and District administration to expedite the land acquisition work in the above two Districts, so that, construction of this project from Bimalagarh side will be carried on.

Railways have completed & commissioned 20 kms of rail line between Talcher Station and Sunakhani Railway Station in on-going New Rail line between Talcher and Bimalagarh in December, 2019. Work is going on for another 16.30 km stretch between Sunakhani and Parabil in Angul District. Out of 149.78Kms stretch of the total project length, about 79 Kms falls in Angul District, Deogarh has about 32Kms and Sundargarh has about 39 Kms stretch.

Once the project is completed, the Link will reduce the distance between Raurkela and Talcher by about 126Kms. This line will help movement of export quality iron ore through Ports. This project will boost the Economic development of interior districts Angul, Deogarh and Sunargarh of Odisha.