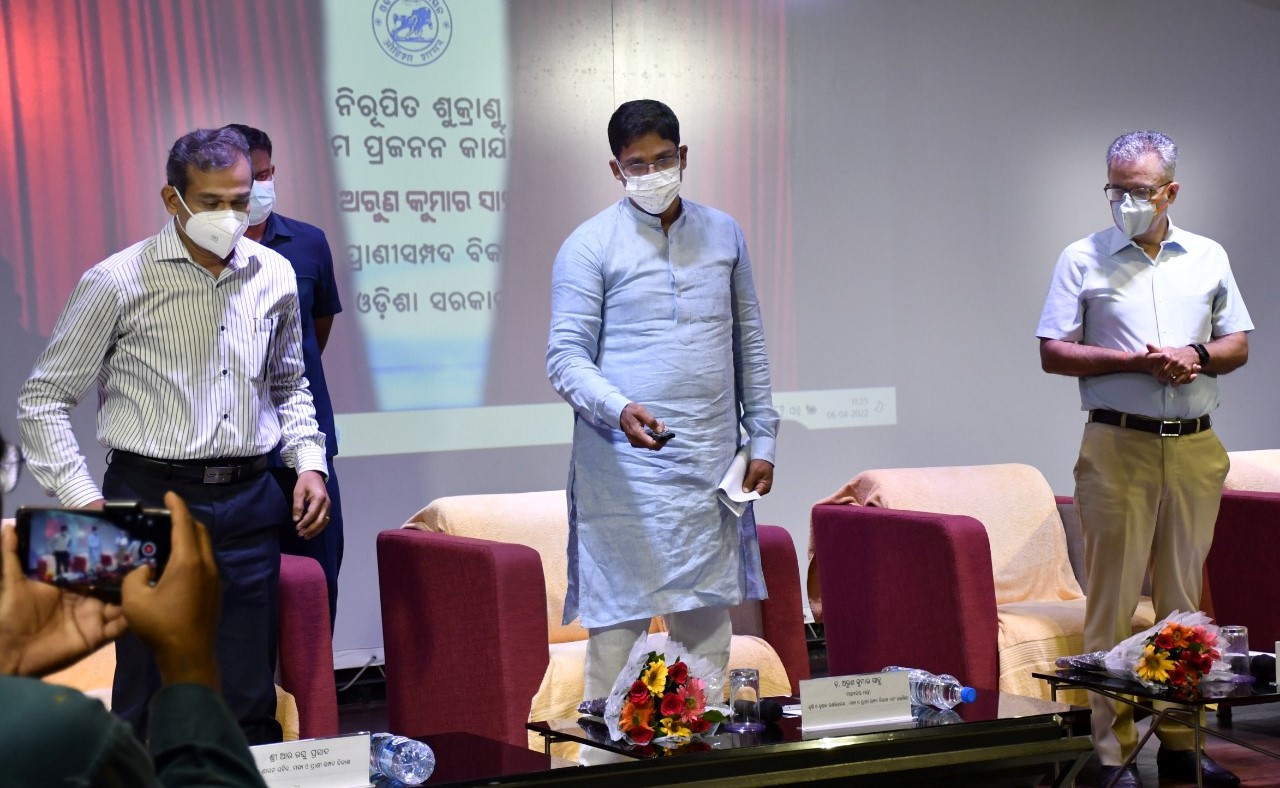 In an event organised at Krushi Bhavan, Bhubaneswar, the Minister stated that sex sorted semen technology would enhance the milk production in the state through production of around 90 per cent of female calves.

Bovine breeding over the past two decades has played a key role in boosting farmers’ income in the state. State Government has taken a number of measures for the development of livestock farmers and dairy development has been identified as an engine of growth for farmers, women self-help groups and entrepreneurs in the state. Milk production in the state has increased around threefold during the last two decades. It has increased from 8.75 lakh metric tons in the year 2000 to over 23.731akh metric tons in 2021 .

Genetic improvement of breed through artificial insemination is taken up in a mission mode and currently around 15 lakh cows are being inseminated annually, free of cost. In order to control Foot and Mouth disease in cattle, immunisation of livestock population is being taken up as a campaign, twice a year.

Fodder cultivation is encouraged through promotion of high yielding species of annual and perennial fodder species. Under the Mukhyamantree Krushi Udyog Yojana (MKUY),subsidy of up to 50 lakh rupees is being provided to farmers and entrepreneurs to set up new dairy units and milk processing plants. Over two lakhs sixty-three thousand dairy farmers of the state are now able to sell their milk to OMFED through 3700 milk producers’ cooperative societies.

The Fisheries & Animal Resourcs Development Department is focusing on cattle breed improvement programs to increase milk production with use of semen of high genetic potential bulls. While using normal unsexed semen, the male to female calves born is of the ratio of 50:50.

0ver the years there has been less demand for male calves, and farmers leave them to stray, causing increase in stray cattle population. Sex-sorted semen technology will ensure upto 90°/o chance of production of female calves with high genetic merit along with reduction of  male  progeny, thereby reducing the burden of farmers to manage male bull calves.

Speaking on the occasion, the Agriculture Production  Commissioner Sri Sanjeev Chopra said that sex sorted semen of advanced breeds such as Gir, Sahiwal, Cross Bred Jersey, Cross Bred Holstein Friesian etc. would be available for farmers. The Artificial Insemination programme is being implemented in accordance with the Odisha Bovine Breeding Policy.

Principal Secretary, Department of Fisheries and Animal Resources Development Sri R Raghu Prasad stated that the sex sorted semen programme will be implemented in all districts. The State Government will be providing 75 per cent subsidy to the dairy farmers.

While the cost of a single dose of sex sorted semen is Rs. 715, the government provides it to dairy farmers at Rs. 180 per dose. Further, in the Odisha Mineral Bearing Areas of the state covered under the OMBADC program, the sex sorted semen program will be provided with 100 % subsidy. During the year 2022-23, initially over 5.50 lakh doses of sex sorted semen will be utilized to cover over 1.20 lakh dairy animals in the State.

The event was attended by the Director of Animal Husbandry and Veterinary Services, experts from the College of Veterinary Science & Animal Husbandry, departmental officials and dairy farmers from the state. At district level, the event was attended by dairy farmers and departmental officials through virtual mode.