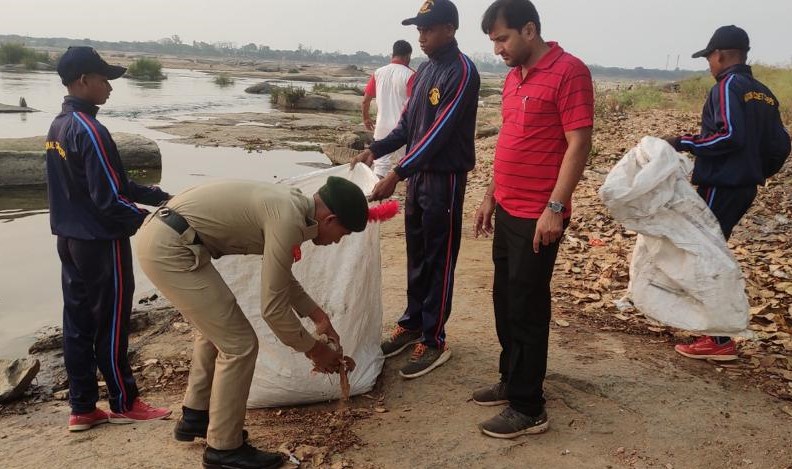 Bhubaneswar: National Cadet Corps (NCC) is carrying out a nationwide campaign to free seashores and river banks from plastic & other waste materials and increase awareness about importance of keeping these clean.

The aim of 5 days-long ‘Puneet Sagar’ Campaign was to propagate the message of ‘Importance of Clean Seashores and Riverbanks’ amongst the local population and future generation. The 5 days activities were under taken with lot of zeal and enthusiasm by NCC Cadets of Odisha as well, from first of this month, concluding on fifth, the National Maritime Day.

During the past 5 days the NCC cadets of Odisha Directorate participated with enthusiasm and vigor  in cleaning up the plastic waste along the seashores in coastal areas and riverbanks in hinterland. In addition to the cleaning activities, cadets made efforts to popularize the campaign through  rallies, interaction with shop keepers and tourists,  nukkad natak, poem recitation, essay writing, painting competitions and debate competitions to generate awareness and educate the target population about measures for conservation and impact of plastic pollution along the sea beaches and other water bodies. Cadets also made deliberate efforts to sensitise people and mobilise support of local populace in preventing pollution of sea beaches through one-on-one contact.

During these 5 days, 2,513 cadets from various NCC Units participated in the Campaign. In addition, 6 NCC Officers, 75 Associate NCC Officers, 58 Permanent Instructor Staff, 121 NCC Alumni, members from 20 NGOs and several dignitaries from State Govt & autonomous bodies actively took part. These cadets of Odisha braved the hot and humid weather to fulfill their commitment towards the nation and the environment.

Cadets cleaned the beaches and gathered 753 kgs of plastic waste in the process and reached out to almost 30,000 citizens, spreading awareness about evils of plastic waste and the importance of maintaining our beaches and water bodies clean. Waste collected was deposited with recycling plants located at various places in the state.

The campaign was extensively covered in the social media through Whatsapp and twitter messages with the hashtag #Puneetsagar. Being the second phase of the of the movement after the efforts in December 21, activities have picked up momentum and more number of institutes and people including representatives from NGOs as well as ex NCC cadets have joined the efforts spearheaded by NCC in the state, to be part of this Campaign.

Officials of United Nations Development Programme (UNDP) and the local administration have pitched in to inspire the cadets and ensure recycling of the plastic waste collected during the campaign.

NCC Directorate Odisha will continue to put in all efforts in ensuring cleanliness of beaches & river banks and in raising awareness amongst the citizens about this, for a cleaner and greener tomorrow.