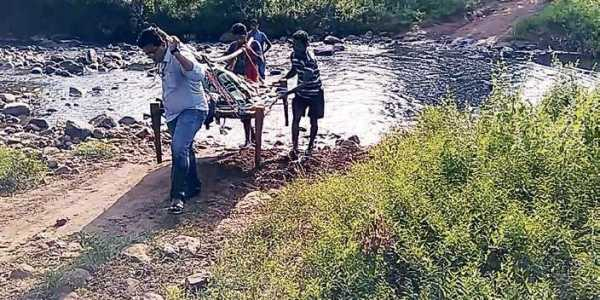 Do the people in the union transport ministry realize the bare facts that traffic rules are not merely confined to towns and cities but in down town interiors where there is no road, let alone movement of vehicles,

Roads and communication also constitute themselves as ingredients of a sound traffic regulation exercise. Let us cite the incident in Malkangiri district’s Nuaguda village where a very sick boy was carried by a sling by few Samaritans which included the Ayush Doctor Shakti Prasad Mishra for 5 kms, Reason is, the assigned Ambulence could not be driven ahead because of bad roads.

This is no isolated an incident and this is not a case where Odisha can be singled out for lacking such amenities in majority areas. It ia pan India more or less. And with the onset of monsoon, things worsen in those areas and it is equally pathetic in cities such as Bhubaneswar, the Smart capital city, where yawning burrows on roads present a reality goes unnoticed by the authorities in the traffic and road repair wings.

The road conditions in almost 50 % of the state seem wanting and the ones who frame the rules remain alien to such basic things.

A drive through many arteries of the capital city reveal that either road damage, digging for cables or other repair and reconstruction works at various points speak about the abject problems for the commuters. On top of that, the other outrages on the roads keep compounding the problems.

Going back to interiors like Malkangiri a lot goes untold and the miseries keep compounding. Either it is a pregnant woman or a sick boy carried in a sling or a bundled dead body taken on the shoulders of a man, such incidents have stopped shaming the people who run the systems in India and the states.

Big things elsewhere in the country have to happen as stock grains for politics and propaganada but no nation can escape the ground realities hiding behind things like Modi-Trump Trysts or cordial teasing  or a ‘physical jurisdiction ‘ on POK or making milestones of politicians  through cements of publicity ,sometimes,  reduce to be useless for a majority although, it may matter for a few relevant.

It is more or less a frog-leaping kind of things going on in the name of political propriety and come-what-may, the leaders are not ready to forgo their own pound of flesh no matter what happens to the larger mass.

A lot of events in recent times have been used quite opportunistically to bolster the political roots than the basics and after the event-to-be in America, where a President, (Trump) who is in the habit of speaking through his hat often, is one whom the Prime Minister Modi has chosen him to be the touch-stone for the latter’s political significance in the world.

Such things, standing in contrast to each other, will go on , regime after regime. But if one dares calls an effort at popularity through events or their propaganda, then you are not there or may be asked to wear a band of anti-national.