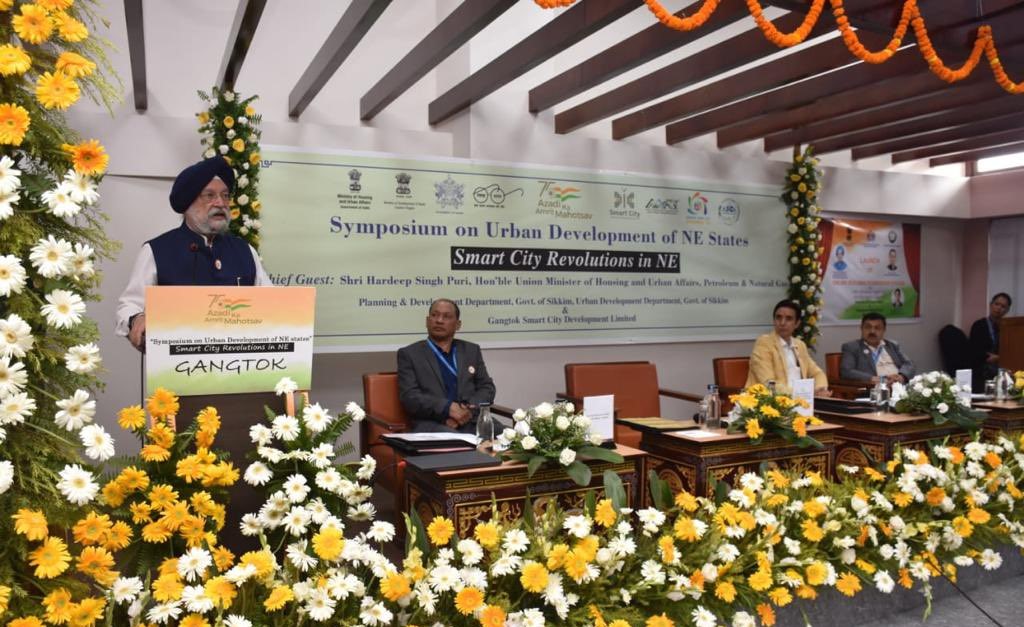 New Delhi: Reiterating the Union Government’s commitment for continuous increased efforts on all-round development of the North-Eastern States, the Union Minister of Housing & Urban Affairs and Petroleum & Natural Gas, Shri Hardeep Singh Puri said here today that “Recognising that some additional support is needed for the Smart Cities to complete certain projects, including in Sikkim. I am happy to announce today that we have agreed to amend the funding pattern and raise it to 90:10, thus ensuring that many projects in the region will reach completion”.

He was addressing a symposium on ‘Urban Development in NE States: Smart City Revolution’, organised under the ongoing Azadi Ka Amrit Mahotsav: North East Festival in the Sikkim capital. The weeklong festival in all the eight NE States has been organised by Ministry of DoNER. Shri Puri also launched the Online Building Permission System (OBPS) of Government of Sikkim at this event and praised the State Government and Gangtok Municipal Corporation for being the first State to implement OBPS in the region. Attending the programme as chief guest, Shri Puri expressed satisfaction that all the seven urban local bodies in Sikkim have achieved ODF status under the Swachh Bharat Mission-Urban.

Mentioning that the Prime Minister himself has visited the NE region more than 30 times, Shri Puri said that in the important sectors of power, water supply, health, connectivity and education related development projects, more than 95% of Rs 18849 crores that were budgeted for development of the region have been fully utilised during the last eight years. The past five years especially, underpinned by the ‘Look and Act East Policy’, have been transformational for the North-East Region, he added.

Lauding the successful implementation of Smart City projects worth Rs 2474 crores in Gangtok and Namchi, Shri Puri assured all help from his Ministry for other projects proposed by the Sikkim Government. He added that a new scheme- Prime Minister’s Development Initiatives for North-East ( PM-DevINE)- announced by the Finance Minister in the Union Budget with an initial allocation of Rs 1500 crores will fund infrastructure, guided by the PM Gati Shakti Mission, and social development projects based on the felt need of the North-East. The South Asian Sub-Regional Economic Cooperation (SASEC) road connectivity programme will also help in making the region more connected and accessible to the rest of the country, Shri Puri pointed out.

By developing this robust infrastructure and services over the last eight years the massive potential of this region has finally been unlocked. With a growing number of food parks, textile industry and information technology the North-East has grown its potential to be the trade link between India and South-East Asia, Shri Puri pointed out.