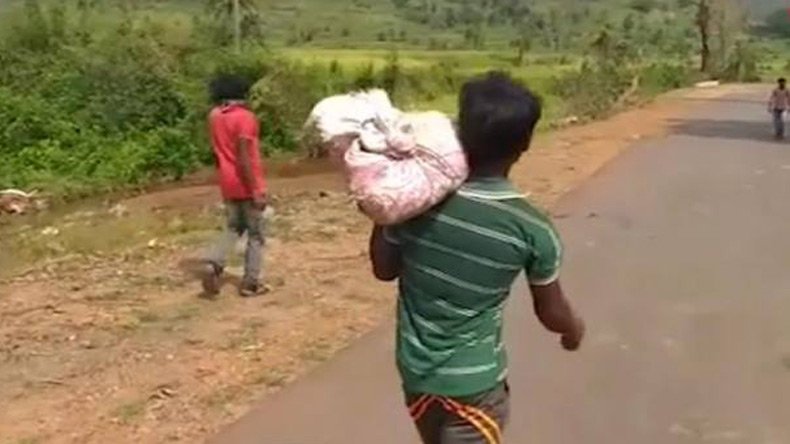 May be such news clips from Odisha sometimes make an interesting stuff for the politicians or for the media for a day or two but the impressions such incidents create are pathetic. One wish the state
administration might rue it’s monotonous assertion that there is nothing wrong. A system should never allow a situation when the body of a human is subjected to an ignominy and sensation drive can be
halted somewhere to make the reality appear real. Patients transported in cots or carried on shoulders for miles  may be an usual sight elsewhere in the country but that should not help disguise the severe
downturn in the health sector. Highlighting the abject backwardness, in whatever shape, in  a state, is
disturbing . Be it Dana Majhi shoulder-loading his dead wife or now in Gajpati district of Odisha,   a man  shown in a video clip carrying his daughter’s body on the shoulders ! Almost a replication of Dana and in both the cases, the videos were presumably done by a fleet of cameras or mobile phones. Even the presence of media teams can not be ruled out as is evident from  the wide shots in which the father was walking along with the daughter’s body  . The girl had died during the post cyclone deluge . What was amazing was the glee writ on a few faces of the onlookers and the lack of concern from the people as if it was an orchestrated photo op. If  it was an over-drive propelled by any kind of politics to push forward
a certain agenda then it is bad and slanderous.

It must be made clear that the attempt to describe the surrounding is not to hold any brief for the local or state administration as a whole. It was a bizarre manifestation of the failures on the part of the system. A complete mishmash between claims and deliveries which no five or ten lakh rupees can compensate. And , of course a cruel contradiction of the chief minister’s ‘Ama Gaon, Ama Bikash ‘ Yojna still unable to join the dots. Which is one of his flagship schemes helping his outreach into deep interiors. Now , coming back to the preening cameras or even the gaping eyes there, perhaps, either the media men or the people,  had a role to play in such circumstances. Professional and human  considerations not necessarily go diametrically opposite to each other. A transport could have been arranged after the shot taking exercise .

All was done in a haste. The video going viral, a panicked state government caught unaware and to ward off any further adversity in a climate of elections-to-come, it was thought prudent by the BJD government to douse the fire of general repulsion by giving away the compensation . But many
more such realities are there at the ground and many more may unfold in the days to come. But it’s not politics always. The local administrations are not there to be waken up by the media only.
_________________________________________