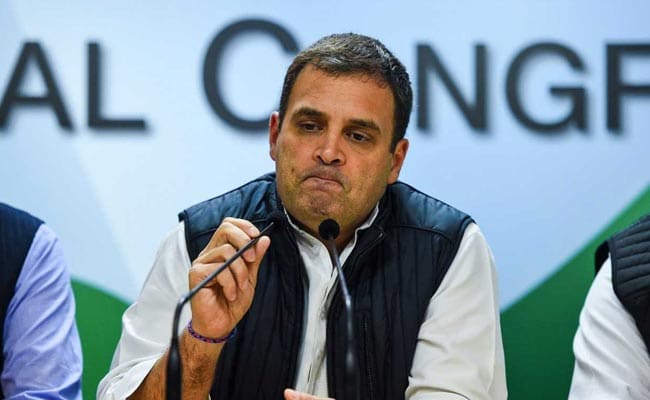 It was an year of ascendancy for the Indian National Congress.

Under the leadership of its president Rahul Gandhi, the Congress ousted the Bharatiya Janata Party  in the three Hindi  heartland states of Rajasthan, Madhya Pradesh and Chhattisgarh, to emerge as a formidable contender for power in the run-up to the 2019 Lok Sabha elections.

With the decisive wins by Congress on the first anniversary of his assumption of office as party president,  Gandhi  arrived as a force to reckon with in the realm of Indian politics, denting the invincible Modi brand.

The Congress youth icon leading the grand old party to victory in the three Hindi states on December 11, his first win since he took over the reins of the party, catapulted Gandhi as an unbeatable leader and an impregnable force in  Indian politics.

More importantly,  the win pitchforked the Congress into the leadership role among the  opposition parties who are looking  to take on the BJP juggernaut in the 2019 Lok Sabha elections.

With these wins, Gandhi succeeded in emerging as a tall leader of the Opposition who could pose a formidable challenge to Prime Minister Narendra Modi.

Though the proposal has not found favour with the Communist Party of India (Marxist), Samajwadi Party and Bahujan Samaj Party, some of the recent moves by various Opposition leaders indicate that they could eventually come round to the idea.

This was evident from the fact that BSP chief Mayawati on December 12, a day after the assembly poll results, announced that her party was willing to support the Congress to form a government in Madhya Pradesh to prevent the BJP from coming to power. Mayawati’s move was seen as an indication that the BSP  would join the grand alliance of the opposition for the 2019 Lok Sabha polls.

After the assembly poll results, the Samajwadi Party also announced its decision to support the Congress in government formation in Madhya Pradesh.

The posture taken by the BSP and the SP was in sharp contrast with the stand of these parties before the assembly polls where they had decided to fight the assembly elections in Madhya Pradesh independently.

In a way it was reflective of the new found respect of the opposition leaders for Gandhi’s leadership.

All of this went to show that an year after assuming office as Congress president, Gandhi has succeeded in emerging as a tall leader of the opposition who can pose a formidable challenge to Prime Minister Modi.

It was also evident from the new confident and aggressive tone of Gandhi, which is in sharp contrast to his image as a reluctant politician in the 2014 Lok Sabha elections, where the Congress was reduced to 44 seats.

Several assembly elections held since the 2014 polls, including assembly polls in Haryana, Maharashtra and Uttar Pradesh, saw the party losing to the BJP.

Political observers say that the  ascendancy of the Congress began in the Gujarat assembly polls where  the party under Gandhi’s leadership, put up a formidable performance against the BJP.

The Congress, under the leadership of Gandhi, giving the  saffron  party a run for its money in its citadel  galvanised an otherwise demoralised Congress cadre and also silenced his detractors within the party.

A rejuvenated Congress under him managed to cobble together a coalition with the Janata Dal (Secular) in the Karnataka after the assembly polls in which the BJP emerged as a single largest party. However, quick action by the Congress saw it form a coalition government with the JD(S) with HD Kumaraswamy being the chief minister.

In the past year, he specially attacked the premier on the alleged irregularities in the Rafale deal both inside and outside Parliament.

At public rallies and meetings during the campaign for the assembly elections, Rahul mounted a sharp attack on PM Modi on the issue of waiver of farm loans and the alleged irregularities in the deal for Rafale fighter jets.

In his attack on PM Modi on the Rafale acquisition, Rahul accused the National Democratic Alliance Government of scrapping the United Progressive Alliance deal on the jets, which envisaged the sale of 126 aircraft from the Dassault company, with a deal to buy just 36 planes, disregarding the requirement of the Indian Air Force.

He also charged Modi with scrapping the offset contract given to the state-owned Hindustan Aeronauticals Limited to benefit Anil Ambani’s Reliance Defence, which had no prior experience of manufacturing defence equipment.

The Congress president also alleged that the NDA Government signed the deal for  the Rafale aircraft at three times the price of the contract during the UPA rule, causing a heavy loss to the public exchequer.

During his public meetings, Gandhi also charged the PM with ignoring the interests of the farmers and refusing to heed to their demand for loan waivers while foregoing advances worth Rs 3.5 lakh crore of  his few corporate friends.

On July 20, participating in a debate on a no-confidence motion against the Modi dispensation  in the Lok Sabha, Rahul stunned everyone by giving a spontaneous  hug to the premier.The gesture by the Congress  president came after his sharp attack on the PM for alleged irregularities in the Rafale deal.

Besides, Gandhi held joint news briefings with leaders of opposition parties across the nation on various issues.

The Congress president also held conferences in US, Europe and West Asia as part of the party’s  Non-Resident Indians outreach ahead of the 2019 national polls to tap into their votes and build up his image as a global leader.

Gandhi, who took over the mantle of party president on December 16, 2017, made vigorous efforts to ensure the revival of the party.

It is under his leadership that the party, despite differences within the state units in Rajasthan and Madhya Pradesh, fought these elections unitedly.

While in Rajasthan, Ashok Gehlot and Sachin Pilot were asked to work together, in Madhya Pradesh, Kamal Nath, Jyotiraditya Scindia and Digvijaya Singh were seen fighting the elections unitedly.

The win in the three Hindi heartland states showed that Gandhi’s view on farmers’ distress and unemployment had struck a chord among farmers and youth pan-India.

Also, the decision of the newly-installed Congress governments to announce waiver of farm loans within hours of assuming power pitched Gandhi as a leader for whom  interests of agriculturists assume topmost priority.

The latest electoral victories, party leaders feel, had  elevated Gandhi stature within the party as well as among the opposition parties.

Post its win in the three Hindi heartland states, the Congress and its Gandhi are now setting the agenda for the Lok Sabha elections.

In fact the recent statement by Modi that his government was looking at putting 99 percent of commodities at a single Goods and Services Tax rate was seen as the government coming round to the Congress demand for a single standard rate of GST.

The latest meeting of the GST council saw a reduction of imposts on several items from 28 to 18 percent.

With Rahul and the Congress setting the agenda for the 2019 Lok Sabha elections, scoring victories in the three Hindi heartland states, the grand old party has strengthened its position as the centre of any national formation after the polls.

The Congress may have wrested power from the BJP in the three Hindi heartland states but it found itself facing a standoff over the choice of its chief ministers in Rajasthan, Madhya Pradesh and Chhattisgarh.

While Rajasthan saw a tussle between senior party leader Ashok Gehlot and state chief Sachin Pilot over the post of chief minister, Madhya Pradesh saw a race between nine-time Lok Sabha MP Kamal Nath and young leader Jyotiraditya Scindia for the post. In Chhattisgarh, there was a tussle for the post between Bhupesh Baghel and T.S. Singh Deo.

After several rounds of consultations held by the top leadership with the various CM aspirants and the AICC in charges, Ashok Gehlot was announced as chief minister of Rajasthan with Sachin Pilot being named as deputy chief minister. In Madhya Pradesh, Kamal Nath was named as the CM while in Chhattisgarh Bhupesh Baghel was named as the Chief Minister with T.S. Singh Deo being given a key cabinet portfolio.

With Rahul at the helm of affairs, it was an year which saw his mother and former party president Sonia Gandhi maintain a low key except for a few appearances like her attending the India Today conclave where she revealed that she never wanted Rajiv Gandhi to come into politics.

After the  declaration of results of the recent assembly elections,  Sonia Gandhi expressed happiness over the outcome, particularly in the Hindi heartland states of Madhya Pradesh, Rajasthan and Chhattisgarh. Reacting to the results, she called it a ‘Congress victory over negative politics of BJP’ and said she was ‘happy’ with the verdict of the people. She was also believed to be a part of the deliberations within the party to resolve the standoff for the selection of chief ministers of Rajasthan, Madhya Pradesh and Chhattisgarh. (UNI)