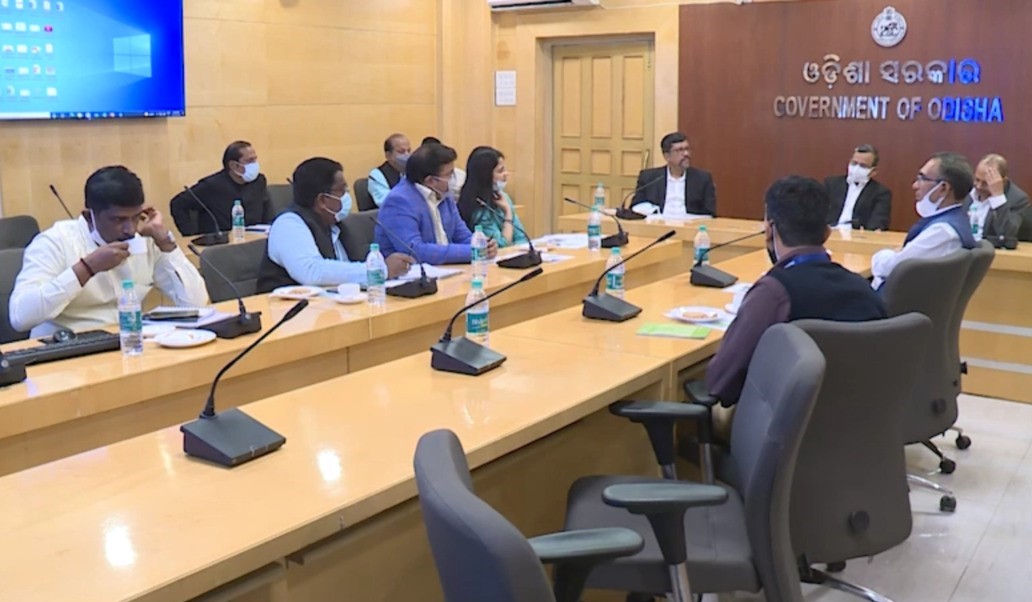 Bhubaneswar: Odisha Chief Secretary Suresh Chandra Mahapatra, Development Commissioner and Special Relief Commission Sri Pardeep Kumar Jena along with senior officers of the State interacted with the central inter-ministerial team today evening after the team’s two days field visit to different areas of the State for assessment of the losses caused by the cyclone Jawad which crossed close to Odisha coast during the current month.

The Six member team lead by Saurav Ray, Joint Secretary Ministry of Home affairs was divided in to three sub-teams after reaching Odisha and having a preliminary discussion with Special Relief Commission Sri Jena. The sub-teams visited the affected areas in the districts of Ganjam, Puri, Jgatsignhpur, Cuttack, Jajpur and Kendrapara.

After having a feel of the situation at the ground zero level, the team discussed about the damages with senior officers of the State in a high level meeting held in State Lokseba Bhawan. Chief Secretary Sri Mahapatra apprised that this year there was bumper crop in many districts as the deficit rainfall during the initial months were covered up in the following months of cropping season.

The crops were almost in ripening condition when the cyclone came near Odisha coast with heavy rainfall. The farmers were given advisories to harvest the crop, and bring those to safe places as per the forecast of Indian metrological department. The farmers also tried their best. But all the ripen crop could not be harvested and collected within a short span of time. Besides, many variety of paddies and other major crops were nearing the ripen stage.

Development Commissioner Jena said that because of standing water in the agricultural fields, the farmers also could not sow seeds for the rabi crop. Sri Jena added, “Odishan climatic condition is also not conducive for late rabi crop as the temperature starts growing by mid February”.

The inter-ministerial team leader Ray mentioned that they saw heavy loss to farmers at the ground level caused by the cyclonic rain. He opined that the famers who suffered loss needed governmental support and assistance.

Discussions in the meeting showed that as per the eye estimates, standing crop on more than 5.78 lakh hectors in around 131 blocks of twelve districts were severely damaged. These districts were Ganjam, Bhadrak, Puri, Cuttack, Balasore, Kendrapara, Keonjhar, Khordha, Jagatsinghpur, Nayagarh, Jajpur and Mayurbhanj. The ground level assessment was going on and it would be completed in seven days. Detail damage report would be sent to the team just after completion of the filed level assessment.