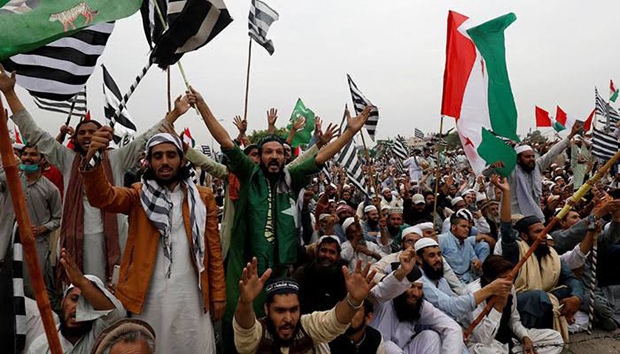 Islamabad, Nov 5 (UNI) A meeting of the government’s negotiating committee to discuss the next course of action regarding the Azadi March, chaired by Pakistan Prime Minister Imran Khan, is currently underway. The meeting is being attended by Defence Minister Pervez Khattak, former finance minister Asad Umar and Education Minister Shafqat Mehmood, Geo News reported on Tuesday.

During the meeting, the government’s negotiating committee will inform the premier about their talks with the opposition’s Rehbar Committee. Punjab province Assembly Speaker Chaudhry Pervaiz Elahi is also attending the meet, during which he will update the Pakistan Prime Minister on his meeting with JUI-F chief Maulana Fazlur Rehman. Earlier, talking to the media, Khattak said the opposition is adhering to the agreement it had signed with the government.

According to  Durrani, they had presented demands of the Opposition to the government and detailed discussions were held in this context.

The government committee, led by Mr Khattak, will meet the head of Rahbar Committee headed by Jamiat Ulema-e-Isalm Fazl’s (JUI-F) Akram Khan Durrani in Islamabad on Tuesday too, to resume talks regarding the Azadi march.
The ‘Azadi’ March, which started from Sindh on October 27, concluded on October 31 in Islamabad.

The 48-hour ultimatum given to the Prime Minister to resign was extended after the JUI-F chief said the Opposition’s Rahbar Committee will take a decision, after holding talks with the government negotiating committee.