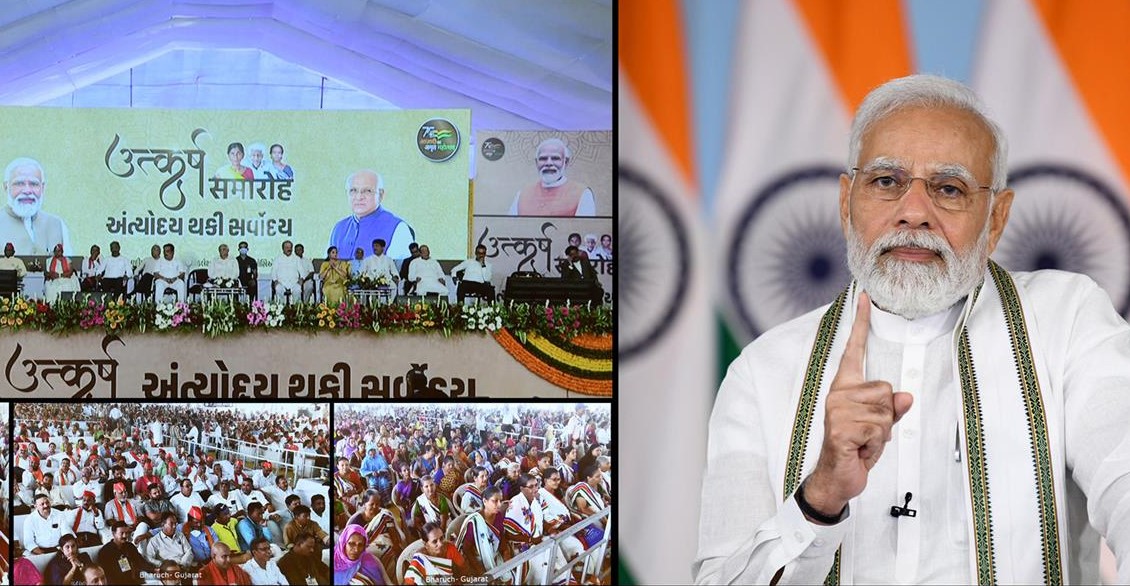 New Delhi: Prime Minister Narendra Modi today virtually addressed ‘Utkarsh Samaroh’ held at Bharuch in Gujarat. The programme has organized to mark the celebration of 100 percent saturation of four key schemes of the state government in the district. These will help in providing timely financial assistance to those in need.

Speaking on the occasion through video conferencing, the Prime Minister Modi said that today’s Utkarsh Samaroh is a testimony to the fact that when the government sincerely reaches out to the beneficiary with a resolution, that earned fruitful results. He congratulated Bharuch district administration and Gujarat government for cent-percent saturation of 4 schemes related to social security.

Modi said that almost half of the country’s population was deprived of toilets, vaccination, electricity connection and bank account facility when our government came into power in 2014. But now we have been able to bring many schemes closer to 100 percent saturation with the efforts of everyone. He said that 100 percent coverage of beneficiaries means the success of Sabka Saath, Sabka Vikas. No one should be left behind from every welfare scheme of the poor.

Prime Minister Modi also interacted with the women beneficiaries of the various schemes. Modi asked about the difficulties faced by them and also made several suggestions for their betterment. A group of old age widow women also presented a big “Rakhi” to the Prime Minister on this occasion. Modi termed this “Rakhi” as the blessings of women. Gujarat Chief Minister Bhupendra Patel distributed the benefits of various welfare schemes to the people on this occasion. Senior Ministers of Gujarat government and State BJP President C.R. Patel were present on the occasion.

During the drive from January to March this year, taluka-wise Whatsapp helpline numbers were announced to collect information about those who were not receiving benefits of the scheme. Utkarsh camps were organized in all villages and wards of municipality areas of the district, to collect the necessary documents for on the spot approval. Incentives were also given to Utkarsh assistants to further facilitate the drive.