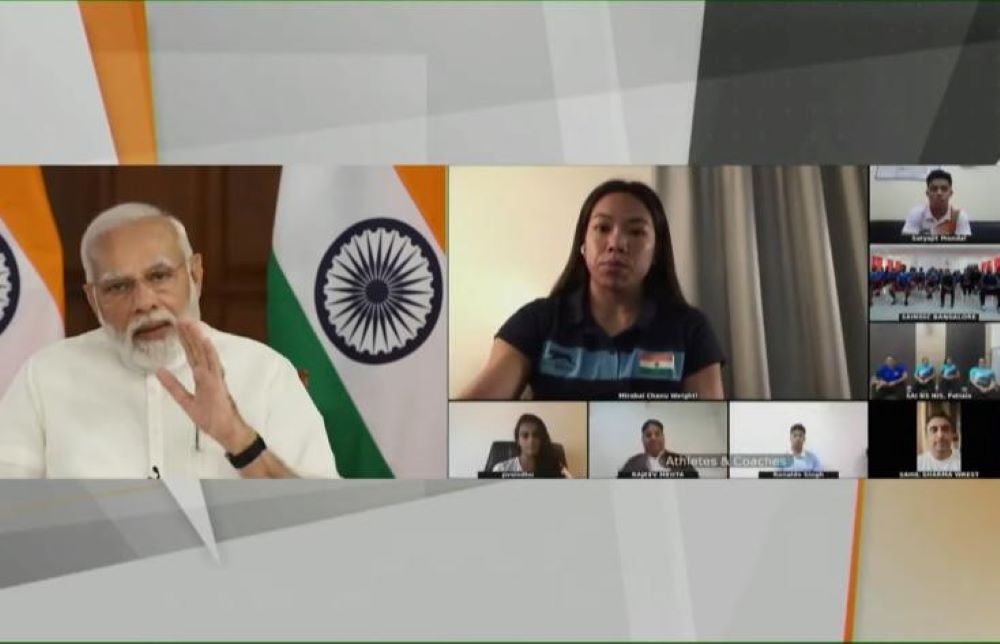 New Delhi: The Prime Minister Shri Narendra Modi interacted with the Indian contingent bound for the Commonwealth Games (CWG) 2022 today via video conferencing. The interaction was attended by both athletes as well as their coaches. Union Minister for Youth Affairs & Sports and Information & Broadcasting Shri Anurag Singh Thakur and Secretary for Sports were also present.

The Prime Minister wished the Indian contingent for Commonwealth Games on International Chess day. The Chess Olympiad is also taking place from 28 July in Tamil Nadu. He wished them for making India proud, as their predecessors did before. He informed that more than 65 athletes are participating in Commonwealth for the first time and he wished them to make a tremendous impact. He advised them to “play with all your heart, play hard, play with full force and will play without any stress”.

The PM asked him why he chose the steeplechase field while working in Siachen. He said steeplechase is all about crossing obstacles and he received similar training in the Army. The PM asked about his experience of losing weight so fast. He said that the Army motivated him to join sports and he got extra time to train himself and this helped in losing weight.

The Prime Minister further went on to speak with Achinta Sheuli, a weightlifter in the 73 kg category who hails from West Bengal and asked him how he manages to strike a balance between his peaceful nature and the power of weightlifting in his sport. Achinta said that he has a regular yoga routine that helps him calm the mind.

The PM asked him about his family to which Achinta replied that he has his mother and elder brother who support him through all the highs and lows. The Prime Minister also enquired about how he deals with the injury issues that come with the sport. Achinta replied that injuries are a part of the game and that he nurses them very carefully.

He further added that he analyses his mistakes that led to the injury and makes sure that they are not repeated in the future. The Prime Minister wished him good luck for his endeavours and also praised his family, especially his mother and brother for making sure that all needs of Achinta were met that got him where he is today.

The Prime Minister interacted with Ms Treesa Jolly, a badminton player from Kerala. PM enquired how she chose badminton when Kannur where she comes from is popular for football and farming. She said that her father motivated her to take the sport. PM enquired about her friendship with Gayathri Gopichand and partnership on field. She informed that a good friendship bond with her field partner helps in her sport. The PM also asked about her plans for celebration while coming back.

The Prime Minister interacted with Ms Salima Tete, a hockey player from Jharkhand. The PM asked about the journey of her and her father in the field of hockey. She said that she was inspired seeing her father play hockey. The PM asked to share her experience of playing in Tokyo Olympics. She said that she was motivated by the interaction she had with the PM before going to Tokyo.

The Prime Minister interacted with Sharmila, a para athlete in shotput from Haryana. The PM asked her about her inspiration to start a career in sport at the age of 34 and also grabbing a gold medal in only two years time. Sharmila said that she has had an interest in sports since childhood but due to the family’s financial condition she was married at an early age, and had to face atrocities at the hands of her husband.

She and her two daughters had to fall back on her parents for six years. Her relative Tekchand Bhai, who was a flag bearer supported her and trained her for vigorously for eight hours a day. The PM went on to ask about her daughters and said that she is a role model for the entire nation and not just for her daughters. Sharmila further added that she wanted her daughter to join sports and contribute to the nation.

The PM also enquired about her coach Tekchand Ji who is a former paralympian to which Sharmila replied that he has been her inspiration throughout her career. It was his dedication towards Sharmila’s training that got her to compete in sports. The Prime Minister remarked that others would have given up at the age at which she started her career and then congratulated her for her success and wished her good luck for the Commonwealth Games.

PM asked how remained motivated to pursue this sport for so long. He said that people around him motivated a lot. PM asked how Khelo India helped him. He said that his journey started with Khelo India and PM speaking about him in Mann ki Baat motivated him further. PM praised him for staying motivated even after loss of his father to Tsunami and lose of his mother too soon after.

Addressing the sportspersons after the interaction, the Prime Minister said that he was not able to meet them in person due to him being preoccupied with Parliament despite wanting to do so. He promised them that he would meet them when they come back and their victory can be celebrated together.

The Prime Minister said the current period is in a way the most important period in the history of Indian sports. Today, the spirit of players is also high, the training too is getting better and the atmosphere in the country towards sports is also tremendous. All of you are climbing new peaks, making new peaks, he said.

To those who are entering the big international arena for the first time, the Prime Minister said that only the arena has changed but not the spirit and stubbornness for success. “The goal is to see the tricolor fluttering, to hear the national anthem being played. That\’s why don\’t take pressure, make an impact with a good and strong game”, he added.

The PM said that all the athletes have trained well and with the best facilities in the world and urged them to remember the training and rely on the will power. The Prime Minister further said that what the athletes have achieved is definitely inspiring but they should now aim to create new records and give their best for the country and countrymen.

Even during the sporting events, Prime Minister took a keen interest in the athletes\’ progress. On many occasions, he personally rang up athletes to congratulate them on their success and sincere efforts, while motivating them to do better. Further, upon their return to the country, the Prime Minister also met and interacted with the contingent.