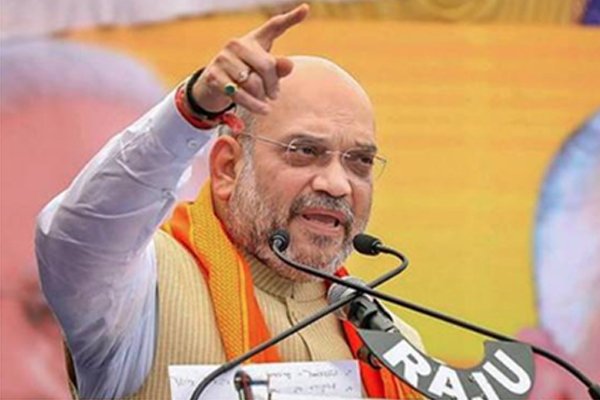 After the viceral attack by Prime Minister Modi branding Naveen-led government in Odisha mired in the ‘PC ‘ filth now the party’s national president Amit Shah has taken over the baton to further sharpen the weapons against the BJD.
Naveen Patnaik can not care less the further vituperatives unleashed by Shah through the National  Executive for its women’s Morcha in Puri.
Shah toed his earlier route of attacking the Naveen government allegedly remaining as a hostage to the bureaucracy that had destroyed the fabrics of democracy by sidelining the elected representatives. The dynamics of politics now driven by officers , Shah rued.
He reiterated the line of Modi on the issues of Ayushman Bharat health scheme,the centrally sponsored programme  ‘Naveen Patnaik is afraid of implementing to avoid any popularity that may go in favour of the PM ‘.
The gradual insecurity for women under BJD dispensation is something that is very worrisome for lakhs of women and a safety shield for the perpetrators of crime against women.
In fact , in essence,  the narratives presented by Shah were mostly repeats of his earlier stance in the past. Shah reiterated BJP ‘s  resolve to uproot Naveen government from Odisha which has even ‘ detached itself from the ideals once espoused by Late Biju Patnaik ‘ .
On the contrary the BJD lays no emphasis to Shah ‘s filibustering ,calling them political frustrations which will not have any impact on the people.
Timing with the Executive meet of BJP the BJD  too holds its statewide Biju Mahila Janata Dal conclave across the state obviously as a counter to Shah’s programme in Puri.
For the students of politics the slang match between the BJP and the BJD reveal an interesting facet of politics that changes colour between Delhi and Odisha.