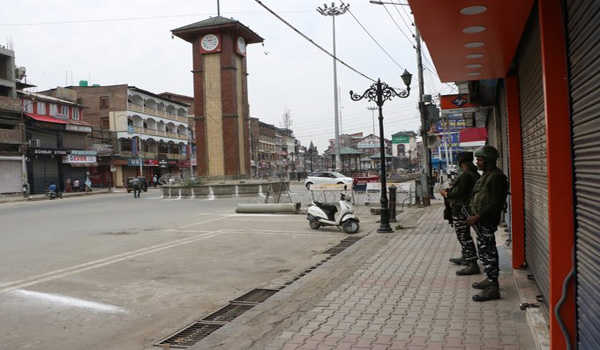 Strike completes three months on Saturday in Kashmir valley, where people are protesting scrapping of Article 370 besides downgrading the state and dividing it into two Union Territories (UTs) on August 5.

Security forces remained on alert to maintain law and order in the valley, where almost all politicians of different political parties, including three former chief ministers — Dr Farooq Abdullah, his son Omar Abdullah and Mehbooba Mufti — are under detention since August 5.

There is no curfew in any part of the valley, including summer capital, Srinagar, where civil secretariat, seat of the Lt Governor and senior bureaucrats closed last week to reopen in winter capital, Jammu, on November 4. However, restrictions under Section 144 CrPC, preventing assemble of four or more persons, remained deployed as a precautionary measure.

All gates historic Jamia Masjid in the down town remained closed to prevent assemble of people in the worship place, stronghold of chairman of moderate Hurriyat Conference (HC) Mirwaiz Moulvi Omar Farooq. The Central Paramilitary Forces (CPMFs) remained deployed in the Jamia market and outside the Masjid, where no prayers, including on Fridays, were held since August 5.

Business and other activities resumed in most parts of Srinagar, including historic Lal Chowk and Gantaghar this morning at 0700 hrs. Traffic jam was also witnessed at some places in the morning.

However, life again came to halt at 1000 hrs when shopkeepers closed their establishments and left for home. Work in government offices and banks, housed in buildings on main roads was affected. In some areas, banks are function in the morning for few hours before closing down again. Most Post offices in Srinagar and its outskirts are functioning for few hours in the morning.

Transport service, including the buses of State Road Transport Corporation (SRTC) buses, remained off the roads. Private vehicles and three-wheelers were also seen plying on different routes, particularly in the uptown and civil lines. However, very less number of vehicles were seen plying in the downtown.

Shops and business establishments remained closed in this and other district and tehsil headquarters of south Kashmir on Saturday, a report from Anantnag said. However, private vehicles were seen plying on the roads but passenger traffic remained off the roads. Complete shutdown also continued in south Kashmir district of Kulgam.

A report from Baramulla said business and other activities remained crippled since August 5 in this and other north Kashmir districts. Traffic was off the roads though some vehicles were seen plying on Srinagar-Uri highway. Additional security forces have been deployed on bridges, connecting down town with civil lines in Baramulla and Sopore towns to foil any demonstration.