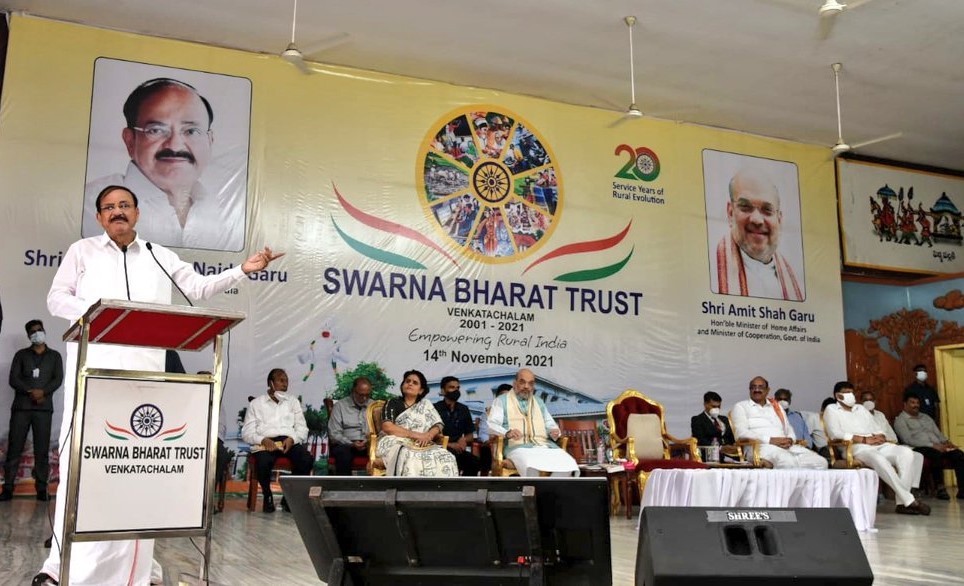 New Delhi: The Vice President M Venkaiah Naidu today called for providing equal property rights to women and highlighted the importance of fully empowering them for the country to make progress.

Participating in the 20th anniversary celebrations of Swarna Bharat Trust at Venkatachalam, Nellore, he pointed out that women constituted nearly 50 per cent of the country’s population and said they should be encouraged to participate in various fields on par with men.

Deploring atrocities against women, Shri Naidu reiterated the need to provide reservations to women in Parliament, apart from imparting skills in various vocations.

Expressing his satisfaction that the Swarna Bharat Trust over the last 20 years has been fulfilling his dream to empower the needy and marginalized sections, particularly in the rural areas, Shri Naidu said that thousands of young rural men and women have been trained in various vocations with many of them becoming successful entrepreneurs. “Most importantly, farmers, women and youth constitute the focus of this Trust. Such service to people is the highest form of devotion”, he added.

Shri Naidu said that he always believed that the poor and marginalized sections need to be empowered through education and vocational skills.

Pointing out that the Trust had never taken any kind of help from the government, he termed it as “no mean achievement” and complimented the Managing Trustee, Smt. Deepa Venkat, trustees and all those who enabled the Trust to meet its objectives.

Underlining the important role of agriculture in the country’s economic progress, he called upon all stakeholders to bestow greater attention on agriculture. Similarly, India’s demographic dividend should be fully realized by skilling and empowering the youth.

Referring to the urban-rural divide, the Vice President called for bridging it with increasing urgency and said that it would also check migration to cities and urban centres from our villages.

The Vice President lauded the Union Government for setting a new tradition in the selection of Padma awardees and conveyed his appreciation to Prime Minister, Shri Narendra Modi and Union Home Minister, Shri Amit Shah, who was present on the occasion.

Responding to the remarks made by Shri Amit Shah on the passage of the bill relating to abrogation of Article 370 in the Rajya Sabha under the Chairmanship of Shri Naidu, the Vice President said it was a historic moment in his life as he had always espoused the cause of total integration of Jammu and Kashmir with the rest of India.

He said that people all over the country rejoiced after the bill was passed following a detailed discussion.

Referring to COVID-19 pandemic, the Vice President appealed to the people to shed vaccine hesitancy and get themselves vaccinated.