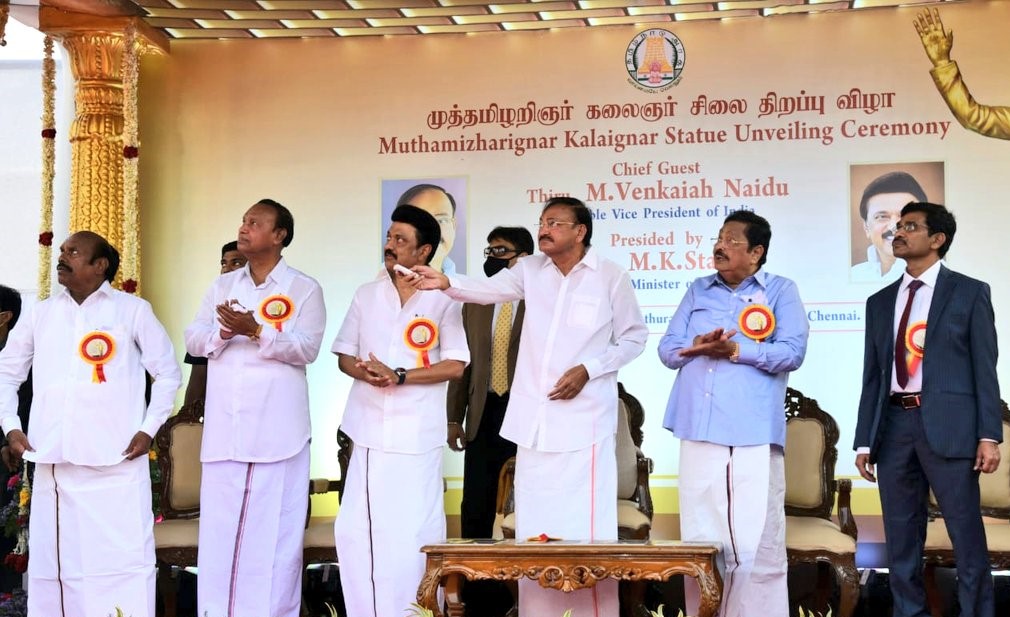 Unveiling the statue of Kalaignar Karunanidhi on the occasion of the 98th birth anniversary celebrations of the legendary DMK leader organised by the Government of Tamil Nadu at Omandurar Estates in Chennai, Shri Naidu paid glowing tributes to Karunanidhi and pointed out that he was among leaders who strengthened the country’s federal character. He added that in the process, the nation emerged as a strong ‘Team India’.

The Vice President observed that Karunanidhi was among such exceptional leaders who placed people at the centre of their work and helped India shape into a vibrant, progressive democracy upholding the vision contained in the Preamble of the Constitution. Shri Naidu added, “We are quite fortunate that, after our independence in 1947, we have had, in our country, a series of illustrious Prime Ministers and Chief Ministers who have shaped the development trajectory of our great nation.”

The Vice President hailed the efforts made by these leaders, including Kalaignar Karunanidhi, in the States, Union territories and at the Union government level to respond to people’s aspirations, design policies, create programmes and build institutions. “Guided by the enlightened pathway shown by the Constitution- makers, these leaders at various levels, have tried to give meaning to the words in our Constitution,” Shri Naidu said.

The Vice President said that an important requirement in democracy is the principle of agreeing to disagree. Stressing the need for political leaders to respect each other, the Vice President said that they should consider each other as rivals, and not as enemies. Irrespective of caste, creed, religion or political affiliations, we are all Indians first and we should work for the growth and development of the nation, he added.

The Vice President observed that each of our States has a vibrant, unique quality, marked by linguistic richness, literary and cultural treasures, breathtaking architecture, remarkable craftsmanship, scientific, industrial and agricultural accomplishments. “We, as a nation, have moved forward and have made perceptible progress by recognizing and celebrating this fascinating diversity and capitalizing on the inherent strengths in each State.

We have realized that we can bring about a rare synergy if we tap into the abundant, hidden energy that is waiting to be kindled within each of our citizens in each of our States and this is what exceptional leaders like Karunanidhi tried to do”, Shri Naidu added.

Shri Naidu pointed out that India is on the move and urged all political parties in different states to work for people’s welfare. “If states develop, India will develop,” he said.

The Vice President termed Karunanidhi a visionary leader who focused on empowering marginalised people and those outside the circle of development. “He was an able Chief Minister who has left a lasting legacy of development and social welfare”, Shri Naidu said.

He recollected that “Uzhavar sandhai” or farmer’s markets and a health insurance scheme for the poor were among the many initiatives which reflected Karunanidhi’s farsighted approach. Describing Karunanidhi as one of India’s most dynamic chief ministers, the Vice President pointed out that he gave a boost to industrial growth, infrastructure and information technology in Tamil Nadu.

Shri Naidu recalled that he interacted quite closely with Kalaignar Karunanidhi over several decades during the course of his long journey in public life. The Vice President said that the DMK stalwart was a leader who stood firmly by his political beliefs and convictions. In this context, he pointed out that Karunanidhi had opposed the imposition of Emergency by the then Prime Minister, Mrs. Indira Gandhi, in clear and unambiguous terms.

Expressing his admiration for Karunanidhi’s multifaceted personality, Shri Naidu described the DMK leader as a versatile person with a unique combination of a number of talents. In the words of the Vice President, “Kalaignar Karunanidhi was an astute politician who won every election he contested and provided leadership to his party for nearly fifty years.”

Shri Naidu recalled that Karunanidhi was a gifted orator who could hold an audience spellbound with his wit, literary flavour and learned expositions. “He was an outstanding legislator who excelled in the art of constructive political debate,” the Vice President said. He added that Karunanidhi had an artistic, cultural and journalistic flair that earned him the honorific title of ‘Kalaignar.’ Shri Naidu described Karunanidhi as a “multifaceted personality who has left an indelible impression on the development canvas of Tamil Nadu.”

Shri Naidu observed that Karunanidhi’s multi-dimensional work has had a lasting impact on the socio-political landscape of Tamil Nadu. He added, “through his scripts and dialogues, Kalaignar Karunanidhi blazed a new trail in Tamil cinema. As an insightful commentator on current affairs and political analyst, Kalaignar wielded a powerful pen, writing extensively in Murasoli, the party publication he founded.”

The Vice President remarked that if there is one common strand which runs through the work of Kalaignar Karunanidhi the administrator, the social activist, the political reformer, the script writer, the poet, the playwright, the journalist and the author, it is that of social equality and inclusive development.

The Vice President recalled that Kalaignar Karunanidhi was a great champion of Tamil Nadu’s rich cultural heritage, Tamil language and literature. Shri Naidu described Karunanidhi as a leader who loved his motherland and mother tongue and helped the world know about the state’s wealth of cultural heritage and the literary works in the classical language of Tamil. The Vice President pointed out that “it was Kalaignar who declared the prayer song for Tamil Nadu in 1970, the ‘Tamil Thai Vazhthu’ with which we begin all functions in the State.”

On this occasion, the Vice President also called for promoting and propagating one’s mother tongue. Reiterating that there should be no imposition of or no opposition to any language, he wanted India’s rich cultural and linguistic diversity to be preserved. “Unity in diversity is a unique feature of Indian culture,” he stressed.

Shri Naidu expressed the hope that Tamil Nadu would make rapid progress on all fronts and, working with the Union government in the true spirit of ‘cooperative federalism’ and ‘competitive federalism’, make India realise its true potential in the years to come. He added that he also hoped that the current Chief Minister, M.K. Stalin would be guided by the vision and work of his illustrious father, Kalaignar Karunanidhi.