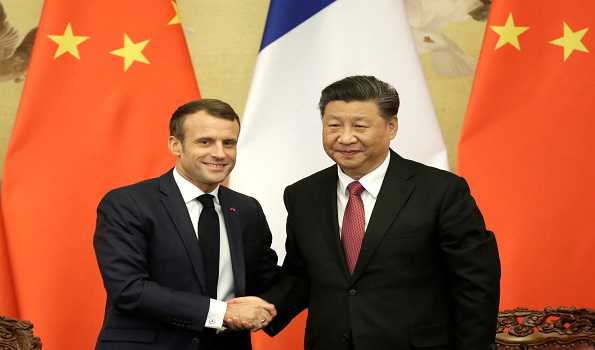 Beijing, Nov 6 (UNI) Chinese President Xi Jinping and French President Emmanuel Macron on Wednesday reaffirmed their support to the ‘irreversible’ Paris Agreement on climate change, after the US withdrew from the accord this week.

After a joint news conference at the Great Hall of People here, the two leaders maintained their strong commitment to improving international cooperation on climate change, Euronews reported.

In his speech, President Macron did not specifically mention the United States, but said he “deplores” the decision by “some other” countries to withdraw.

Earlier in the day, Xi and his wife Peng Liyuan greeted Macron and his wife Brigitte at the entrance to the Great Hall of People, near Tiananmen Square.

The French president is visiting China for the second time since he took office.

The United States administration has already filed paperwork to withdraw from the Paris Agreement on combating climate change.

The US move is the first formal step in a one-year process to exit the global pact, part of a broader strategy by President Donald Trump to reduce regulation of American industry.

During this year’s G20 summit, China and France pledged to ‘update” their contributions against climate change beyond their current ones to reflect ‘their highest possible ambition.’