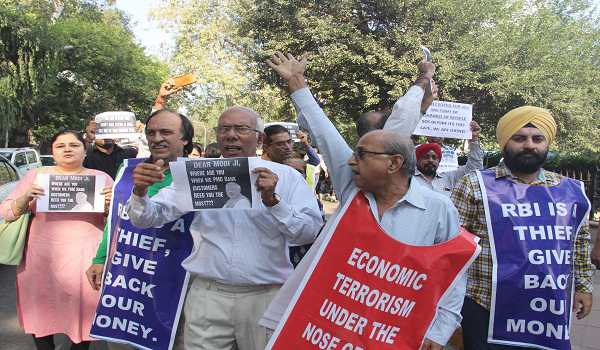 New Delhi, Nov 6 (UNI) The Punjab and Maharashtra Cooperative (PMC) Bank customers on Wednesday took out a protest march against the Reserve bank of India in the National capital.

A group of PMC customers began their protest march from Patel Chowk metro station to RBI building here in a bid to gherao it. Holding placards and banners, the PMC Bank fraud victims were raising slogans against the government and the apex bank.

Demanding a return of their money, the PMC bank fraud victims called for an intervention of the Government into the matter.

While talking to UNI during their march, one of customers said, “We want our money back. It was our hard earned money. We request the government to intervene into it.”

In a major relief to depositors, the Reserve Bank of India (RBI) on Tuesday enhanced the withdrawal limit to Rs 50,000. Earlier, it had put a cap to Rs 40,000.

On September 23, the RBI had barred the bank from carrying out any operations for the next six months.

The central bank’s action came after it found certain irregularities in the bank, including under-reporting of non-performing assets (NPAs) and large deposit withdrawals.