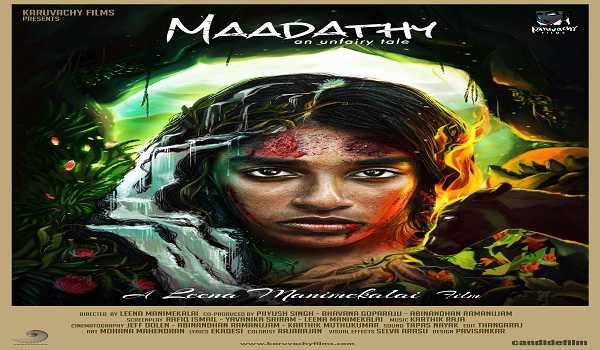 The movie poster was launched during its world premiere at the prestigious film festival.

The film is a tale about a young girl who grew up in an oppressed caste, the ‘unseeables’ and how she refused to be defined by her birth identity and came to be immortalised as their local deity, Maadathy.

The film reflects on caste, gender, violence, faith that are embedded in the culture and adapts a style that makes it a contemporary fairy tale.

Directed by filmmaker Leena Manimekalai, this feature film is a mix of drama and mystery.
Co-Producer Abhayanand Singh said, “It is such a honour for us that Mr AR Rahman unveiled the first look poster of Maadathy at Busan International Film Festival. We are truly delighted that the movie had world premiere screening at this prestigious film festival. It is a story that has been beautifully captured by Leena that depicts the struggles of an oppressed community. We are looking forward that the story of Maadathy reaches every nook and corner of the country and generates the awareness of the same.’

Director, Leena Manimekalai said, ‘Busan is a fabulous beginning for us. So much love and respect showered upon us reassures our faith in meaningful cinema. It was such a honour for the entire crew,cast, my people in Tirunelveli Papanasam-VKPuram-Anavan Kudiyiruppu village people who participated in the film, my crowd funders and my co-producers to have our beloved composer A.R.Rahman launch our first look poster. His gesture has enabled Maadathy open a wider discourse on the urgent matters of gender and caste that divides humanity.’

Busan International Film Festival is a renowned platform for films to engage with its audience on a wider scale.

Providing spotlight to emerging directors and producers, BIFF is the ideal platform for ‘Maadathy’ to cater to a larger audience. With a cast of commendable artists like Ajmina Kasim, Patrick Raj, Semmalar Annam, Arul Kumar, and others, the film was screened at BIFF 2019 in Haeundae-gu, Busan, South Korea. (UNI)