India with Brazil, Germany and Japan bat for berths as permanent members in UNSC 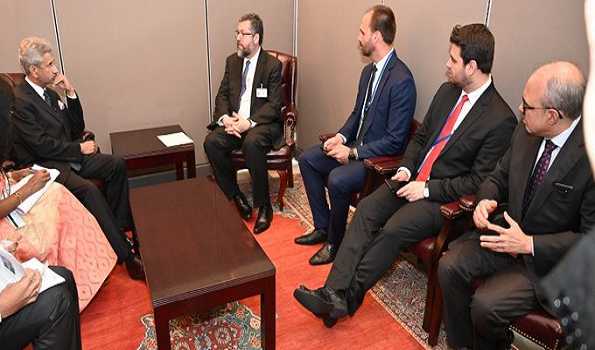 India along with Brazil, Germany and Japan have made a strong pitch for berths as permanent members in the reformed United Nations Security Council.

“The Ministers (of these four countries) reiterated their support for each other’s candidatures as aspiring new permanent members in a reformed Security Council given the capacity and willingness to take on major responsibilities with regard to the maintenance of international peace and security,”

a Joint Statement said at the end of Foreign Ministers of the G4 countries said.

“There is a clear need for an enhanced role of developing countries and of major contributors to the United Nations to make the Council more legitimate, effective and representative,” the statement said.

The meeting was attended by Dr Jaishankar and his three counterparts Ernesto Araujo (Brazil), Heiko Maas (Germany) and Toshimitsu Motegi.

The meeting was held on the sidelines of the United Nations General Assembly here.

“The G-4 Ministers reiterated their strong commitment to an early and comprehensive reform of the Security Council, as envisaged by Heads of State and Government in the 2005 World Summit. They highlighted the importance of efforts aimed at reforming the United Nations and updating its main decision-making bodies, in order to better reflect the contemporary realities,” the statement said.

The Ministers also emphasized that an expansion of the Security Council in both categories is “indispensable” to make this body more representative, legitimate and effective, enhancing therefore its capacity to deal with the complex challenges the world faces today.

Bearing in mind that in 2020 the United Nations will celebrate its 75th anniversary, the G4 Ministers expressed their firm hope that the current session of the General Assembly will pave the way for finally moving on the call for an ‘early reform’ of the Security Council, that was made in the 2005 World Summit by all the Heads of State and Government.

“This reform should include not only the expansion of both permanent and non-permanent categories of membership, but also measures to increase the transparency and effectiveness of the work of the Security Council,” it said.

The G4 nations comprising Brazil, Germany, India and Japan are four countries which support each other’s bids for permanent seats on the United Nations Security Council.

The Ministers also underscored their “steadfast support” for Africa’s representation in both the permanent and non-permanent categories of membership of a reformed and expanded Security Council.

Dr Jaishankar also held a meeting with counterparts from Brazil and South Africa in the IBSA format.

“At a time of significant and pressing global challenges, India, Brazil and South Africa acknowledge our common objectives and shared responsibility to help build a peaceful, secure and prosperous world. The right to development and equality of opportunities are critical means to achieve such goals,” the Joint Statement by IBSA leaders said.

“As large democracies and vibrant nations, we believe that people should be placed at the centre of inclusive international governance. We are committed to reforming the multilateral system in order to meet the needs and expectations of our peoples, as well as to respond to increasing global challenges,” it said.