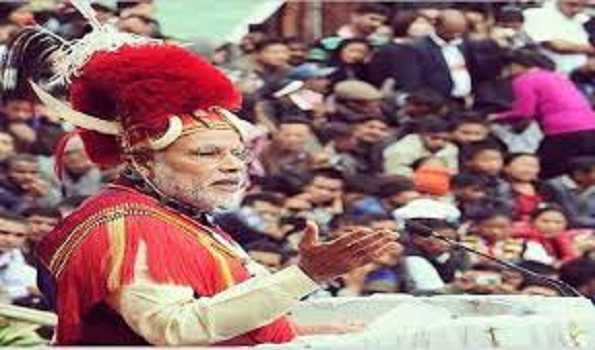 The last rounds of peace parleys between the Naga militant group NSCN (IM) and the government of India continue to hit the roadblocks.

Amid major hiccups over demand for separate flag and constitution as articulated by the outfit, which is in talks with the government since 1997, the fear of ethnic conflicts have surfaced as the NSCN (IM) has alleged a rival group of imparting guerilla warfare training to the Kukis.

There are also reports that some NSCN (I-M) cadres have ‘deserted’ their camps, but the claim is denied outright.

It may be recalled that on October 25, a senior NSCN (I-M) leader Hukavi Yeputhomi announced his decision to quit the organisation and join a rival group along with 16 other colleagues.These developments do not augur well for ‘peace’ in the state and in adjoining Manipur, sources said.

Meanwhile, last two rounds of talks on Monday and Tuesday between NSCN (IM) and government interlocutor and Nagaland Governor R N Ravi did not yield any positive outcome.

Nevertheless, both sides remained ‘serious’ on resolving the disputes through talks.”There was little progress over the differences on flag and constitution, but talks will continue even on Wednesday.

The government is keen to wrap up the negotiations by October 31 as desired by Prime Minister Narendra Modi,” a source said.

“Some more rounds of talks may take place on Wednesday and even on Thursday,” the source maintained.

However, there was ‘progress’ in Governor R N Ravi’s separate talks with an umbrella organisation of other Naga militant groups NNPG – which has expressed ‘keenness’ to end the prolonged dialogues and herald lasting peace.

The government side has indicated to the Naga groups that once a ‘solution’ is worked out, any pending issue can be taken up at a later stage through democratic process.

“The entire Naga issue cannot be held hostage to either guns or to the twin demands of separate flag and constitution,” the source said. The government has indicated that provisions of Article 371 (A) which guarantees protection and safe guard of local culture and interest would be ‘further strengthened’.

The Nagas in Nagaland and those residing in Manipur could be provided with a good economic package and efforts will be made to ensure that all Naga ethnic groups get a better and enhanced roles in the developmental process.

In view of government’s decision to abrogate Article 370 in Jammu and Kashmir, replying to the debate, Union Home Minister Amit Shah has told Lok Sabha on August 6 that the Modi government had no intention to revoke or dilute provisions of Article 371 (A).