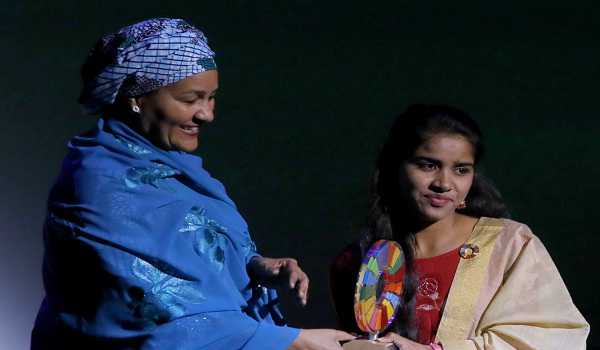 Seventeen-year-old girl from Rajasthan’s village Payal Jangid has been felicitated with the Changemaker Award at the Goalkeepers Global Goals Awards 2019 in New York, US.

The youth activist was on Wednesday honored with the prestigious Changemaker Award by the Bill and Melinda Gates Foundation at the Goalkeepers Global Goals Awards held in New York.

This award has been conferred upon her in recognition of her work done towards the abolition of child marriage in her village, Hinsla and other neighbouring villages, said a statement from Kailash Satyarthi Children’s Foundation.

She received the honour in New York at the Goalkeepers Global Goals Awards 2019 ceremony where subsequently Prime Minister Narendra Modi was also conferred with the ‘Global Goalkeeper’ award.

Payal, who is one of many torchbearers of Nobel Laureate Kailash Satyarthi’s legacy and who lives in a Child-Friendly Village (Bal Mitra Gram) situated in the desert state of Rajasthan, expressed her happiness over this global recognition, she said.

‘I extend my deepest gratitude to my mentors, Kailash Satyarthi and Sumedha Kailash for giving me an opportunity to work towards the promotion of child rights. It is because of them that I have been able to raise my voice against the social evil of child marriage and stopped my own marriage,’ said Payal, adding that this recognition will further encourage me to continue my fight to end all forms of exploitation of children.

Payal, as the President of her village’s Children’s Parliament (Bal Panchayat), has undertaken a slew of field activities in the past to empower women and children of her own village and villages nearby. Her parents decided to marry her when she was only 11-year-old, she raised her voice against the same, as a result, her parents relented and the marriage was prevented.

Thus began her campaign against child marriages in her village and the adjoining areas. She planned rallies, organised protests, and engaged with various women’s groups and youth forums of her village and surrounding villages. (UNI)