We are committed to far-reaching changes in our defence preparedness: Rajnath 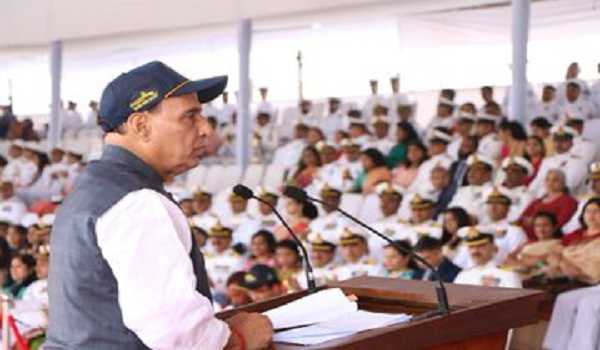 Defence Minister Rajnath Singh on Saturday said the government is deeply conscious of the requirements of the Armed Forces, and is committed to far-reaching changes in the defence preparedness.

Mr Singh was addressing at the Commissioning Ceremony of indigenously built submarine INS Khanderi in Mumbai. ‘The government remains committed in providing requisite focus and financial support for its modernisation,’ he said.

‘Due impetus has been given for timely acquisition of state-of-the-art weapons, sensors and platforms, and the Government has given more freedom and support to armed forces to take decisions in the nation’s interest,’ he said.

Mr Singh urged not just the security forces, but every citizen of the country to stay alert and united to meet any future challenges. ‘We have to be on the guard against state and non-state actors from across the border,’ he said.

Underlining the importance of Oceans in development trajectory of a nation, the Raksha Mantri said, oceans are gateway of opportunities as well as grave threats if the maritime forces are not alert. He said, the Indian Navy should be the last men standing in the Indian Ocean Region.

‘We need to safeguard the sea lanes of Indian Ocean to maintain and promote peace & trade in the region. We care about the Indian Ocean & we will take strong action if anyone tries to disturb the peace,’ he said.

“The nation can never forget the exceptional role it played in 1971 war when Operation Trident and Operation Python broke the backbone of Pakistan Navy. Pakistan should understand that today with the Government’s strong resolve and advancement in naval capacity with additions like INS Khanderi, India is capable of giving a much bigger blow to it,’ Mr Singh said.

He said, during the recent visit of Prime Minister Narendra Modi to the US, President Donald Trump acknowledged the potential of the Indian Government and was of the view that Mr Modi is capable of handling Pakistan-based terrorism.

The Raksha Mantri assured the Indian Navy will not pose any threat to any peace-loving nation but will build a sense of confidence and mutual trust with all big-small nations in the Indian Ocean Region.

‘Security and Growth for All in the Region (SAGAR), saying that Mr Modi articulated it keeping up with India’s collaborative approach in the wider Indian Ocean Region. We believe in peaceful and mutually beneficial co-existence with our neighbours,’ he said.

The Raksha Mantri added protected sea lanes have a positive impact on trade.

Describing INS Khanderi as a ‘potent combatant’, Mr Singh congratulated the Navy and the Western Naval Command on its induction and for achieving very high levels of operational preparedness prior its commissioning.

He said it is a matter of great pride that India is one of the few countries capable of constructing their own Submarine. The Raksha Mantri said construction of submarines not only benefits the industry, but also helps evolve a positive culture of stringent quality control and complex engineering.

‘It brings plough-back benefits for the economy of the nation at large with significant contributions towards ‘Make in India,’ he said.  Singh termed the commissioning of INS Khanderi as yet another significant and historic step in showcasing the will and intent of the Government.

‘The name Khanderi is inspired by the dreaded ‘Sword Tooth Fish’ a deadly fish known to hunt whilst swimming close to the bottom of the ocean. Khanderi is also name of an island fort built by great Maratha ruler Chhatrapati Shivaji Maharaj. He was man of great valour, courage and determination. He was one of the first Indian ruler in medieval era to recognise importance of strong Navy. Commissioning of INS Khanderi will bring same valour and sharpness back on sea,’ Mr Singh said.

INS Khanderi is the second of Kalvari Class diesel electric attack submarines of the Indian Navy. It has been built in India to the French Scorpene design and is the second submarine of the Project-75. Built indigenously by Mazagon Dock Shipbuilders Limited, INS Khanderi is a lethal addition to Navy’s conventional submarine arsenal and is designed for silent and stealthy sub-surface operations.  (UNI)