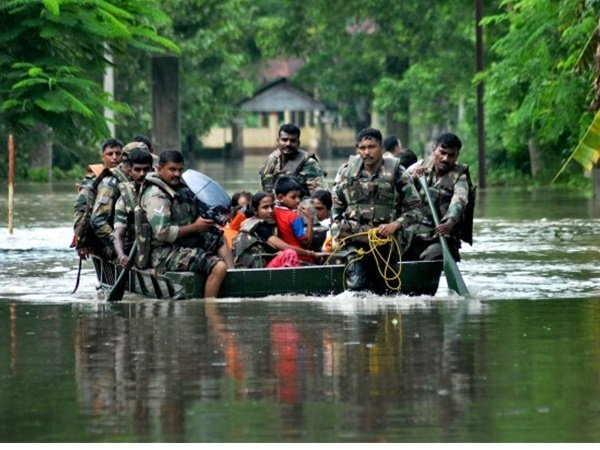 Arguably the most developed and progressive state in India, Kerala suffered its worst crisis in its known history last month. More than 300 people lost their lives and lakhs were rendered homeless due to a devastating flood not seen in the state since 1924. Properties worth an estimated Rs.20,000 crore were destroyed.

Though the floods left a trail of destruction, they also brought out the best of humanity among the people, who showed rare resilience, camaraderie and resolve to rebuild the state. The ruling Leftist government headed by Pinarayi Vijayan as well as the opposition parties worked together to provide assistance to flood affected people. The civil society groups formed a vast network on social media to update Malayalis working across the globe on the situation back home, seek relief and ensure that it reached the people at the ground.

As the floods wrecked havoc on the lives of people, the state was also flooded with help from all quarters. It received financial assistance and relief from all major states in the country as well as the central government. Volunteers from across the country rushed to Kerala to help the marooned people.

But at the same time, amidst the misery of the people, many, including political and religious leaders, and even celebrities, were insensitive enough to comment on the social media that the floods were the wrath of God because “people in Kerala ate beef” or because “women were allowed entry” to a certain temple. Some went to the extent of saying that people should not donate to Kerala flood affords because Muslims and Christians comprised almost a half of the state’s population!

The insanity was heightened after the United Arab Emirates, which has a sizable workforce of Malayalis, offered financial help. The chief minister quoted a specific amount of Rs.700 crore to be supposedly given by the Arab country. It evidently did not go down well with the BJP supporters who felt that the Leftist chief minister was intentionally embarrassing the central government, which till that time had committed Rs.600 crore. They started a slander campaign against Vijayan calling him a “liar”.

The generous gesture of UAE’s also came under a cloud with BJP supporters questioning its intention as “business proposal”. They asked why UAE never came forward to help floods in Uttarakhand or cyclone in Odisha. The controversy continued even after the ambassador of UAE went on record saying that there was no official announcement on the quantum of financial assistance as the assessment of relief needed was on and the central government said that India did not accept foreign funds during disasters.

The controversy was simply unwarranted because it was well known that UAE shared a special bond with Kerala as a large number of people from the state lived in the Arabian country. But when its offer triggered a row, UAE did not want to be involved in India’s internal matter and issued the clarification through its ambassador about not yet deciding on the specific amount to be given.

In a recent interview, Vijayan reiterated that he did not bluff about the specific amount of UAE’s assistance. As he had attributed the information to Yusuff Ali, the owner of Lulu International, Middle East’s biggest hyper market chain, there was no reason not to believe it. Ali yields a lot of clout in the UAE’s rulers and it is quite possible that the latter had unofficially informed the businessman, who hails from Kerala, about the quantum of the assistance that would have been routed through the central government officially.

Anyway, the obscene campaign against Vijayan and people of Kerala by narrow minded element had a positive result. Kerala received record amount of donations from across the country and abroad. The Kerala chief minister’s relief fund alone got over Rs.1,000 crore.

This proved that a majority of people of the country are beyond religious, ethnic and caste divides. They poured in with help because they had seen the people of Kerala working together to provide relief to flood affected people by converting temples, mosques and churches to relief camps, truck drivers rushing in relief materials wading through flooded roads, fishermen collectives rescuing hundreds of men, women and children from marooned areas, and MLAs serving food to victims in relief camps.

In the aftermath of the floods, the government, civil society groups and volunteers have now moved to the next step planning for rehabilitation and rebuilding. Kerala indeed reflects the idea of India.