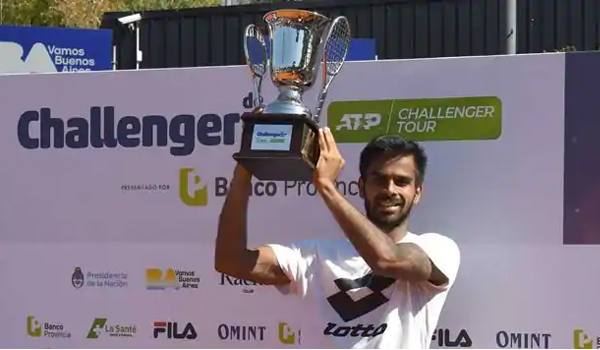 Buenos Aires got a new champion in Sumit Nagal of India. Giving a consistent performance in the tournament 22-year old and 161st ranked Sumit Nagal of India wrote his name as winner by claiming his first ATP Challeger trophy by defeating left handed eighth seed Faucundo Bagnis of Argentina, ranked 166th, in straight set by 6-4, 6-2 in the final of the the $54,160 Buenos Aires ATP Challenger in Argentina on Sunday.
Remaining cool and composer throughout the match, Sumit Nagal, who recently earned recognition by qualifying for US Open main draw where he was pitted against tennis icon Roger Federer, got his first ATP title today. His first Grand Slam entrance in US Open has given him more confidence and experience as he was able to take the first set against Roger before losing.
Today his final against Bagnis lasted one hour and 40 minutes. Bagins served seven aces in comparision to two by Sumit. Bagnis and Nagal committed three double faults each.
The Indian player came to Buenos Aires without his coach. Sumit is planning to secure more points which will pave his way to move up.
On Red Clay surface, Nagal served well and kept his first service 73 per cent in in comparison to 57 by Bagnis. Nagal saved both break points and won three out of nine break points while the Argentinian player saved six out of nine break points but could not win any of the two break points. Nagal won 81 per cent points (30/37) on his first service and 64 per cent points (9/14) on his second service.
Bagins won 62 per cent points (29/47) on his first service and 44 per cent points (16/36) on his scond service. He won total 57 points while Nagal secured total 77 points.
Sumit Nagal earned $7200 and 80 ATP points while Bagins got $4240 and 49 points.
Top seed Argentinian duo of Guido Andreozzi and Andres Molteni defeat four seeds Hugo Dellient and Federico Zeballos of Bollivia 6-7 (3), 6-2, 10-1 in the doubles final in one hour and 17 minutes.