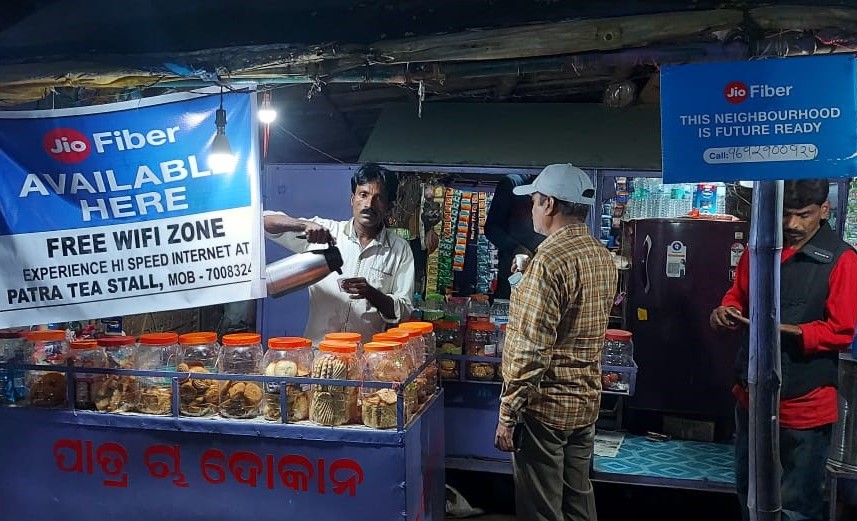 Bhubaneswar : In today’s era, consistent high-speed internet has become a necessity for almost everyone, be it a student or a working professional or an elderly person using it for watching favourite news and entertainment programmes. With the anvil of Jio Fiber, the fastest and popular high-speed broadband service offered by Reliance Jio, affordable high-speed broadband connectivity has fueled several success stories across over 27 cities and towns in Odisha.

When JioFiber high speed broadband services commenced in Sundargarh town, it was a pleasant surprise for the team when they received Alok’s request for installation of JioFiber connection at his tea stall on the main road. But, Alok had a very clear understanding from the beginning that consistent high-speed broadband internet connectivity will help him grow his business much faster as he strongly believed that happy customers are key to growth.

Now, equipped with high-speed JioFIber connection, Alok has made his tea stall a free WiFi zone for his customers and provides his customers free hi-speed internet access. When asked about how it helped his business, an elated Alok says he is very much thankful to JioFiber as the free Wi-Fi service at his shop has made his customers super happy and became the talk of the town in no time, resulting in increase in footfall as well as significant increase in his business. Also, because of the high-speed internet connectivity, many of his regular customers now spending longer time at his shop, which helps his business too.

Like Patra Tea Stall in Sundargarh, several small enterprises, traders, entrepreneurs, educational institutions, working professionals and students in cities and towns across Odisha have benefited from JioFiber high-speed broadband service and have switched to the digital mode in tune to the demand and aspirations of their respective businesses and professions.

It is worth mentioning here that JioFiber has rapidly expanded its service to major areas and localitiesin 27 cities and towns across Odisha and is fast expanding its service to other cities andtowns. As per the latest telecom subscriber data released by Telecom Regulatory Authority of India (TRAI), JioFiber has over 76000 subscribers in Odisha as on 31st August 2021.