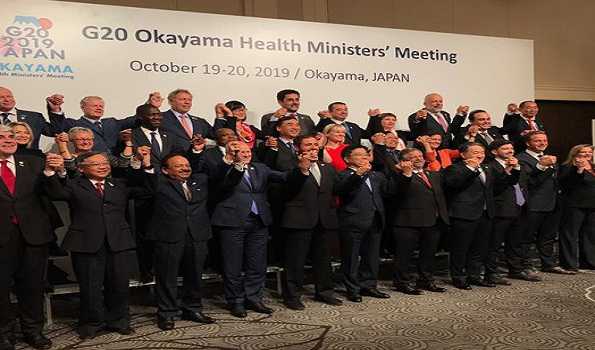 The deliberations of the G 20 Health Ministers focused on four major global health issues, like achievement of universal health coverage, response to population aging, management of health risks and health security management including anti-microbial resistance and its containment.

The Union Health Minister made specific interventions on all of them.

The Minister confided that India is on the path to UHC and will contribute effectively in sustaining UHC at the global level.

On “Response to Population Aging” Dr Vardhan, during his intervention, shared India’s vision for its projected 20 per cent elderly population by 2050, an official statement here said.

He conveyed to G20 countries the efforts done so far under National Programme for Health Care of Elderly to provide accessible, affordable, and high-quality long-term, comprehensive health care services to an ageing population. In his intervention he also made a mention of public health measures to tackle Dementia.

Dr Vardhan concluded his intervention by highlighting India’s commitment to ensure dignity with care for its elderly.

Deliberating on Health risk and health security, he made intervention on Anti-Microbial Resistance (AMR), seen as a serious emerging threat to global public health. He conveyed G20 Health Ministers that in a short span of time India has made commendable progress by implementing a national action plan, establishing a national antimicrobial resistance surveillance system, and its decision to contribute to global AMR R&D efforts.

While voicing his concern on AMR, he called upon all relevant UN agencies to align themselves in their endeavour to combat antimicrobial resistance.

During the Simulation Exercise on “Public Health Emergency during mass gathering” on Sunday, the Minister shared two best practices– successful pulse polio campaign in Delhi in 1994 threatened by a major outbreak of Plague during the same period and the risk communication management to bring down the mass hysteria created by Social media during Nipah outbreak in Kerala in 2018.

The G20 Health Ministers meeting concluded by adopting the “Okayama Declaration of the G 20 Health Ministers”. The declaration, having 52 articles endorses the Commitment of G20 countries to address the major global health issues, as highlighted above and to pave the way towards an inclusive and sustainable world, as envisioned in the 2030 agenda for sustainable development. Further, G20 members have committed to continue this dialogue during the upcoming G20 presidency in Saudi Arabia.

This opportunity was also utilized to have bi-lateral meetings with Italy, Singapore, United Kingdom and the US. Dr Vardhan met Mr. Robert Speranza, Minister for Health, Government of Italy and his delegation. Both Ministers mutually agreed for sharing experiences and best practices on Universal Health Coverage, AMR and research in health sector. Italy also showed its interest in collaborating with India in Pharma sector. India invited Italy to join Global Digital Health Partnership.

Dr Vardhan also met Ms. Nicola Blackwood, Parliamentary Under Secretary of State, United Kingdom on the sidelines of G 20 Health Minister’s Summit. Both Ministers discussed in brief about progress of India-UK Collaboration in the field of health care. Both agreed to take forward agenda on AMR, Digital Health and Genomics. Union Minister for Health and Family Welfare invited UK delegation to India under the aegis of India-UK Collaboration.  (UNI)