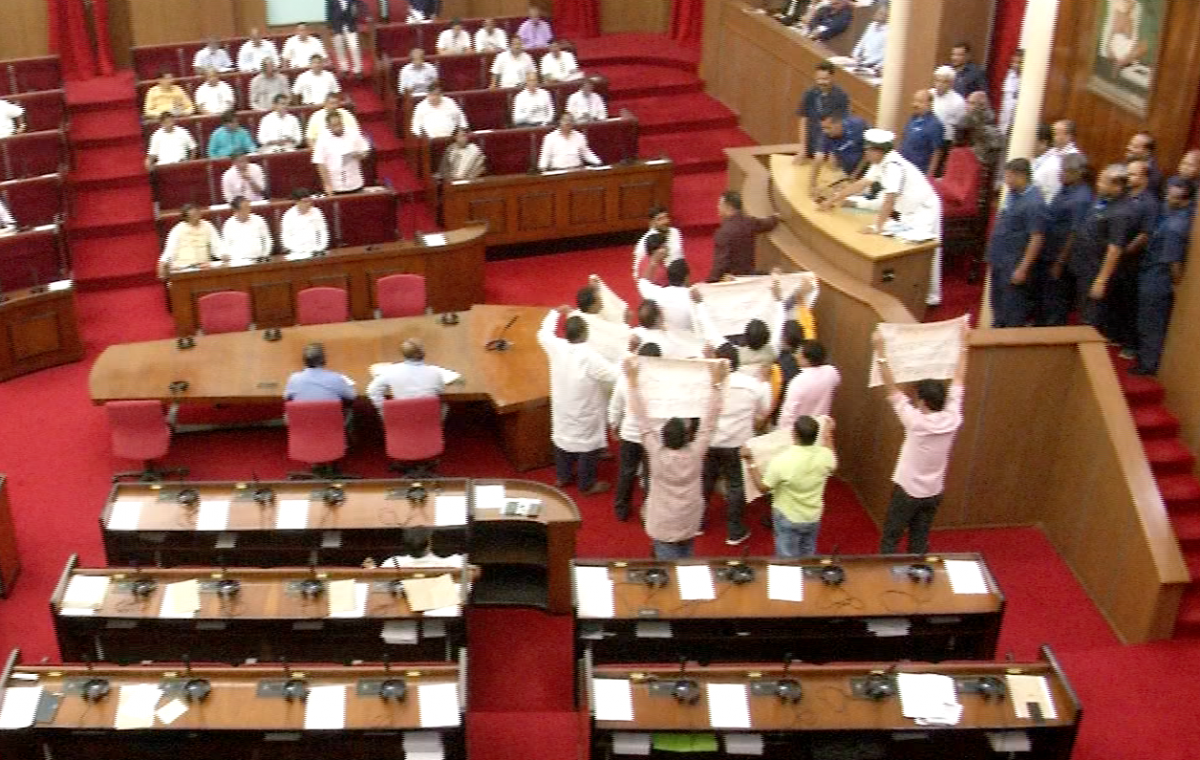 Bhubaneswar, Nov 14 (UNI) The Congress members today staged a noisy walk out demanding either a CBI inquiry or a probe by court monitored Special Investigative Team (SIT) in to the mysterious death of Haridaspur Panchayat Executive Officer Smitarani on October 16 last. The  Congress legislators  walked out of the  house  as Minister of state for Home Dibya Shankar Mishra did not utter a word on their demand while replying to the debate on the admissibility of an adjournment motion on Smitarani’s deatth, Participating in the  debate  Congress legislature  party leader Narashingha Mishra   accused the government of trying to suppress the case as leaders  and workers of the ruling BJD were involved in the case.

He said the state Police was capable of inquiring into the incident and unravel the truth but they were not impartially inquiring  into the case  under the pressure of the government. The Congress leader said  there was injuries marks on the body of Smitarani which indicated that she was murdered and she has not committed suicide. He demanded for the analysis of the post mortem report by experts. Mr Mishra asked why the Enforcement Directorate (ED) was not inquiring into property of Rupesh Bhadra, the husband of the Haridaspur Sarpanch who has been arrested by the police in connection with the murder.

The ED, he said should inquire how Rupesh, a small tea shop owner became so  rich and illegally constructed a guest house on the government land. Mr Mishra  also alleged that  both the BJP and the BJD  were hand in glove and did not want a discussion on the issue. He said  though the BJP like the Congress party demanded a CBI inquiry into the case  but the members instead of participating  in the discussion, disrupted  the proceedings by shouting slogans.

Throughout the discussion of the adjournment motion, the BJP members carrying placards  shouted slogans inside the wellof the house,thumped the Speakers table, clapped and tried to snatch papers and microphone from the Speaker’s table demanding a CBI probe into the case. Mr.Mishra was supported by his party colleagues Suresh Routray, Santosh Singh Saluja, Adhiraj Mohan Panigrahi and  Tara Prasad Bahinipati.

However, Minister of State for Home Dibya Shankar Mishra said the state government was committed to the security and safety of the women. He said Smitarani was found hanging in the guest house of the  Rupesh Bhadra, the husband of Haridaspur Sarpancha on October 16 last. On the basis of the FIR filed by  the deceased  father an UD case was filed and systematic and scientific inquiry was conducted.During the investigation inquest was conducted in the presence of Executive Magistrate and witnesses.

The post mortem was conducted by a team of doctors on October 17 last  and the entire process was videographed. The doctors were of view that Smitarani’s death was caused by asphyxiation due to hanging. The crux of the post mortem report was that the cause of the death could be due to suicide. After the postmortem, the body was handed over to the family members of the deceased, the  minister said.

He said on the basis of the reports of inquiring officers a case was registered u/s 306 of the IPC and Rupesh Bhadra was arrested and forwarded to court after ample evidence was found against him in the case. The accused is in jail now and further investigation is on, the Minister said. Participating in the debate the treasury bench members-Amar Prasad Satpathy, Prafulla Samal, Pramila Mallik criticized  the BJP members  for  trying to  take political mileage on the issue. It was just a publicity stunt and they have no concern for the women, they said. The treasury bench members  said there was no need for a CBI probe as the state Police is  well capable of inquiring into the incident.