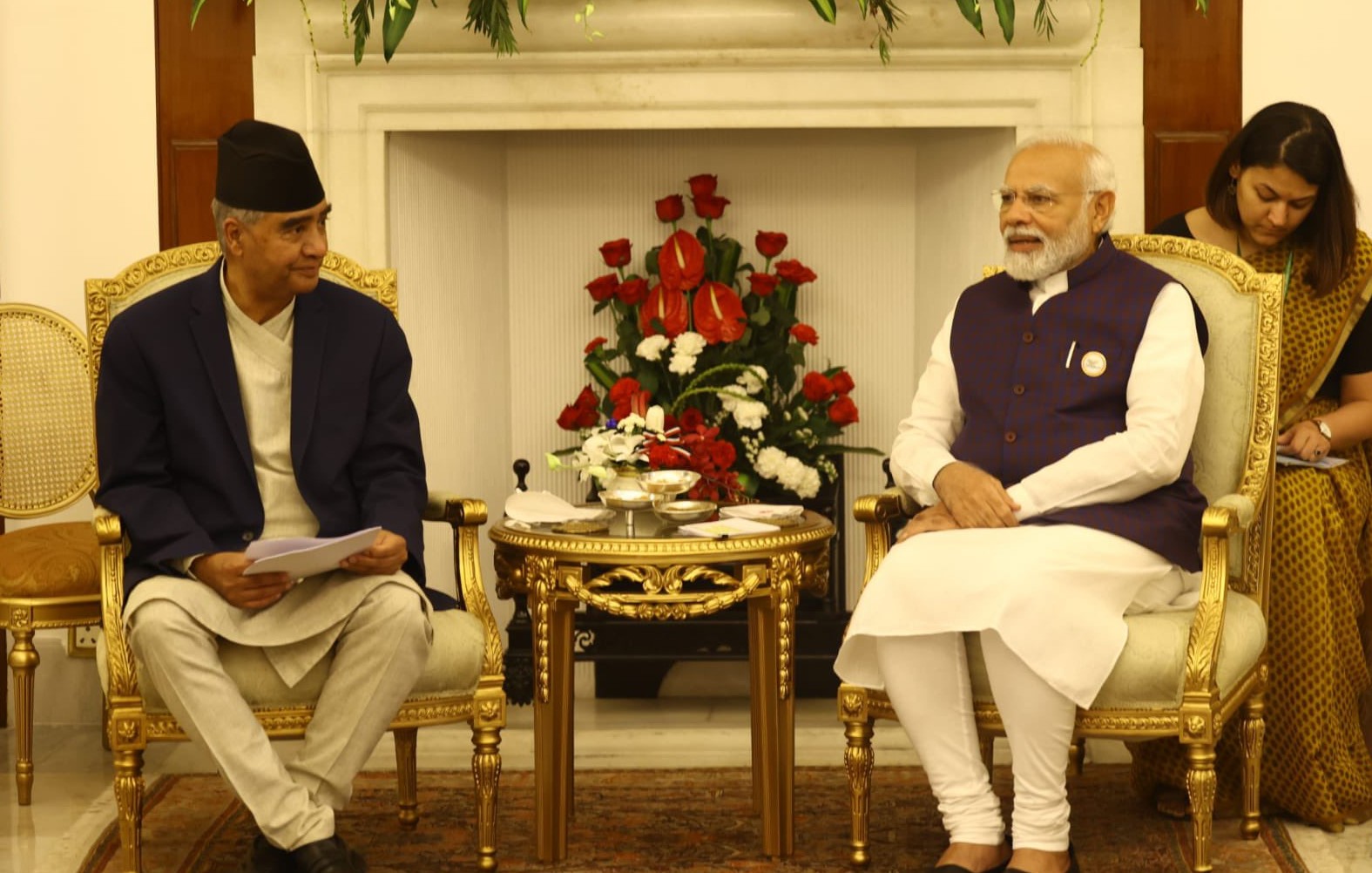 New Delhi: Prime Minister Narendra Modi held delegation-level talks with his Nepalese counterpart Sher Bahadur Deuba in New Delhi today. During this, both the leaders reviewed the progress in partnership between the two countries and discussed ways to further the India-Nepal cooperation agenda.

Later Prime Minister Narendra Modi and Nepalese Prime Minister Bahadur Deuba jointly launched several projects. They flagged off the 35-kilometer long cross-border passenger train services between Jaynagar of Bihar in India and Kurtha in Nepal. They also jointly inaugurated Solu Corridor 132 KV Power Transmission Line and Substation in Nepal built under Governemnt of India’s Line of Credit. The two Prime Ministers launched RuPay Card in Nepal. After that four MoUs were signed in the presence of both Prime Ministers.

In his address at the joint press conference, Prime Minister Narendra Modi said that it is the fifth visit of Deuba to India as a Prime Minister who have played a key role in the development of relationship between the two countries. He said, such an example of the friendship between these two countries and the mutual relations of our people is not seen anywhere else in the world.

Modi added that both sides also agreed to take benefit of the opportunities available in the power sector. He said, our Joint Vision Statement on Power Cooperation will prove to be a blueprint for future cooperation betwee Inda and Nepal. He emphasized the importance of moving ahead at a fast pace in the Pancheshwar project which will prove to be a game changer for the development of this area.

He mentioned that the Government of India also agreed on the subject of greater participation by Indian companies in Nepal’s hydropower development plans. Indian Prime Minister expressed happiness that Nepal has become a member of the International Solar Alliance and this will promote sustainable, affordable and clean energy in our region. Mr Modi mentioned that he and his Nepalese counterpart also agreed to give priority to trade and cross-border connectivity initiatives in all respects and the beginning of the Jayanagar-Kurtha rail line is a part of this. He said, such schemes would make a great contribution for smooth, hassle-free exchange of people between the two countries.

He also said that the introduction of RuPay card in Nepal will add a new chapter to our financial connectivity and the other projects like Nepal Police Academy, Integrated Check Post in Nepalganj and Ramayana Circuit will also bring the two countries closer. The Indian Prime Minister said that they also stressed on the need to further strengthen the cooperation between the defence and security institutions between the two countries.

In his address, Prime Minister of Nepal Sher Bahadur Deuba said that they had friendly talks and fruitful discussions on various aspects of India-Nepal relations. He said both sides shared perspectives on further strengthening the friendly ties between the two nations.