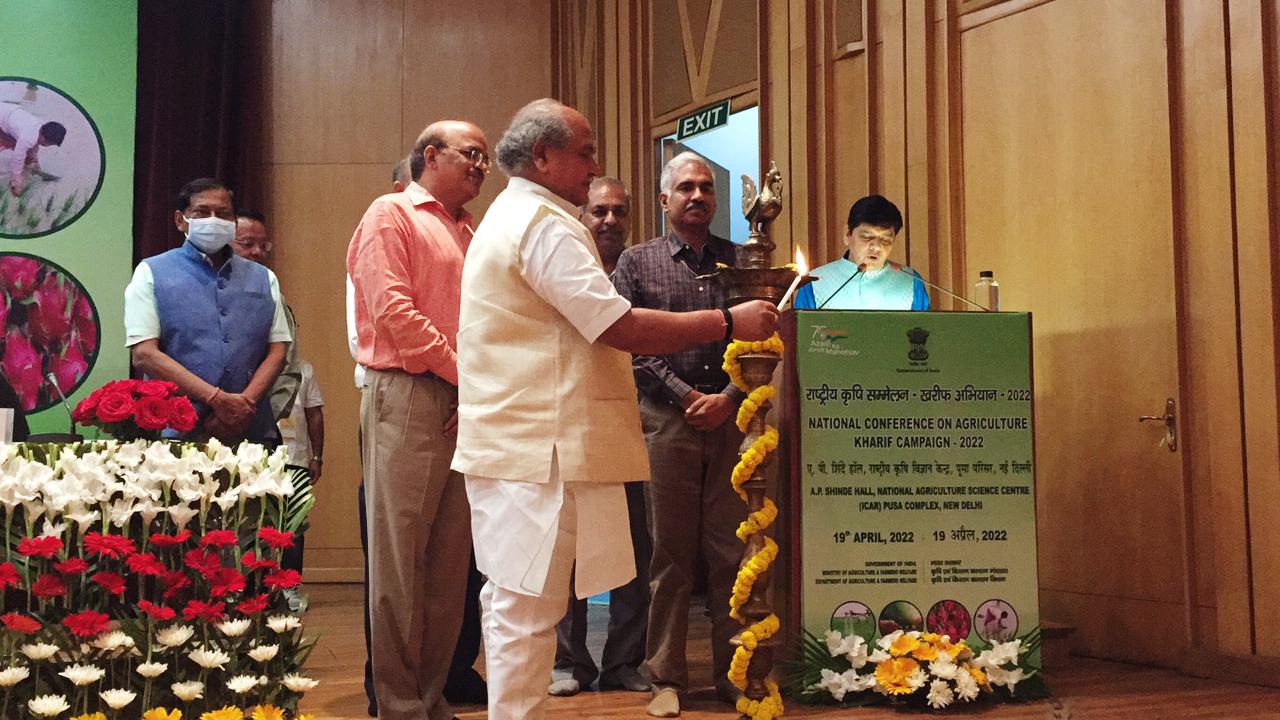 New Delhi: Union Agriculture Minister, Narendra Singhr Tomar inaugurated National Conference on Agriculture for Kharif Campaign 2022-23 today at NASC Complex, New Delhi. The Minister expressed satisfaction that that as per 2nd Advance Estimates (2021-22), total food grains production in the country is estimated at 3160 lakh tonnes which will be an all time record.

The pulses and oil seeds production will be 269.5 and 371.5 lakh tonnes, respectively. As per third advanced estimates, horticulture production during 2020-21 is 3310.5 lakh tonnes which is the highest ever for Indian horticulture. The Minister stated that the centre and states would work together to ensure pesticides and seeds availability to reduce input costs for farmers.

He urged that there should be a strategy to replace Urea with Nano-urea. He declared that the government would continue to lay emphasis on natural and organic farming. On exports the Minister said that while agriculture exports have increased, attention should be paid on quality prducts so that they can compete in International Markets. Exporters and farmers both should benefit.

The objective of this conference was to review and assess the crop performance during the preceding crop seasons and fix crop-wise targets for Kharif season in consultation with State Governments, ensure supply of critical inputs and facilitate adoption of innovative technologies with a view to enhance production and productivity of the crops.

The priority of government is agro-ecological based crop planning for diversion of land from excess commodities like rice and wheat. to deficit commodities like oilseeds and pulses and high value export earning crops. Government is giving high priority to Crop Diversification with focus on Self Sufficiency in Oilseeds & Pulses and Promotion of Oil Palm.

Consultations with all stake holders like major states, researchers, industries and policy makers have been held to finalize a National Policy Frame Work for Crop Diversification Programme in the country. All states should work towards crop diversification for making agriculture sustainable, profitable and self sufficient in deficit commodities.

He said, “We have to accelerate the production and productivity of agriculture and horticulture sectors for ensuring food and nutritional security in the rural areas. The Government has adopted several developmental programmes, schemes, reforms and policies that focus on higher incomes for the farmers. Action Plan for 3 years Seed Rolling Plan (2021-22 to 2023-24) for all oilseeds with allocation Rs 381.95 crore will produce a total of 14.7 lakh quintals of quality seed of new HYVs will be produced in next 3 years.”

Making a detailed presentation on the strategies for crop management in Kharif season, Dr. A. K. Singh, Agriculture Commissioner said that country has recorded all time high food grains, oilseeds and horticultural production due to timely interventions of the government.

Now, special focus is given on oilseeds, pulses and nutria-cereals. Post monsoon, rainfall has been in excess over normal and about 55.76 lakh hectares was under cultivation during summer. Following government policy, there has been reduction in area under rice with corresponding increase in pulses and oilseeds cultivation. Government has worked out requirement of seed and fertilizers and will ensure their timely supply. ( Click here for detailed Presentation)

Secretary (Fertilizers) deliberated on positioning of fertilizers supply for forthcoming season. Detailed presentations were made for new initiatives taken for increasing production of nutri-cereals and celebrating of International Year on Milles in 2023. Cafeteria Approach under RKVY and sub-schemes for farm mechanization were shared for the benefits of the states. Presentations were also given on Digital Agriculture, PM-Kisan and Natural Farming.

Additional Secretary (Agriculture) and senior officers from DA&FW, ICAR and officers of different State Governments participated in the National Conference. The states of Gujarat, Assam, Karnataka, Madhya Pradesh and Uttar Pradesh shared their progress. This was followed by an interaction session with Agriculture Production Commissioners and Principal Secretaries of all the States to raise issues concerning their states for increasing area coverage, production and productivity during Kharif season.