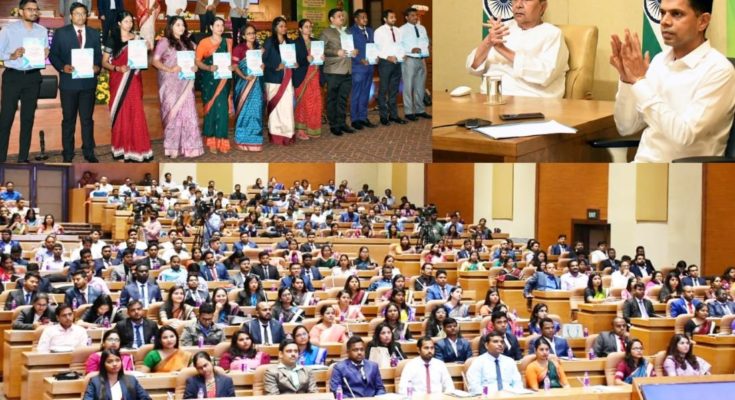 Odisha Civil Service Cadres: The development of Odisha has been the only objective of our government. Chief Minister Shri Naveen Patnaik today said this while addressing an orientation programme for the new Odisha Civil Services officers. He added, to achieve this goal, our government is working on transformation in every field under the principles of the 5T Charter that is Teamwork, Technology, Time, Transparency and Transformation.

As many as 378 young officers of 2020 Civil Services batch today joined in different civil service cadres of the State. An orientation for the new officers was held at State Convention Centre in Lok Seva Bhawan.

Welcoming the officers on virtual platform, the CM said, “Government service provides a unique opportunity to serve the general public and the weaker section of our society. People have great expectations and trust on you. I wish you will fulfill those aspirations.”

He further said, “A new Odisha, an empowered Odisha is possible with young, techno savvy and efficient officers like you in the Government, and I hope you all will shine in this test of public service. In a democracy, people are the ultimate masters and we all are here to serve them. I hope that you all will dedicate yourself to the noble cause of serving the people and fulfill their hopes and aspirations.”

Speaking on state’s initiatives, the CM said that our initiatives have resulted in visible transformation in a number of sectors. Our success in developing a robust disaster management infrastructure, turning Odisha a food surplus state from a food deficit state, making Odisha a global hotspot for international sporting events, reshaping Odisha economy and making it attractive for investors, and massive infrastructure drive have brought Odisha to leadership position among states.

He further added that we are a model welfare state. We are reaching out every vulnerable section, providing them economic justice, and making endeavor to bring them to mainstream. I believe that the empowerment of women can bring about the real transformation of the state.

Minister Finance, Parliamentary Affairs Shri Niranjan Pujari spoke that the state government is committed to the transformation of Odisha. The new officers should work towards strengthening the trust of people in the govt.

Revenue & Disaster Management Minister Smt Pramila Mallick said that the state government is making regular recruitments for different services. Even there has been recruitment for the pandemic year of 2020. Saying that OCS is a very dignified job, she called upon them to work towards fulfilling the mandate of their jobs.

Four new officers Kasturi Panda OAS, Bhanumati Sethi OFS, Anima Soren ORS, Soumya Ranjan Bhoi sharing their experiences said that they are happy to join the state civil services. The process, powered by the 5T initiative, has been completely automated, hassle-free and smooth. Anima Soren said that she is the only person from her panchayat to join civil service.

Secretary to CM (5T) Shri VK Pandian moderated the programme. Interacting with the new officers later, he explained the new recruits about the 5T principles and Mo Sarkar with several examples. He narrated how Odisha became a leader in disaster management. Shri Pandian further said that Mo Sarkar is a feedback system where the govt considers people as the real masters in a democracy.

Chief minister attaches maximum importance to people’s feedback. He advised the new officers that they can be a turning point in life of many people by bringing perceptible change among them. He also said that as they have been benefited from a transparent system of recruitment, they should repay the system by maintaining absolute transparency while serving people.