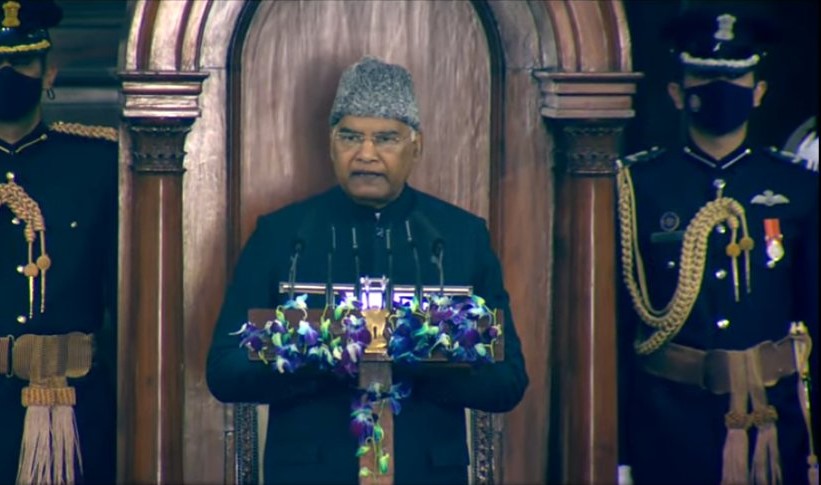 New Delhi: President Ram Nath Kovind has said that the government is moving fast on building a strong foundation for the next 25 years following the mantra of ‘Sabka Saath, Sabka Vikas, Sabka Vishwas, Aur Sabka Prayas’. He said, the most important resolution related to this foundation is the creation of inclusive and self-reliant India.

Addressing the joint sitting of both the Houses of Parliament today, the President lauded the various schemes and initiatives of the Government for the welfare of people. He said, India has once again become one of the fastest growing economies of the world due to relentless efforts of the Government. He said, India has attracted 48 billion dollar worth of investment in the first seven months of the current financial year and the global investors are assured of India’s development. He said, Goods and Service Tax collection has consistently remained above one lakh crore rupees during the last several months.

He said, India’s foreign exchange reserves exceeded 630 billion dollars and the country’s exports are also growing rapidly, breaking several past records. He said, the government has launched 14 key Production Linked Incentive schemes with an outlay of more than one lakh 97 thousand crore rupees to fully realize the potential of the manufacturing sector and to create new opportunities for the youth. He also said, these PLI schemes will not only help transform India as a global manufacturing hub but also create over 60 lakh jobs. Stressing on the role of MSMEs in India’s prosperity, he said, they have been the backbone of the country’s economy and a driver of Atmanirbhar Bharat.

The President pointed out that infrastructure is the foundation for development in any country. He said, investment in infrastructure not only generates lakhs of new jobs, but also facilitates ease of doing business and promotes economic activities. He said the government has integrated different Ministries to work in a synergised manner under the Pradhan Mantri Gatishakti National Master Plan to accelerate infrastructure development.

Talking about India’s efforts during the Covid-19 pandemic, the President said, the vaccination programme has proved India’s capabilities in the fight against it. He said, the country has crossed the milestone of administering more than 150 crore vaccine doses in less than a year. More than 90 percent of adult citizens in the country have received the first dose of the vaccine, while more than 70 percent have received both the doses. He said, indigenous vaccines are playing a vital role in making the whole world free from the pandemic and saving the lives of crores of people. He lauded the contributions of health and frontline workers in the fight against the Covid-19 pandemic.

Highlighting the various initiatives of the Government, the President said, Pradhan Mantri Ayushman Bharat Health Infrastructure Mission will not only help in meeting the present health needs, but also prepare the country for any crises situation in future. He said, due to the sensitive policies of the government, now health services are easily accessible to the common man in the country. More than 80 thousand health and wellness centers are functional and crores of Ayushman Bharat cards have helped the poor. He added that the government has reduced the cost of treatment by making medicines available at affordable prices through more than eight thousand Jan Aushadhi Kendras.

Reiterating the Government’s mantra of Antyodaya, he said, the government is giving free ration every month to all the poor under the Pradhan Mantri Garib Kalyan Anna Yojana. He said, Jan Dhan-Aadhaar-Mobile (JAM) trinity has empowered citizens. He said, crores of beneficiaries have got the benefit of direct cash transfer during the pandemic due to the connectivity of more than 44 crore poor countrymen with the banking system.

Talking about the success of Pradhan Mantri Awas Yojana, the President said, more than two crore pucca houses have been provided to the poor under the scheme. He said, Jal Jeevan Mission has started making a big difference in the lives of the people. Mr. Kovind said, the government is working relentlessly to empower the rural economy and the farmers of the country and the government has made a record government procurement of food grains. He said, the country’s agricultural exports have also increased at a record level due to the efforts of the government. He said, agriculture exports have registered a growth of more than 25 percent in the year 2020-21.

He highlighted that more than 11 crore farmer families received one lakh 80 thousand crore rupees under the PM-KISAN scheme. He said, in order to ensure remunerative prices to farmers for their crops, it is necessary that their products reach the right market. In this direction, the government has endeavoured to open new avenues of prosperity for the farmers by launching Kisan Rail Seva. He said, the government is also making investments for developing infrastructure near farmlands.

He added, thousands of projects have been approved under the Agriculture Infrastructure Fund with the corpus of one lakh crore rupees. He said, the government has also taken forward the plans for interlinking of rivers. The Ken-Betwa link project is to be completed at a cost of 45 thousand crore rupees which will help in ending the water crisis in Bundelkhand region.

Stressing on the need to empower women, the President said, the Government has taken several steps for their welfare. He said, it has raised the age of marriage for women to 21 years to bring gender equality.

He said, the government has made a beginning to liberate the society from the manifestly arbitrary practice of Triple Talaq by making it a criminal offence. A provision has also been made for the Gender Inclusion Fund in the National Education Policy to promote learning capability among girls. He said, the government has also approved the admission of women cadets in the National Defence Academy and the first batch of women cadets will enter the NDA in June this year.
Mr. Kovind said, the Centre is implementing a new National Education Policy to give shape to the resolve and potential of Atmanirbhar Bharat. He said, local languages are also being promoted through the policy.

The President asserted that the government is working with utmost determination to ensure a safe and secure India and the country is becoming self-reliant in the defence sector. He said, the country is making special efforts for the development of neglected states and regions. He said, the government has started a new central sector scheme for the industrial development of Jammu and Kashmir. He said, many important steps have also been taken to provide better opportunities for education, health and employment to the people of Jammu and Kashmir.

At present, works are in progress on seven medical colleges and two AIIMS, one in Jammu and another in Kashmir. Construction of an IIT and an IIM in Jammu is also going on in full swing. He said, Border Roads Organization has constructed a transport-worthy road at 19 thousand feet, the highest altitude for such a road, at Umling La Pass in Ladakh. Even the most remote villages like Demchok in Ladakh, Joling Kong in Uttarakhand and Huri in Arunachal Pradesh have been connected by modern roads.

He said, the government is committed to the sustainable development of all the states of the North East. He said, in these states, basic amenities and economic opportunities are being developed at every level.

He said, Rail and air connectivity are no longer a dream for the people of the North East. On Afghanistan, the President said, in spite of the prevailing situation, India launched Operation Devi Shakti. He said, despite the challenging conditions, India successfully airlifted a number of Indian citizens and many Afghan Hindu and Sikh minorities from Kabul. He said, India is helping Afghanistan by delivering medical supplies and food-grains.

On India’s achievement in the Tokyo Olympics, the President said, the world has witnessed the country’s youth potential during the games. He said, India won seven medals in its best performance ever in the international competition. He said, in the Tokyo Paralympics too, Indian para-athletes set a record by winning 19 medals.

He said, the government believes that remembering the past and learning from it are equally important for a secure future of the country. Observance of ‘Veer Bal Diwas’ on 26th December in the memory of sacrifice of Sahibzadas and ‘Vibhajan Vibhishika Smriti Diwas’ on 14th August is a reflection of this thinking.

The government also decided to celebrate the birth anniversary of Bhagwan Birsa Munda on 15th November as ‘Jan-jatiya Gaurav Diwas’ as a tribute to him.