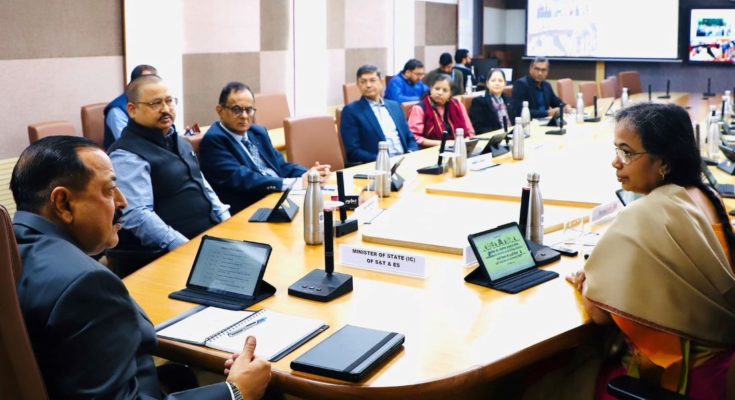 New Delhi:  Union Minister for Science & Technology, Dr Jitendra Singh, who is also the Vice President of CSIR (Council of Scientific & Industrial Research), today announced the launching of “One Week, One Lab” countrywide campaign from 6th January, 2023. In this, each of the 37 premier Laboratories/Institutes of CSIR spread across the country will, one after the other in every successive week, showcase their exclusive innovations and technological breakthroughs to the people of India.

Addressing the 200th Governing Body Meeting of CSIR at the Science Centre in New Delhi, Dr Jitendra Singh said, the “One Week One Lab” theme-based campaign is expected to ignite the minds of young innovators, students, Start-ups, academia, and industry to look for opportunities through deep tech ventures.

Dr Jitendra Singh recalled that Prime Minister Narendra Modi, who is President of the Council of Scientific and Industrial Research (CSIR), had chaired the meeting of CSIR Society on 15th October, 2022 and appreciated the efforts of CSIR in the past 80 years.

The Prime Minister had urged CSIR in the Society meeting to develop a vision for 2042 when CSIR turns 100 years old and also highlighted the significance of documenting the journey of the past 80 years, which can help take a review of progress achieved and identify areas of lacunae which can be addressed. He also suggested that a virtual summit of all labs can be held regularly in which they can learn new things from each other\’s experience.

At the 200th Governing Body Meeting of CSIR today, Dr Jitendra Singh announced a Special Call for Research Grant Proposals for Women Scientists. The call for research grant proposal is for women scientists including those who have taken a career break and are interested in returning to research and reestablishing their career. Keeping in tune with the transformations happening in CSIR, the Minister of Science and Technology also released the new tagline, “CSIR-The Innovation Engine of India”.

The implementation of paperless E-office across all labs with effect 01 April 2023 and E-performance appraisal system for admin cadre staff for Reporting Year 2022-2023 was also approved.

Dr Jitendra Singh informed the Governing Body Members that he will soon write to Union Minister for Education Shri Dharmendra Pradhan and all the Chief Ministers of States to evolve a mechanism for wider sharing of CSIR technological breakthroughs and innovations in schools for students and aspirants who want to pursue fundamental science and research as a strong career option.

Dr Jitendra Singh said, the legacy of CSIR is built on the cumulative contribution of its several national laboratories and institutes. He said, each laboratory of CSIR is unique and specializing in as diverse areas as genomics to geology, material technology to microbial technology and food to fuel.

Dr Jitendra Singh called upon a pool of over 4,500 CSIR scientists to reorient and revitalize the organization to emerge as Global Centers of Innovations in the Amrit Kaal. He said, they must focus on emerging innovations in areas like Hydrogen in the energy transition, Carbon capture and storage, Accessible solar power, Plastic recycling and Cheap energy storage.

Dr N Kalaiselvi, Director General, CSIR gave a presentation on CSIR activities and achievements from the 199th to the 200th GB meetings.

Dr Jitendra Singh said, CSIR breakthroughs in areas like Drone, Heliborne technology, state of the art Sewage cleaning machines, Aroma Mission has opened up huge opportunities for developing meaningful and equal stake partnership among Research, Academia and Industry. The Minister said, the state-of-the-art Heli-borne survey technology with cooperation from Jal Shakti Ministry was applied last year in States of Rajasthan, Gujarat, Punjab and Haryana and this could play an important role in positively contributing to Prime Minister Narendra Modi’s Vision and Mission of “Har Ghar Nal Se Jal”. Similarly, the mechanized sewage cleaning system developed by CSIR for wider dissemination will help in achieving the target of Swachh Bharat Mission, he added.

CSIR was established on 26 September 1942 and was registered as a CSIR Society under the Societies Registration Act, 1860. The first meeting of the Governing Body was held on 09 March 1942 that framed the Bye Laws for the Council amongst other agenda items.