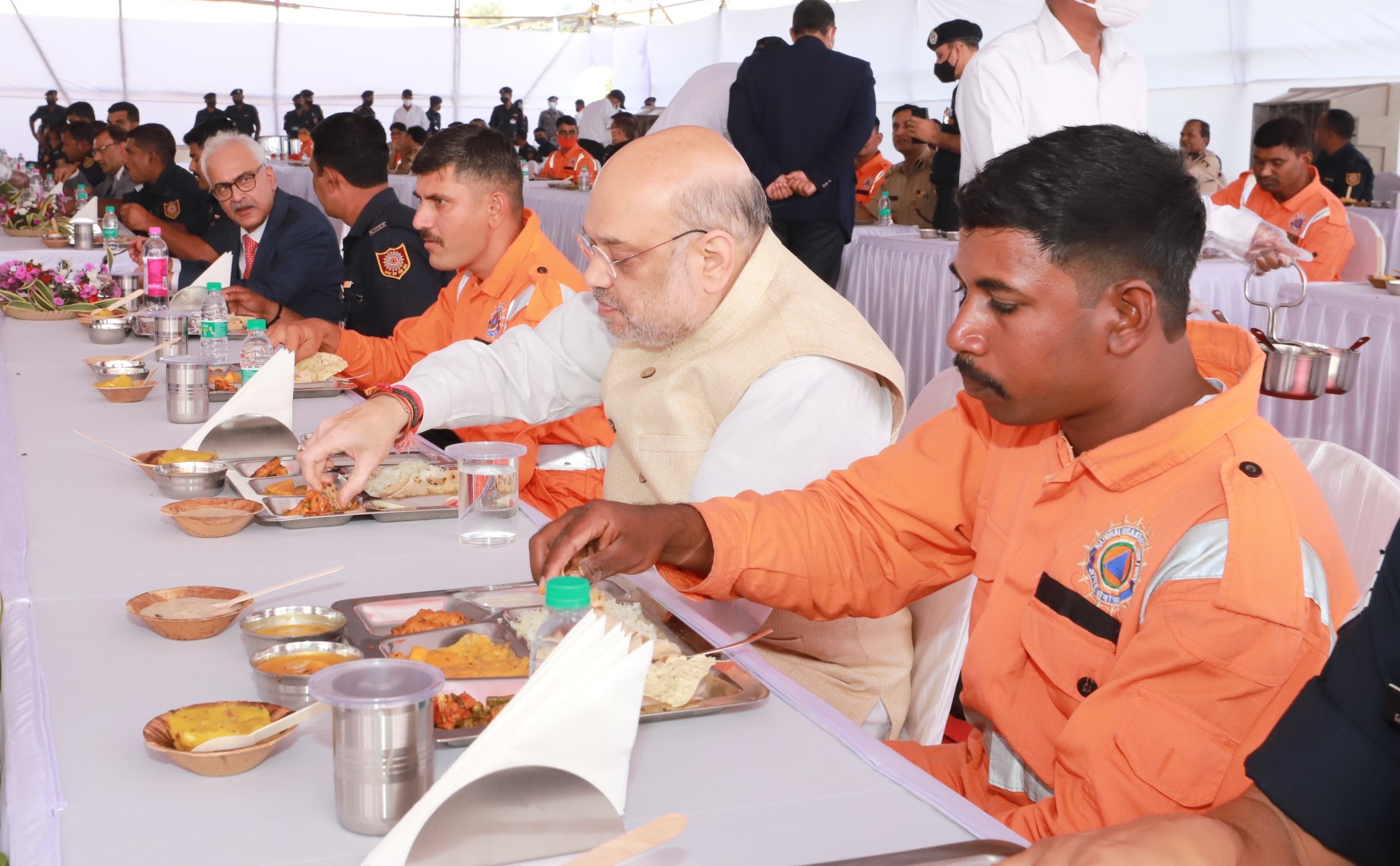 New Delhi: The Union Home and Cooperation Minister, Amit Shah, on the second day of his Maharashtra visit today formally inaugurated the Camp Complex of the 5th Battalion of the NDRF in Pune, inspected the new campus of the CFSL and inaugurated its new building. Shri Amit Shah also had lunch and interacted with NDRF personnel. Several dignitaries including the Union Home Secretary and Director General of NDRF were also present on the occasion. The newly constructed complex of NDRF has facilities like barracks for Jawans, a Mess, accommodation for officers and Jawans, a school, a Unit hospital, ATM, shopping complex and helipad.

In his address on the occasion, the Union Home Minister said that NDRF is a symbol of trust and its mere presence creates a sense of security in the minds of the people.In such a short span of time, 16 battalions of the NDRF are doing their job very well all over the country. NDRF is a symbol of trust and their mere presence during any kind of disaster, floods, landslides, storms, building collapses or lightning strikes, during these incidents people are relieved and are assured that as soon as NDRF Jawans reach the spot that they are safe, and this creates a sense of security amongst the people.

Shah said that you have earned the trust of the people in the country in a very short span of time and this fame has been achieved not only in India but in many countries. NDRF was also sent abroad many times as well, and there also you have delivered very good results and left a very good impression on behalf of the nation and that can only be possible if you believe in Vasudhaiv Kutumbakam. The sensitivity and dedication of NDRF towards the entire human race is a reflection of this should be maintained.

The Union Home Minister said that much remains to be done for NDRF to acquire expertise in many other areas, to make NDRF and SDRF work in tandem and to make SDRF at par with NDRF under the aegis of NDRF. Unless there is training and practice of NDRF and SDRF working together, we will not be able to save people during every calamity in such a large country.

Shri Amit Shah said that NDRF was formed in 2006 and at that time there were eight battalions consisting of BSF, CRPF, ITBP, CISF personnel.Today this Force has 16 battalions and Regional Response Centers and regional response teams are also present in 28 cities.

The NDRF should form its own team to study all aspects and dimensions of disaster areas around the world and ensure that that team leads the NDRF towards making it the best disaster response force in the world. Today NDRF is being counted among the best and largest disaster response forces in the world, and this is a matter of great pride for the country and for the Government of India. The Union Home Minister said this is due to your dedication, history and devotion to duty.

The Union Home and Cooperation Minister said today the laboratory of the Forensic Science Laboratory Center, Pune has also been dedicated. So far, there are seven Central Forensic Scientific Laboratories in the country. The foundation of forensic science was laid in India in 1904 and it began in Shimla, Himachal Pradesh. But if we have to strengthen the internal security and judicial system of a country like India in this area, then we still have to do a lot of work. The Prime Minister, Narendra Modi, when he was the Chief Minister of Gujarat, had planned intensively to make the Forensic Science Laboratory of Gujarat world class and today the Gujarat FSL is known as one of the best FSLs in the world.

If we can do this in the coming five to ten years, then a legal change can also be made in the country that we can make the visit of the FSL team mandatory in the cases of punishment of 6 years or more. I am sure that the day we do this, the proof of conviction will increase tremendously and will be of great help in both internal security and crime control in the country.

The Union Home Minister said that some people ask what will change today, I want to tell them that if we maintain this mind set, then we will never be able to shape the future. The seed we sow today will become a Banyan tree in the years to come and the Modi government is planting these seeds. We will also enhance the manpower position of CFSL. Along with this, efforts will also be made to ensure that scientific evidence is sent directly to courts and police stations electronically.

The Government of India has developed many softwares, which are also being linked to the court and FSL, so that no person or prosecutor in the court will be able to say that the FSL report is yet to be received. The report will reach the court records directly and a copy will go to the police station and a copy will go to the Home Department of the state. The day this system is established, many delays will be eliminated and using science we will be able to increase proof of conviction. He said there are many internal security challenges before us today; such as narcotics, arms smuggling, counterfeit currency, cross border infiltration etc.