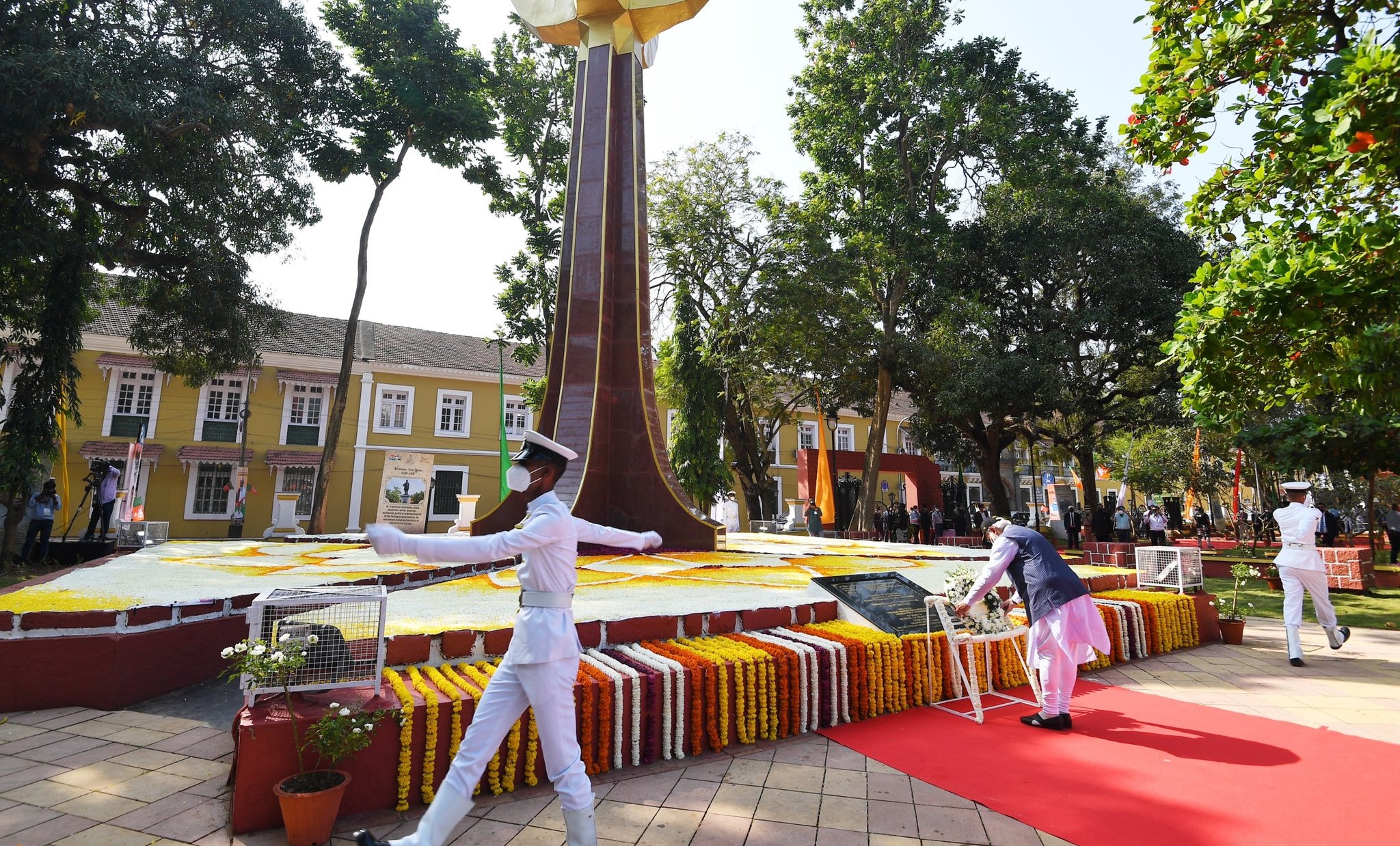 Addressing the gathering, the Prime Minister remarked that the land of Goa, the air of Goa, the sea of ​​Goa, have been blessed with a wonderful gift of nature. And today this enthusiasm of all, the people of Goa, is adding to the pride of liberation of Goa. He said that he had the privilege of paying homage to the martyrs at the Shaheed Memorial at Azad Maidan.

After paying homage to the martyrs, he also witnessed the cell parade and fly past in Miramar. He also expressed his happiness for honouring the heroes of ‘Operation Vijay’ and veterans on behalf of the country. The Prime Minister thanked the spirit of vibrant Goa for providing so many opportunities, so many amazing experiences that Goa has brought together today.

The Prime Minister noted that Goa came under Portuguese domination around the time when most of the rest of India was under Mughals. India witnessed many upheavals after that. Shri Modi noted that even after centuries and the upheaval of power, neither Goa forgot its Indianness, nor did the rest of India forgot Goa. This is a relationship that has only become stronger with time.

The people of Goa also did not allow the movements for liberation and Swaraj to slacken. They kept the flame of freedom burning for the longest time in the history of India. This is because India is not just a political power. India is an idea and a family to protect the interests of humanity. The Prime Minister remarked that India is a spirit where the nation is above the ‘self’ and is paramount. Where there is only one mantra – nation first. Where there is only one resolve – Ek Bharat, Shreshtha Bharat.

The Prime Minister said there was a turmoil within the heart of people all over India because a part of the country was still not free and some countrymen had not got freedom. He remarked that if Sardar Patel had lived for a few more years, Goa would not have had to wait so long for its liberation.

The Prime Minister bowed to the heroes of the struggle. 31 Satyagrahis had to lose their lives in the Satyagraha of Goa Mukti Vimochan Samiti. He urged everyone to think about these sacrifices and about heroes like Punjab’s Veer Karnail Singh Benipal. “History of Goa’s freedom struggle is not just a symbol of India’s resolve but is a living document of India’s unity and integrity”, said the Prime Minister.

He remembered that some time ago when he went to Italy and Vatican City he had the opportunity to meet Pope Francis. The Pope’s attitude towards India was equally overwhelming. The Prime Minister also talked of his invitation to the Pope to come to India. Shri Modi recalled Pope Francis’ reaction to his invitation “This is the greatest gift you have given me”, the Pope had said. The Prime Minister highlighted this as Pope’s love for India’s diversity, our radiant democracy. The Prime Minister also talked about the handing over of the holy relics of Saint Queen Ketevan to the Government of Georgia.

Noting Goa’s strides in governance, the Prime Minister said that the natural beauty of Goa has always been its hallmark but now the government here is cementing another identity of Goa. This new identity of the state is that of being the foremost in every task of governance. Elsewhere, when the work starts, or the work progresses, Goa finishes it. The Prime Minister gave the example of Goa’s stellar making the state open defecation free, immunisation, ‘har ghar jal’, registration of births and deaths and other schemes for enhancing the ease of life for the people.

He praised the performance of Swayampoorna Goa abhiyan. He complimented the Chief Minister and his team for the achievement in governance of the state. The Prime MInister also talked about the steps taken for the promotion of tourism in the state. He complimented the state for successfully holding the recently concluded International Film Festival of India.

The Prime Minister paid tribute to the late Shri Manohar Parrikar. “When I see these achievements of Goa, this new identity being strengthened, I also remember my friend Manohar Parrikar ji. He not only took Goa to new heights of development, but also expanded Goa\’s potential. How can one remain devoted to his state, his people till his last breath? We saw this in his life”, he said. He concluded that the nation saw the reflection of honesty, talent and diligence of the people of Goa in Manohar Parrikar.