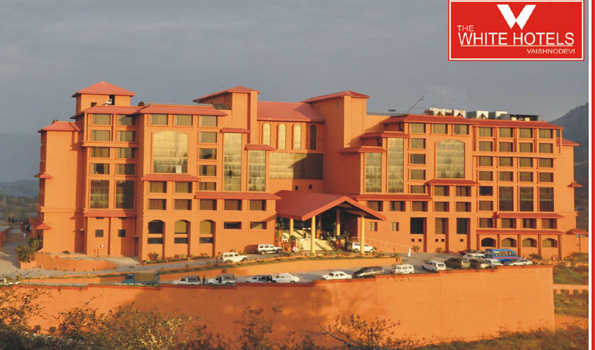 A luxurious hotel “The White Hotels” with five star facilities in Katra town of Reasi district has offered special discount to passengers reaching to the Shri Mata Vaishno Devi base camp in Vande Bharat Express.

The Train-18 will begin it’s commercial run from October 5.

He said that the offer will remain from October 6 to 31, adding, “50 percent discount will be given on Rack Rate and is only for rooms facility.”

The General Manager further said that the person reaching Katra by this train, has to show the Railway ticket of Vande Bharat.

“They can pre book if they are coming by ‘Vande Bharat’ or they can make their bookings while their journey,” he added saying that an offer is subjected to availability of rooms.

Vande Bharat Express to run from Delhi to Jammu to Katra and vice versa twice a week from October 5.

The distance of 10 to 11 hours, will be cut short by 3 to 4 hours as the Express train will cover it in just seven hours.

Famous as ‘Train-18’ and commonly known as ‘Chair Car’, the train, which was flagged off on February 14 by the Prime Minister Narendra Modi between Delhi-Varanasi, will run between three prominent cities including Jammu.

The ‘Vande Bharat Express’ will run on three routes including Delhi-Jammu-Katra, Delhi-Mumbai and Delhi-Howrah.

Including Rajdhani, journey from Jammu to Delhi in all super fast trains are covered in 10-11 hours but once ‘Train-18’ be operational, it will cover the same distance in 7 hours, which will save around 3 to 4 hours. (UNI)